How did Moderna reach the moon? Mars next?

Moderna stock has rallied from around $104 per share at the end of 2020 to about $412 as of Wednesday, an increase of over 3.5x, making the Covid-19 vaccine maker’s share the top performer in the S&P 500 so far this year. What made the stock jump this high and at this pace?

Nov. 30, 2020- Moderna Inc., the American pharmaceutical and biotechnology company based in Cambridge, Massachusetts announced that its third phase of its Covid-19 vaccine indicated an efficacy of 94.1%. Right after the announcement, governments all around the world rushed to order doses and to stock up on the vaccine. Canada signed new supply agreements and ordered a total of 40 million doses, the U.S. exercised its first option for an additional 100 million doses and so on so forth around the globe. This was considered amazing news by investors as it meant life might get back to normal, which translated to the stock reaching an all-time high of $153.

A new market to sell vaccines

Jan. 06, 2021 - After receiving an emergency FDA authorization for its Covid-19 vaccination in December, the Europe Commission authorized the use of the vaccine in Europe, making it the second coronavirus shot to be cleared for general use across the EU, thus giving the company a huge opportunity as at that period, the vaccination program was slowly progressing, and the demand was high. Once again, this paved the stock’s way to reach a second all-time high of $186 one month later.

The beginning of the ascent

Jun. 18, 2021 - This is about when the stock began its rally from around $200 to current levels. The main factor that contributed to the surge was the new variants. When the vaccine first came out, people thought that it would solve everything, but in fact it was not the case. The virus turned out to be more difficult to contain, even in countries with high vaccination rates, due to the emergence of new virus variants. For example, the seven-day average of Covid-19 cases in the United States has surged from roughly 22K in early July to over 124K now.

Jul. 15, 2021 - Moreover, Moderna stock was included in the S&P 500 in July which made the stock surge 10% the next day. Index funds that track the S&P 500 and managed funds that are benchmarked to the S&P 500 saw considerable demand for the stock as a result of this event. This momentum has also pushed the stock up considerably in recent weeks. Moderna is now the S&P 500’s best-performing stock this year, topping the index’s existing leader, L Brands Inc. At this point, the stock was around $201 and since then, it never fell below this level.

Aug. 6, 2021 - Moderna announced that its vaccine’s protection begins to wane after several months and holds through six months. These advances support the need for booster vaccinations, and Moderna is well positioned to serve this market thanks to its mRNA technology, which can be easily altered to combat new variations. Investors interpreted this news as an indicator that Moderna's highly profitable Covid-19 vaccine revenues will likely continue in the foreseeable future (rather than being a one-time pandemic product), prompting them to raise their valuations of the firm. Right after, the stock’s price reached its all-time high of $485.

Impact of these events on the stock's price 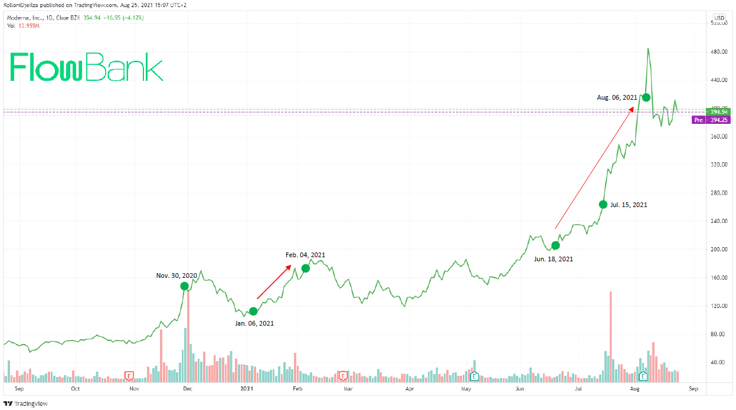 The pandemic is far from being contained and new variants are continuing to surge, creating more demand for vaccines. Countries are exercising their put options and purchasing more doses in order to boost their vaccination program and to prepare for rising cases making the company forecast a boost in sales that might last several years. Moreover, other news are also contributing positively to the demand, such as the U.K. approving the drugmaker’s COVID-19 vaccine for children aged 12 to 17.

The company is also working on new vaccines and medicines for cancer, HIV, Zika as well as heart diseases. If those vaccines turn out to be efficiently working, it could translate into huge profit opportunities for Moderna. Indeed, approximately 38 million people worldwide are currently living with HIV… Imagine what finding a cure could mean for the company. On top of helping fight one of the most difficult disease, it will make the heads of all the news worldwide turn, which is good marketing and can help raise the firm’s valuation.

However, some analysts are dubitative over the company’s ability to maintain growth and margins going forward, as vaccination rates improve globally and as competition in the vaccine market mounts, with the likes of Novavax, which has a cheap and highly effective shot, likely to hit the market later this year. Moderna may thus face pricing competition in the years to come. According to Visible Alpha's consensus predictions, revenues from Moderna's Covid-19 vaccine will begin to drop significantly in 2023 as more people throughout the world are vaccinated and demand for booster shots may wane.

Bank of America’s analyst, Jeff Meacham believes its valuation is ridiculous. He claims that to justify it, Moderna must deliver 1 billion to 1.5 billion doses of its Covid-19 vaccine each year through 2038 in addition to having each of its pipeline candidates become viable products. Moreover, Covid was a unique situation and that Moderna managed to develop the vaccine rapidly, the timing of those new vaccines that target other diseases is not guaranteed.