Two years ago today, a mysterious Dutch investor by the name of Plan B, published a study modeling the value of Bitcoin with surprising accuracy.

We can probably all agree on at least one point: the theoretical value of BTC remains impossible to assess. No earnings to apply a multiple to, no dividends to calculate its yield, or net assets to establish a book value. Some will point out that investors in physical gold face the same problem when it comes to comparing current prices with a hypothetical "fair value". But advocates of the yellow metal will point to the fact that there is real demand from jewelers.

However, "Plan B", a Dutch institutional investor, has tried to predict the theoretical value of bitcoin over time. This quantitative model, which is based on asset scarcity, was published on March 22, 2019. Called "Stock-to-flow," the model predicted a rapid rise in bitcoin's value to $55,000 once the May 2020 halving occurred. At the time of Plan B’s first publication, bitcoin was trading below $5,000. Needless to say, most observers did not take this study seriously.

Since then, Plan B has continued to regularly update its estimates online. The statistical significance of the model is troubling, and the projections of the bitcoin price may make your head spin. Below, we review the principles of this model. This article also includes the latest projections of the model as well as its limitations.

''The current supply is about 18.5 million and the production of new Bitcoins drops by half every four years.''

A high price comes with scarcity

In the economic sense, scarcity expresses the fact that a resource or asset is produced in limited amounts. This is the case, for example, with gold or collectible coins.

Bitcoin is the first digital asset that cannot be copied, duplicated, hacked, or forged. When it was launched in 2009, its developer(s) stipulated in the protocol that Bitcoin production would be capped at 21 million by 2140. The current supply is about 18.5 million, and the production of new Bitcoin drops by half every four years.

Today, there are less than 0.4 Bitcoins per millionaires on the planet. This ratio is expected to decrease, since the number of millionaires is growing faster than the number of Bitcoins in circulation. Bitcoin is thus the first "rare" asset that can be transferred digitally. This digital scarcity surely has a value, but is it even possible to estimate?

In simple terms, the Stock-to-Flow (SF) model is a way to measure the scarcity (or abundance) of a commodity. It is the total amount of reserves of a resource (the "Stock") divided by its annual production (the "Flow").

The "Stock-to-Flow" therefore measures the annual marginal, or extra supply in relation to the existing reserves. The higher this ratio is, the less supply is renewed and therefore the more the resource or asset in question can be considered "scarce".

This model is generally applied to precious metals, such as gold. The current reserves of gold (the "Stock") are estimated to be around 190,000 tons. The "Flow" corresponds to the amount of gold extracted each year, which is about 3,200 tons. Dividing the total supply by the "Flow", we get a ratio of ~59. This tells us that at the current production rate, it would take about 59 years to mine 190,000 tons of gold.

Silver comes next with a SF of 22. Palladium and platinum, on the other hand, have a SF of just over 1. Consumer and industrial metals have little or no scarcity characteristics-which explains an even lower stock-to-flow ratio.

The stock-to-flow model and bitcoin

Given the unique properties of Bitcoin (e.g., limited supply over time), the stock-to-flow model seems to be applicable to Bitcoin in the same way it is with precious metals.

''The estimated capitalization of Bitcoin after the halving in May 2020 is $1 trillion.''

Bitcoin currently has a "Stock" of about 18,500,000 tokens and a "Flow" of 0.33 million/year, which gives us a SF of 55.9. Before the May 2020 halving, Bitcoin's SF was 25, which was even lower than a few years ago. However, it is expected to rise sharply in the coming years. In terms of scarcity, Bitcoin is already comparable to gold, but over time, Bitcoin will become an even scarcer resource than gold.

The stock-to-flow and asset value

Plan B hypothesized that scarcity, as measured by SF, has a causal relationship to the value of an asset. As mentioned above, the capitalizations of metals with high SF are significantly higher. On this basis, "Plan B" built a statistical model on gold, silver, and Bitcoin. A linear regression shows a statistically significant relationship between SF and the value of these other assets since the coefficient of determination is 95%. In simple terms, there is a very high probability that the scarcer a resource is, the higher its value. Therefore, the FS and the value of Bitcoin vary over time, and the higher the SF, the higher the Bitcoin’s value.

A graph below shows the historical relationship between the 365-day moving average of Bitcoin's FS and its price. The distance in time to the next halving is represented by colors (see legend on vertical axis). To estimate the price of Bitcoin, the model suggests using the 365-day average of the SF ratio.

Thus, the estimated capitalization of Bitcoin after the May 2020 halving is $1 trillion, or a Bitcoin price of $55,000. The same model predicts that the price of Bitcoin should be close to $100,000 by the end of this year. And much more in the years to come... 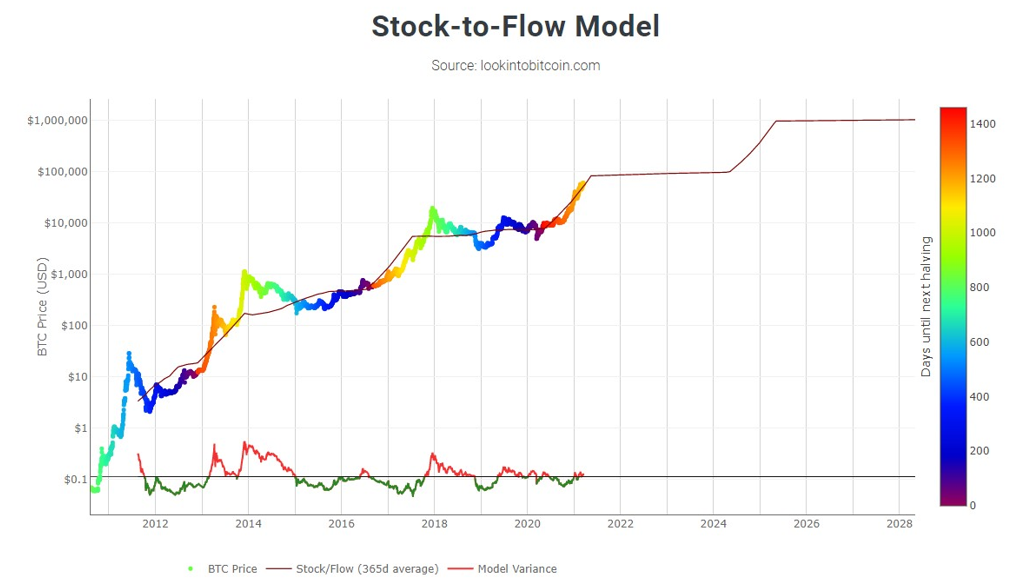 What are the factors that could cause such a price surge? As we have seen in recent months, a growing number of institutional investors now view Bitcoin as "digital gold" and a way to protect themselves against competitive devaluations of "fiat" currencies.

Bitcoin could also become a means of payment. For example, companies such as Square or Paypal now allow their customers to store, buy and sell cryptocurrencies.

The demand for Bitcoin could therefore increase sharply in the coming years even as the marginal supply continues to decline. All things being equal, the effect on the price should therefore be positive.

The limits of the stock-to-flow model

As a reminder, this model is based on only one assumption: that of scarcity. For some, the model is invalid if Bitcoin loses this quality of scarcity of supply. It should also be remembered that Bitcoin has only been around for about ten years. Perhaps more data is needed to give credibility to the "Stock-to-Flow" model.

Other factors that are not considered by the model and could influence the price of Bitcoin --the piracy of certain exchanges, the potential banning of Bitcoin by certain governmental authorities, etc. -- are not taken into account.

Finally, the valuation of an asset requires taking into account its volatility. Bitcoin's volatility remains very high and can therefore test the reliability of the model.