Are investors worrying too much about the US consumer?

While fears over the health of the US consumer are high, data and earnings reports reveal a strong, but rapidly changing spending patterns.

Is it time to worry and what should we watch out for?

Investors have all eyes on the US consumer, as a weakening could signal the beginning of a significant slowdown. As consumer spending is by far the biggest contributor to the US economy, the continuing strength of the consumer is also a reason why the Federal Reserve has accelerated its path to tightening credit conditions, with the hope it will cool the economy and bring inflation down.

While consumer sentiment surveys may suggest the US consumer is having difficulties, the reality is more nuanced. Consumers are changing their spending patterns and data from retail sales still point to growth, although it has come down from elevated levels.

Given the high uncertainty from the war in Ukraine, the Covid variants earlier in the year, supply chain issues, and higher costs, still-strong retail sales should be interpreted as a positive signal. Looking back at the recession in 2008 or in 2020, retail sales growth turned negative, but in today’s environment, year-over-year retail sales growth is still healthy, despite a deceleration from elevated levels.

In terms of savings, consumers’ cash piles accumulated from the stimulus checks and lockdown era have diminished, but the savings rate still sits at 6.2% (March), a reasonable number despite being at its lowest level since 2013. 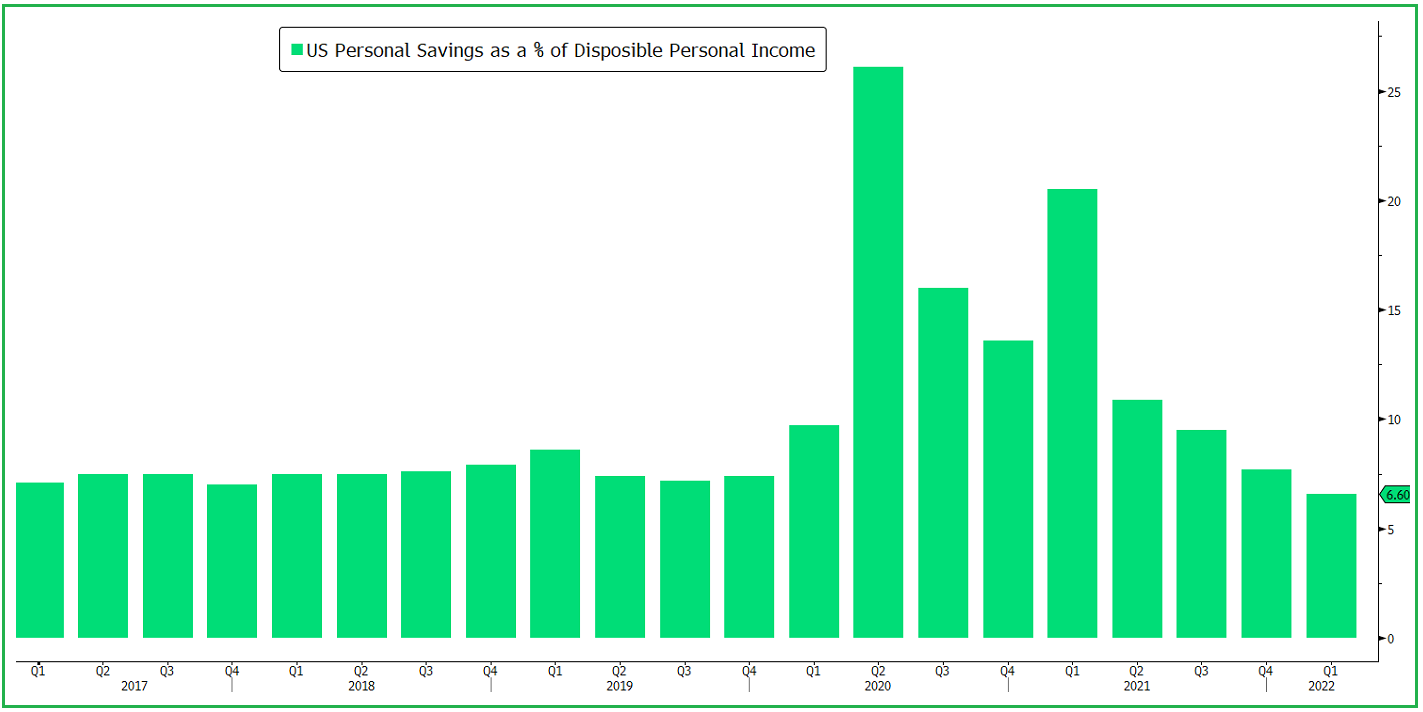 Despite the notable deceleration in savings, a report by Northwestern Mutual found that 60% of respondents built up their savings in the last 2 years, and 69% of those respondents plan to maintain their new savings rate going forward.

Spending on travel and leisure

With the reopening of the economy, consumers are prioritising spending on travel and entertainment. Spending on airline tickets, restaurants, and leisure such as the outdoors is surging as consumers are looking to travel more, after being restricted for nearly two years. Earnings from retailers revealed shoppers are spending more in-person than online, and are spending less on appliances, electronics, and exercise equipment.

Earnings from discount retailers revealed consumers are turning to discount chains for household items to offset rising costs for food and fuel. Consumers are also opting for store brands instead of the more expensive branded items. Markets tumbled after Walmart and Target reported earnings, worrying about a strong deceleration in the strength of the US consumer, but Dollar General and Dollar Tree both boosted their outlook for the year. Earnings suggest consumers are switching spending patterns, not stopping.

The picture is much brighter for higher-income consumers, which are much less affected by high food and gas prices. Similarly, those households tend to still have a lot of excess cash from the pandemic. Ralph Lauren earnings reinforced the view that spending from higher-income consumers remains strong and unaffected by the higher prices of essentials. Executives from major US banks, which tend to have a wide picture of the US consumer, also share the view that consumers remain in a good shape, particularly those of the higher-income segment.

What should investors watch out for?

Fashion retailers selling goods typically for middle-income shoppers (A&F, Gap) have said they would have to take markdowns to clear excess inventory. Thus, investors should keep an eye on those companies quickly building inventories, and those that may not have sufficient pricing power to combat rising costs to defend margins.

The surge of consumer debt as reported by credit card companies and home equity loans being maxed out is a worrying sign. For now, it remains isolated as consumers are not maxing out loans across the board, but it is a sign that macro headwinds are making their way into the real economy. Rising interest rates and lower stock markets eat into consumer spending power, or at least their willingness to spend.

Employment data is solid, supporting the view that despite depressed consumer sentiment, the economy is still healthy, with many businesses still falling short of job seekers to hire. The US consumer should remain in good shape, suggesting a US recession is not on the cards for now. 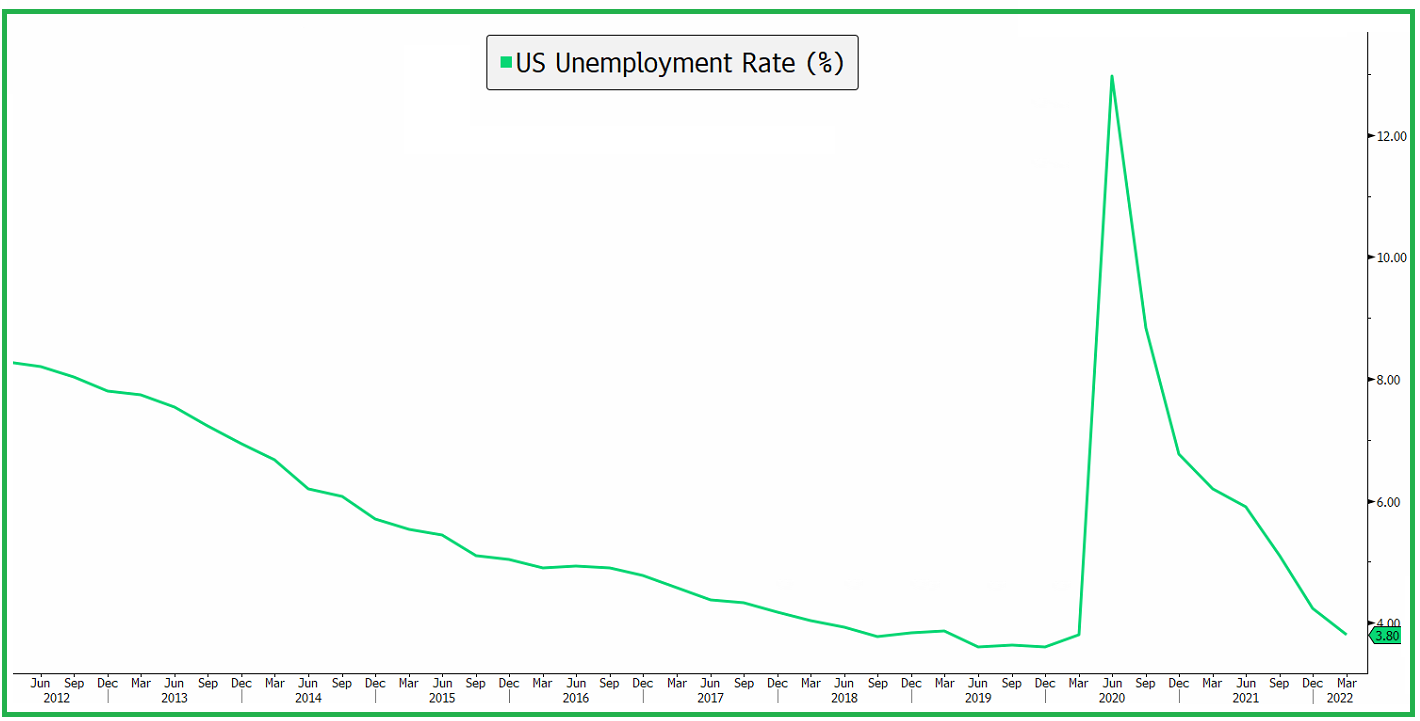 The elephant in the room: Inflation. Cost increases are said to be the largest struggle for consumers and businesses and are the primary reason for the Federal Reserve to tighten monetary conditions at an unprecedentedly rapid pace. 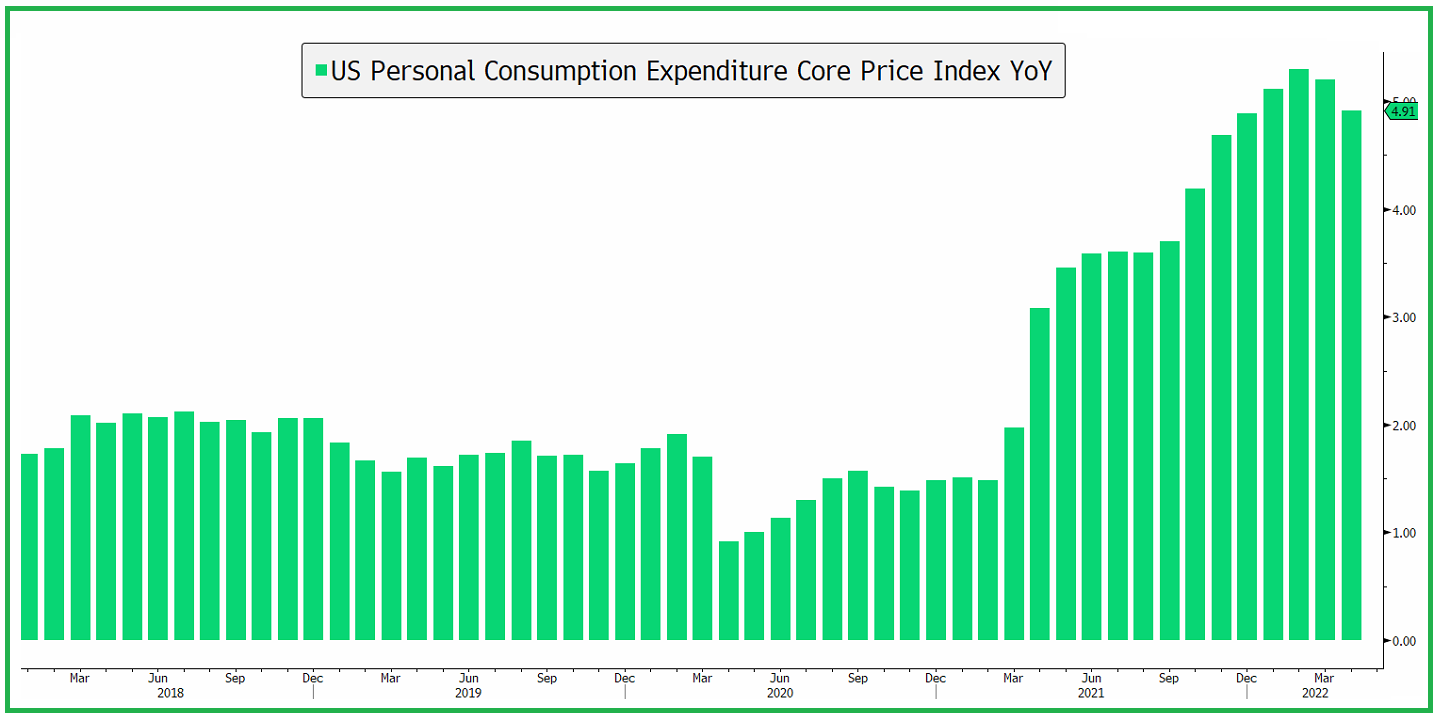 If inflation data continues to cool down, as we believe, the Federal Reserve should have more flexibility to adjust conditions to help the economy if the US consumer weakens significantly down the road. In the meantime, the consumer remains healthy and there are no signs of an imminent recession.

Low readings on consumer sentiment should be ignored for now, with the focus on actual consumer spending, which remains strong. Segments of the market such as e-commerce and non-essential purchases which have benefited from the pandemic area are likely behind us, with travel and leisure now taking center stage. Businesses with strong pricing power should be able to withstand inflationary pressure better to navigate the market cycle. In our view, recent lower inflation readings are positive for the US consumer, and investors should not worry yet about the health of the consumer. More positive consumer sentiment could be ahead as key areas of concern such as lockdowns in China, the war in Ukraine, rising interest rates, and inflation could see some relief. In the meantime, investors should view recent earnings reports as a glass half full, shaken by the multitude of macro headwinds.