Is ARK’s Cathie Wood Right that a Commodities Market Crash is Coming?

Cathie Wood didn’t use the word 'crash' in fairness, she said "We will have a very serious correction in commodity prices" once the global economy fully reopens.

Commodity markets have been on fire this year, accelerating from an already stellar 2020. Gold led the early gains off the market lows in March last year but other industrial and agricultural commodities have taken the helm this year amid growing concerns over supply shortages and rising inflation. Soybeans are up nearly 50% in four months, while gasoline is up over 40% with gains exacerbated by the North American pipeline cyber-attack.

Data from the CFTC shows fund managers have been the most bullish on commodities in a decade, with net bullish contracts topping 2.5M. This clearly demonstrates a strong market but contrarians will argue that positioning has become unsustainably stretched in one direction. 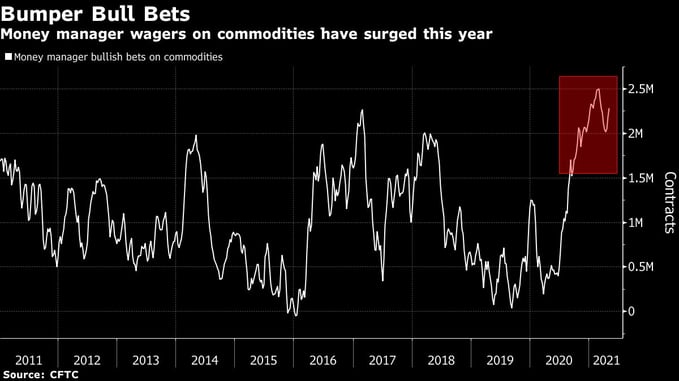 Looking at ETF inflows offers up another demonstration of investors clambering for commodity-based investments this year. The five largest exchange-traded funds saw record inflows in April.

So why is Cathie Wood downbeat on commodities?

For one, let’s take Cathie’s well-informed opinions with a grain of salt because (understandably) she is talking her book. There has been a strong negative correlation between commodity prices and technology stocks. Tech stocks have benefitted in the low interest rate environment, while commodities tend to do well when inflation expectations are rising. If commodity stocks do have a ‘serious correction’, then Wood’s tech-heavy ETFs, notably the ARK Innovation ETF will likely do well.

That aside, the idea that commodities are due a pullback from their rip-roaring run over the last year, and especially from their year-to-date gains is logical.

Wood made the following bearish arguments towards commodities in a webinar held Tuesday May 11:

There are two related arguments for why commodity prices can continue to rise:

Ordinarily rising inflation expectations would be met with rising expectations that the Federal Reserve will raise interest rates. Higher interest rates make cash and bonds more attractive and volatile commodities less so. But Jerome Powell has stated on multiple occasions that this will not be the case for at least two years. In which case, the inflation, helped by central bank money printing, just leads to a devalued US dollar. Commodities become worth more of those devalued dollars.

The US dollar index is testing a rising trendline connecting the 2020 lows. A break lower would confirm a new downtrend in the US dollar. 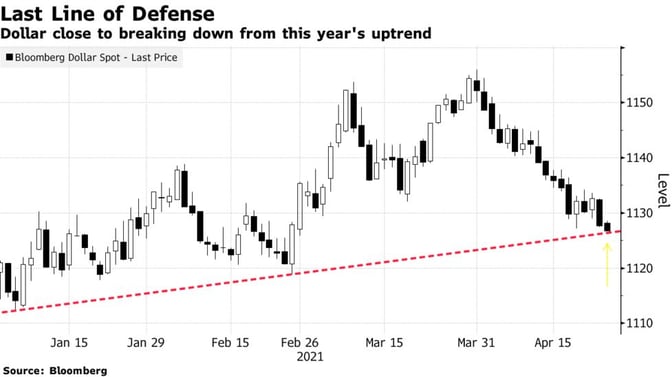 China as the marginal buyer of commodities

China has been on a buying spree, and that has played a big role in rising prices this year. As a command economy, the government and government-controlled entities bought commodities at the lows in 2020 and have been building up reserves this year as relations with the US continue to languish under President Joe Biden, and the threat of more trade barriers linger.

The question is when will China have had ‘enough’? When China buying ends, it could be the difference between the commodity uptrend sustaining or not. Trade data from April offered a possible early warning that import demand from China is already slowing. 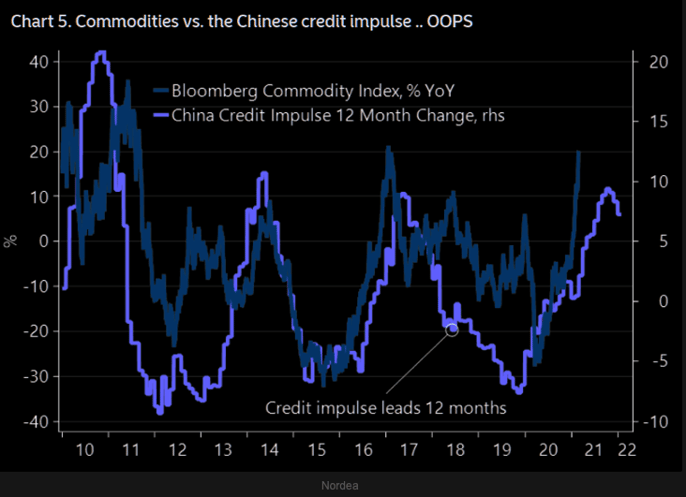 As the world’s largest consumer of commodities, Chinese demand, in turn triggered by China’s own credit cycle, has played an important role in past commodity cycles. Recent data suggests China’s credit cycle may have already turned, which has previously been a leading indicator for the top in commodity prices.

Finally, it’s worth considering that while almost all commodity prices are moving in sync now, that likely won’t remain the case. As noted above, commodities move in cycles and each commodity has its own cycle that are rarely intertwined (except in the so-called super cycle).

Industrial metals have the duel tailwind of supply-chain disruption and new structural demand created by their use in EVs and alternative fuels infrastructurebeing pushed by several major economies.

Short term there appears to be a demand-supply mis-match as economies re-open but the longer term switch from fossil fuels could cut short the super-cycle if there is one.

While demographics can play a long term role, shorter term, it tends to be weather that dominates and will likely do so again when economies are fully open (assuming they do).