Is the Dow Jones better than the S&P500?

Amid weeks of stock-market turmoil, many worried investors have been tracking the daily trajectory of the Dow Jones industrial average like never before. But what are the differences compared to the S&P500 index and which one is likely to perform better?

The S&P500 and the Dow Jones Industrial Average are interchangeable for many investors. But they are different, and those differences matter.

What is the Dow Jones Industrial Average?

The Dow Jones, also known as Dow, is the oldest continuously operating US market index that includes30 significant US corporations. This year marked its 126th anniversary. The index aims to assess the health of the US economy by keeping a close eye on the firms regarded as the engines of the US economy. The following is a summary of how the iconic index and the S&P500 differ: 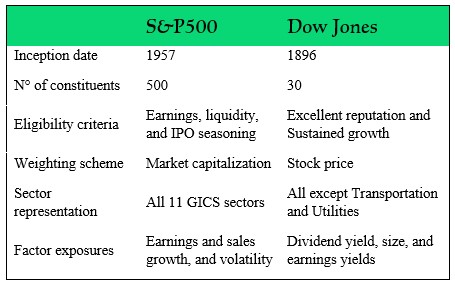 The index is what is called a “price-weighted average,” meaning expensive stocks have a greater impact on the index’s price than lower-priced ones; if a high-priced share goes up 20%, that’s a greater dollar increase than a cheaper share’s 20% jump.

Furthermore, historically speaking, the S&P500 has been significantly more exposed to factors affecting profits and sales growth, liquidity, and volatility. While the Dow, which is made up of big, blue-chip businesses, has a stronger exposure to size and dividend yield. The top 10 firms in both the S&P 500 and the Dow are listed in the table below:

Generally, in the early stages of bull markets, the S&P500, which has a bigger exposure to tech stocks, typically outperforms the Dow. However, because of its value and defensive nature, the Dow seems to withstand storms considerably better when they arise.

The Dow has always tracked well-established large-cap corporations whose prices have a tendency to be less volatile, making it considerably more value-oriented. Over the past decade, the index composed of 30 names has managed to beat the broader market in periods of poor growth, including the early 2000s, the financial crisis of 2008, and this year as investors are worried about the consequences of aggressive tightening by central banks around the world. 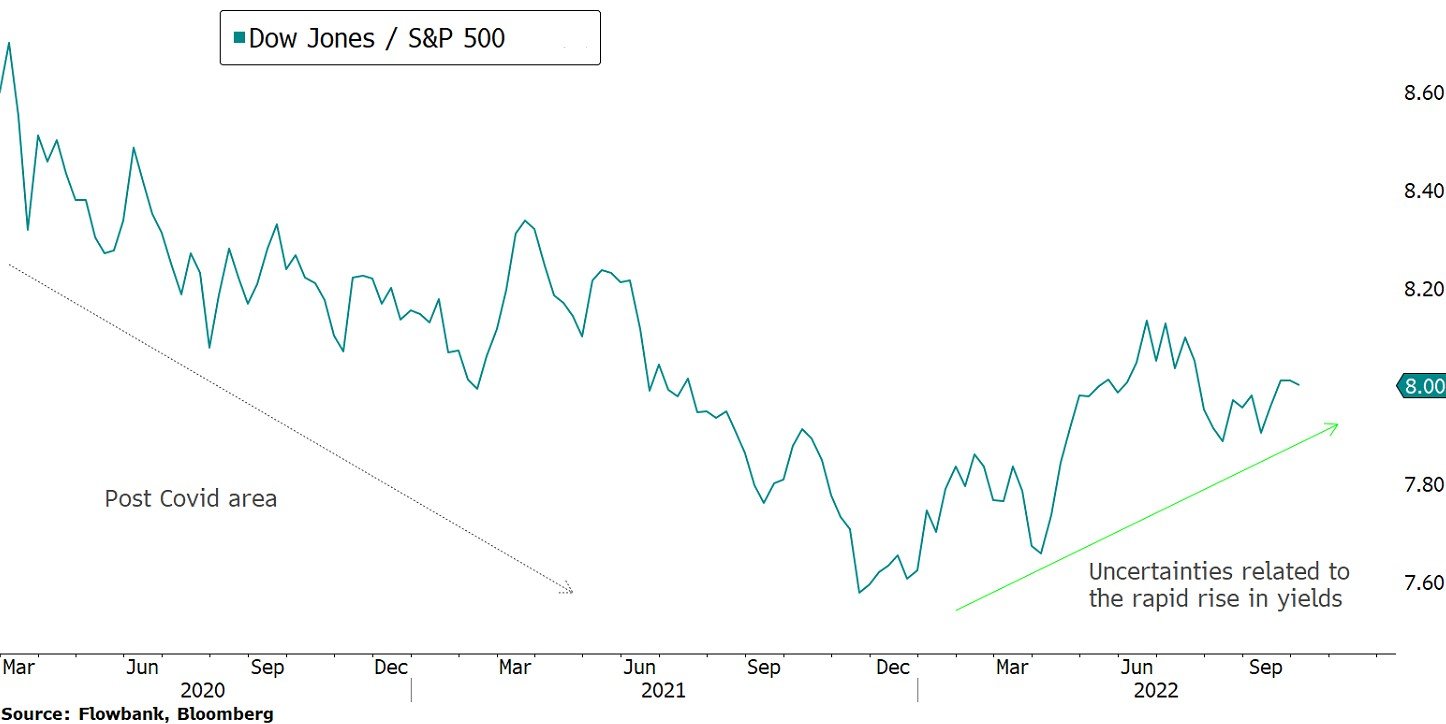 Markets had a strong start to the month, a welcome break from the drawdowns experienced in September and the previous quarter. However, good data (services ISM and jobs), hawkish Fed remarks, news of OPEC+ output cuts, and prospects of negative earnings have allowed bears to seize control once again.

With sentiment already very weak, periodic rebounds are to be expected, but a healthy recovery might need a signal from the Fed that they’re closer to the end of their tightening cycle. Stronger labour and growth numbers are well appreciated by markets but what equity investors need more than anything is a definitive turn in inflation data.

Nonetheless, amidst this uncertain environment, the Dow is likely to perform relatively better than its confrere the S&P500 given its higher exposure to defensive and value stocks.

Another catalyst to keep in mind is this Thursday’s US CPI print. Considering the current extreme bearish positioning and market drawdown, chances for a short squeeze are very high should the inflation reading come in below estimates. The attractive asymmetry of this trade suggests that traders are very likely to start positioning as soon as Wednesday.

The S&P500 and the Dow Jones Industrial Average are both iconic indices with long and proud histories. Their similar long-term risk and return profiles may lead investors to believe they are alike in their construction and characteristics. But under the hood, there is a range of differences, in particular in terms of factor exposures, which make the index more defensive and make it more likely to fare better when storms hit.