Is the Halloween effect real?

There is hardly a year where investors and the media do not refer to the popular market wisdom. It is closely related to the oft-repeated advice to sell in May and go away. This tactic has existed in some form or another for quite some time. Its longer form was something along the lines of Sell in May, go away, come back, St. Leger Day. The timing is also interesting as it includes the “Santa Claus rally”, a 7-trading session during which stock prices have historically risen 76% of the time.

Predictable patterns can be helpful and provide a guide for when to buy and when to sell. Investors seeking a crystal ball to aid with investment decisions could integrate these seasonality effects into their trading strategies.

What Is the Halloween Strategy?

The Halloween strategy, also referred to as the Halloween effect, is a market timing strategy that holds that stocks perform better from October 31 (Halloween) to May 1 than they do from the beginning of May through the end of October. It is based on seasonality and cyclicality in markets.

Some investors find this strategy more rewarding than staying in the equity markets throughout the year. They hold the opinion that as the warmer weather arrives, low volume and an absence of market participants (due to holidays) can result in a riskier, if not altogether lacklustre, period.

The strategy does have evidence worthy of consideration. Historical stock returns indicate that the Halloween strategy's central tenet has been largely correct, at least throughout the last half-century. November through April has provided investors with stronger capital gains.

The graph below displays the average monthly returns for the S&P 500 over the past two decades. Indeed, on average, returns are much higher from November to April than for the other half of the year, with the months of November and April contributing the most to the overall gains. 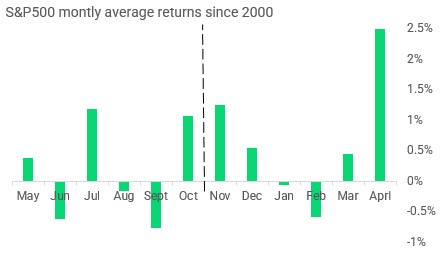 For illustration purposes, the graph below shows the cumulative returns of the average monthly returns for the two periods. And clearly, average total compounded returns over the past 20 years, have significantly been higher from November to April (+4.2%) than the other half (+1.1%). 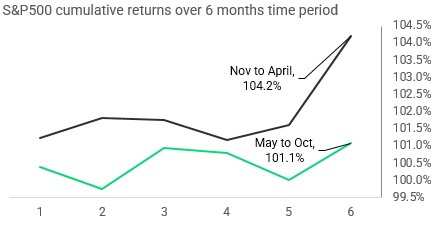 As the current market decline may seem like a decent entry position, some readers are wondering if it is a good idea to buy stocks over the upcoming Halloween season. The good news is that there are a few more promising events occurring that may strengthen risk asset prices in addition to seasonality effects: