Is the impact of the covid resurgence on Indian markets overhyped?

Indian markets are facing headwinds from a pandemic resurgence that has spooked foreign investors, and inflation threats loom. But falling Indian share prices could provide opportunities for those looking through the pandemic.

According to yesterday’s India equity report by Bank of America’s research division, the covid-19 resurgence in India is substantial. Cases have jumped three times the number seen last month affecting over 400,000 people this past weekend. Daily deaths recorded an average of 4,092 while the fatality rate remains at 1.1%. 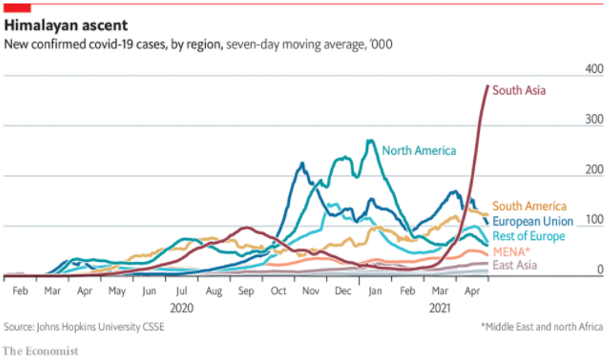 In India, the vaccination situation is somewhat backwards, at least compared to the United States which has over 60% of its citizens vaccinated. In India, only 2.6% of the population received both jabs, while 9.8% received the first.

A national lockdown is likely in order as the virus continues spreading in key states, those states that produce 66% of GDP. Reports suggest that each month of lockdown in India results in GDP losing 100 to 200 basis points i.e., 1-2% of GDP growth folding back.

The Reserve Bank of India (RBI) is set to help finance some of the government’s food provisions plans, and small and medium size business loans. The base case scenario could show a loss in sectors like manufacturing, electricity, gas and water supply, services in construction and trade, hotels, and transportation stocks.

However, banks could come out lucky winners, with increased lending helping SMEs until October of 2021 coming in handy to their bottom-line reporting. Furthermore, before the variant strain became known, India enjoyed a V-shaped recovery that would make even China envious—the IMF expected a growth North of 12%, but Oxford Economics dialed back that outlook to 10.2% on April 26 (still a top grade!).

The covid resurgence in India has noticeably spooked foreign investors, perhaps to the benefit of opportunistic domestic players. The foreign outflow seen in Indian equities comes amid a general 2020 recovery, a momentum far from boring for the emerging markets space. While the BSE index fell below its record breaking 50,000 points line, it remains relatively well positioned versus the same time last year, not to speak of what looks like a busting small caps BSE index.

This poses questions around the panic selling by foreign investors who seem to believe the resurgence could severely hinder returns—but this fear is not backed up by significant evidence aside from some models indicating that the number of deaths could grow further--a claim the Indian government said was far overhyped. 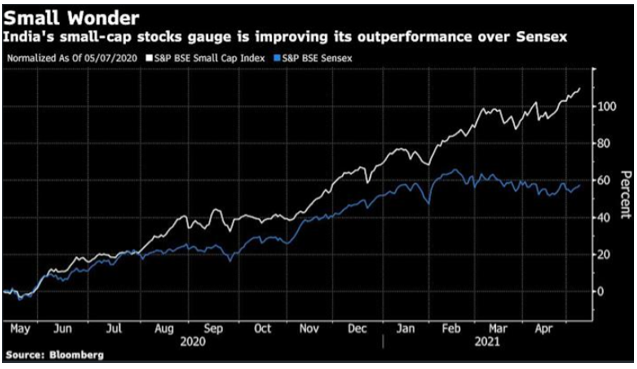 While the Indian IT space has been somewhat correlated with the Sensex index, the recent hurdle that put the Sensex index in a lackluster corner, has not seemed to negatively impact the top four IT players. In fact, the growth seems to have accelerated further perhaps as foreign investors switched over to IT stocks from other sectors, or as domestic investors poured into holes left by fearful foreign sellers. 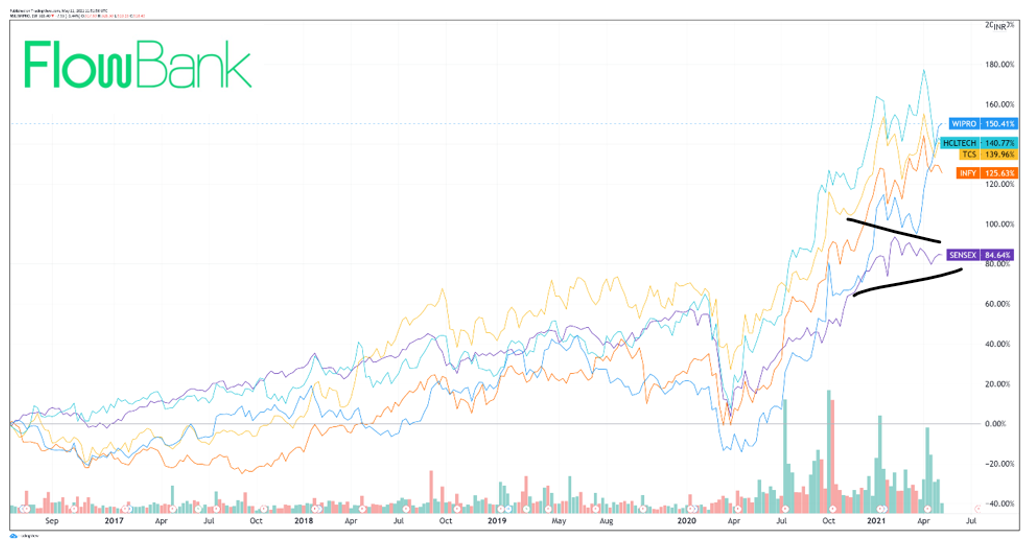 On the domestic side, Indian institutional investors may have just received a great buying opportunity, pouring in an aggregate $1.5 billion in the $2.8 trillion Indian equity market. While some managers point to rising inflation, and an increased level of liquidity in markets as caveats for an impending correction, small caps have continued to outpace the broader market. The following graphics show the substitution effect between foreigners selling and locals buying in.

New regulations and laws around practices for home loans and interest rate subsidies and grants by the government have helped generate some momentum in the home lending sector in India. In addition, the resurgence of the virus and the probable lockdowns ahead have increasingly pushed people to seek out home ownership through mortgage lenders. Therefore, some analysts suggest a 15% to 18% growth in the home lending business in India in the coming years (despite the current market being ‘small’ for housing at $285 billion).

Real estate companies in India, especially those in capital markets who originate loans have reported a 30% increase in profits from same time last year. Nomura said yesterday that with the virus lingering, mortgages could be the most resilient segment in India. The following graphic shows the increasing trend in housing loans in India by volume. Mortgage rates have returned to some of the lowest levels since 2008 (6.7%) and there is an increased housing demand supported by multi year-low house prices. 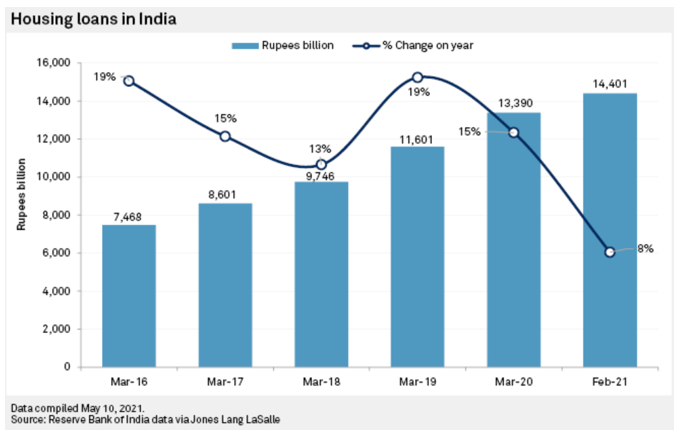 The Indian IPO markets have been in somewhat of a spotlight lately. Indian stock exchanges ranked ninth in the world by number of IPOs year to date where Q1 2021 saw 17 IPOs versus 1 at the same time last year. However, despite the recent performance in proceed size, the general trend seen in the graph produced by EY below indicates that since 2017, the number of IPOs and size of proceeds has generally been decreasing. 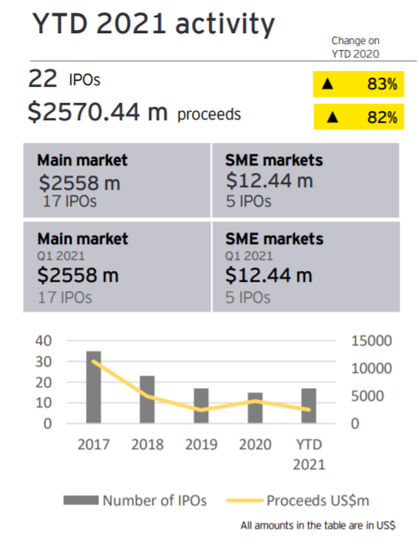 India’s 17 IPOs have mainly been in the consumer products, retail, industrials, and transport sectors and have risen $2.57 billion so far this year, or an 82% change compared with last year. Indian Railway Finance Corp, and Brookfield India Real Estate Trust has raised an aggregate $1.156 billion to themselves, indicating their weighing on the IPO space might be subject to further questioning about the future of IPOs in India.

There are reasons for caution with regards to the Indian IPO market mainly due to the resurgence of the variant strain. However, the pipeline for incoming IPOs sees over 20 companies and more than 30 PE-backed companies are looking for exits in the second half of 2021. The good news in all this for Indian IPOs is the prospect of a potential escape from a terrible 2020 performance, and the hope of a return to previous levels with the SEBI (the Indian SEC) easing minimum requirement norms for start-ups firms trying to raise public funds. This could propel forward some of India’s top unicorns (startups valued over $1 billion), certain of which are showcased in the following graphic: 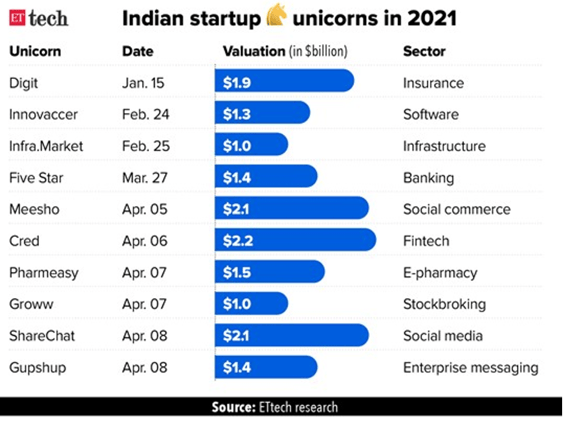 While the situation in India is proving to be unfortunately taxing in terms of death count, and as shocking as the first graph above is, the Indian outlook, remains robust. The Indian IPO market is picking up steam versus last year, the housing market is become democratized, the IT space remains in vogue, and while foreign investors leave Indian equities, local investors are happy to buy their shares especially as bank stocks and small caps continue to prove their worth throughout difficult times.