Is the time right to invest in U.S. bank stocks?

Revenues fell slightly while profits rose. Trading revenues were surprisingly lower, loan growth too, but fees on M&A and underwriting soared. Q2 was a mixed bag for banks, but the future relies on a recovery. Here is what you should know before investing in bank stocks.

How do banks make money?

U.S. banks have two revenue streams broadly speaking; investment banking, and commercial banking. If M&A and IPO underwriting activity is on the up, this is good for the investment banking side who charge fees in the process. If loan demand rises in the US, this is good for the commercial side who charges interest rates, and fees on applications, ATMs, accounts, maintenance and penalties. Banks also increase their margins by scrapping bank branches and integrating new technologies (this is where FinTech figures for large banks).

Banks are also usually cyclical businesses, meaning they move up and down with the economy’s business cycles. When people have extra money to spend, they take out loans to buy houses, and cars, assets that banks underwrite at an interest rate, and a consortium of fees. In a period of recovery, banks can be set to gain, assuming a favorable macroeconomic environment, especially one where rates remain low. Low interest rates matter as it means more spending money in people’s pockets, and thus more loan revenue for banks.

The conclusion we explore in more detail below is that in this environment, there is no verdict, in our eyes, that looming threats are around the corner for bank stocks. Yes, there is uncertainty around macroeconomics, yes the recovery is slower than expected, but spending money is there, rates are still low, and vaccines are rolling out. The crypto market space is at a summer stall, and IPOs are surging still. Many good things for banks for H2.

Is there a good case for U.S. bank stocks?

A general economic recovery has accelerated since vaccines started rolling out. In China, exports have risen more than previously expected. In England, and the U.S., there is a boom in home prices which is good for mortgage lending divisions, and IPO activity is still seeing momentum. Small business optimism is at an 8-month high, and loan growth is at a low and set for an already blossoming rebound (see next graph).

Loan growth is at an inflection point, and nearing a turnaround. This reversal stems from banks being flush with cash. During covid-19’s peak, companies started turning away from banks and tapping the bond market to raise funds. Bank credit lines were closing in front of their eyes because banks were afraid of a deep recession and not being solvent. But now banks are now flush with cash from all those repaid credit card debts, and heavy savings which means more loans ahead would translate to more earnings for banks. 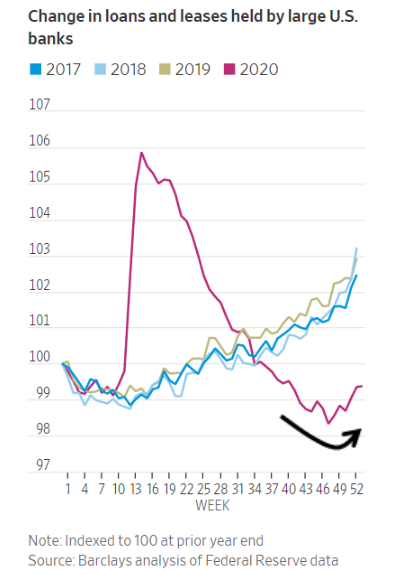 Net income tailwinds ahead? Net income, the spread between what banks charge borrowers and pay depositors fell 5% across the sector last year. This was a consequence of shrinking loan portfolios and low interest rates in what was the biggest drop seen in 80 years, says Well Fargo. Now, banks have plenty of money to lend, and would like to do so, but it is not clear when this will happen. Banks have signaled the economic recovery has held up better than expected and that focusing on well-off customers is a better long-term strategy than focusing on worse off customers.

Lastly, the IPO space has had a solid start to the year, and amid the SPAC craze, large underwriters have been net beneficiaries of an IPO bonanza. The IPO space continues to see momentum, but tightening rules around SPACs could see the rest of the year slow down and with it, revenues for banks. However, IPO pipelines have been described by big banks, to be backlogged meaning more is yet to come. 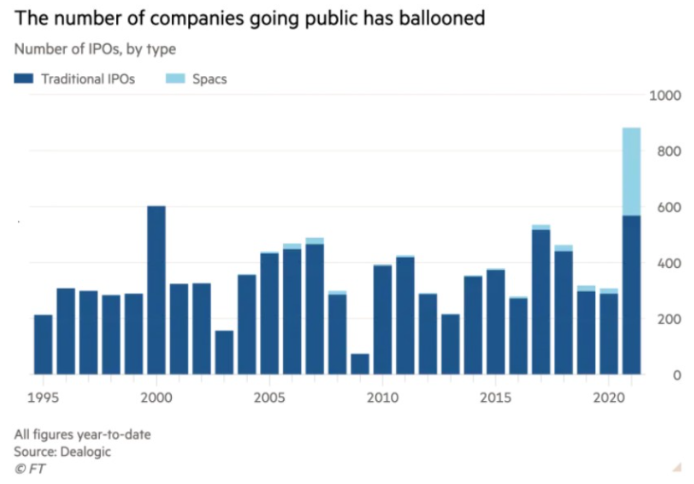 The bad and the ugly for US bank stock.

While we try and make the point for a recovering American economy, we remain realistic in saying there is no clear path drawn out yet. Banks are heavily correlated with macroeconomic conditions and with a virus variant strain on the horizon handicapping a reflation trade scenario, and a hawkish federal bank threatening to raise rates (to cool down a hot economy) who knows, really.

US futures fell today after consumer price index data revealed the inflation rate jumped to 5.4% in June, well above the 5% expectation. The federal bank continues to put forward the message that a surge in inflation is transitory (meaning it will soon fall), but an annual inflation rate hitting a fresh high since 2008 stings and worries some investors (see 10-year yields falling). Used cars, gasoline, fuel oil, services, housing, and transportation are all seeing their prices rising right now, on the one hand because of a growing demand, but on the other hand because of supply chain derived shortages.

Rising home prices and a low rates environment is nice for banks to increase their mortgage lending operations, but this might not be where the money is made in H2. Of the originations they were able to produce, banks packaged them in mortgage-backed securities, and sold them off to investors, meaning they didn’t benefit from the coupons on those loans. Furthermore, many nonbank lenders took advantage of the past year to disproportionately pick up market share as banks tightened lending. And lastly, credit card debt was paid down by cash flush consumers. Good from a risk standpoint, but bad from a repayment rate standpoint, a technical metric in debt finance.

The grey zones in alternatives: trading and fintech pressure

Retail trading was a boom for players like Robinhood putting pressure on zero fee brokers like Bank of America’s Merrill Lynch and others, but, the reality is that the five biggest investment banks saw much success especially last quarter in fixed income, currencies and commodities. Goldman Sachs believes normalized trading volumes could soar higher than pre pandemic levels, to a new higher normal. 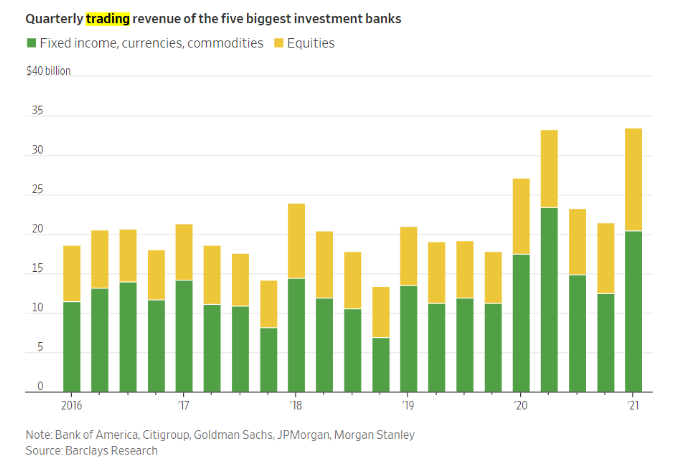 Another grey zone is the financial services industry including the FinTech space and perhaps also the crypto markets which could pose a threat to a long term take on investing in bank stocks. Visa, Paypal, Marqeta, Affirm, Square, SoFi are all on the marketplace now, and exhibit exciting figures that could pull cash away from traditional bank stocks as the world begins to further embrace neobanks and digital financial services.

However, big banks have never been blind to fintech and have in fact been net beneficiaries themselves. They all have venture capital arms looking to buy up some of the most attractive startups in fintech and regularly have tested out new technologies, like blockchain for Know Your Customer and onboarding, before blockchain become popular from Crypto in 2018 and 2020/2021.

While the point could be made that FinTechs pose a threat to bank stocks, five reasons come to mind in how FinTech partnerships could actually benefit banks. Fintechs can help banks tap into new markets via partnerships and back door white label solutions, they can help them improve customer retention and user experiences in the digital space, they can also help banks diversify their loan portfolio diversification, they can leverage specialized technological platforms for liquidity optimizations and they can use fintech big data companies to enrich their underwriting and cloud quality.

Conclusions on earnings and macroeconomics

As earnings roll out we see revenues have fallen slightly, despite profits more than doubling in some cases. Profits rose from a general release in stockpile of cash, cash saved up to protect against loan default and from fees made on the IPO front. The release was a good mood to minimize risk, something worth mentioning since a banks are highly leveraged businesses and an investor should care about how risky its activities are.

On the darker side, low loan demand has challenged banks, banks that are now sitting on cash and ready to lend, and as trading has fallen despite a record year in retail trading seen at Robinhood, questions arise about the future. Net interest incomes were generally down as banks are sensitive to interest rates, and expenses were also somewhat up. Banks have benefited from the reopening of small and medium sized businesses, record-high stock prices and consumer’s willingness to spend after a year of buckling down spending.

2020 was a terrible year for bank stocks but the winds have turned. Between the collapse of the consumer economy and interest rates plummeting to all-time lows, the risks were higher and profits were lower. However now, the economic recovery is already proving its marks between Q1 and Q2, showing banks that trade for price-to-tangible book value multiples that are 20% or more below pre-covid levels. And of course, the housing boom we are seeing now, mainly led by a new home shortage and driven by a growing millennial purchasing class, could mean more to come for banks.