In the FX space, the main story of 2022 has been the record sell-off in JPY down to 20-year lows versus the US dollar. Has the yen reached bargain levels or would buying now be catching a falling knife?.

The yen has come under heavy selling pressure against a broad range of major trading counterparts. To put this in perspective, we’ve seen an almost 16% rally in USDJPY, with EURJPY and GBPJPY rallying by 13% and 14% respectively.

However, we’ve seen some corrective action over the last week with JPY finding better demand, causing some near-term reversals in these moves.

A major breakout on the long-term chart of USD/JPY took place around the 124 level. The technical bias is bullish while above this level. 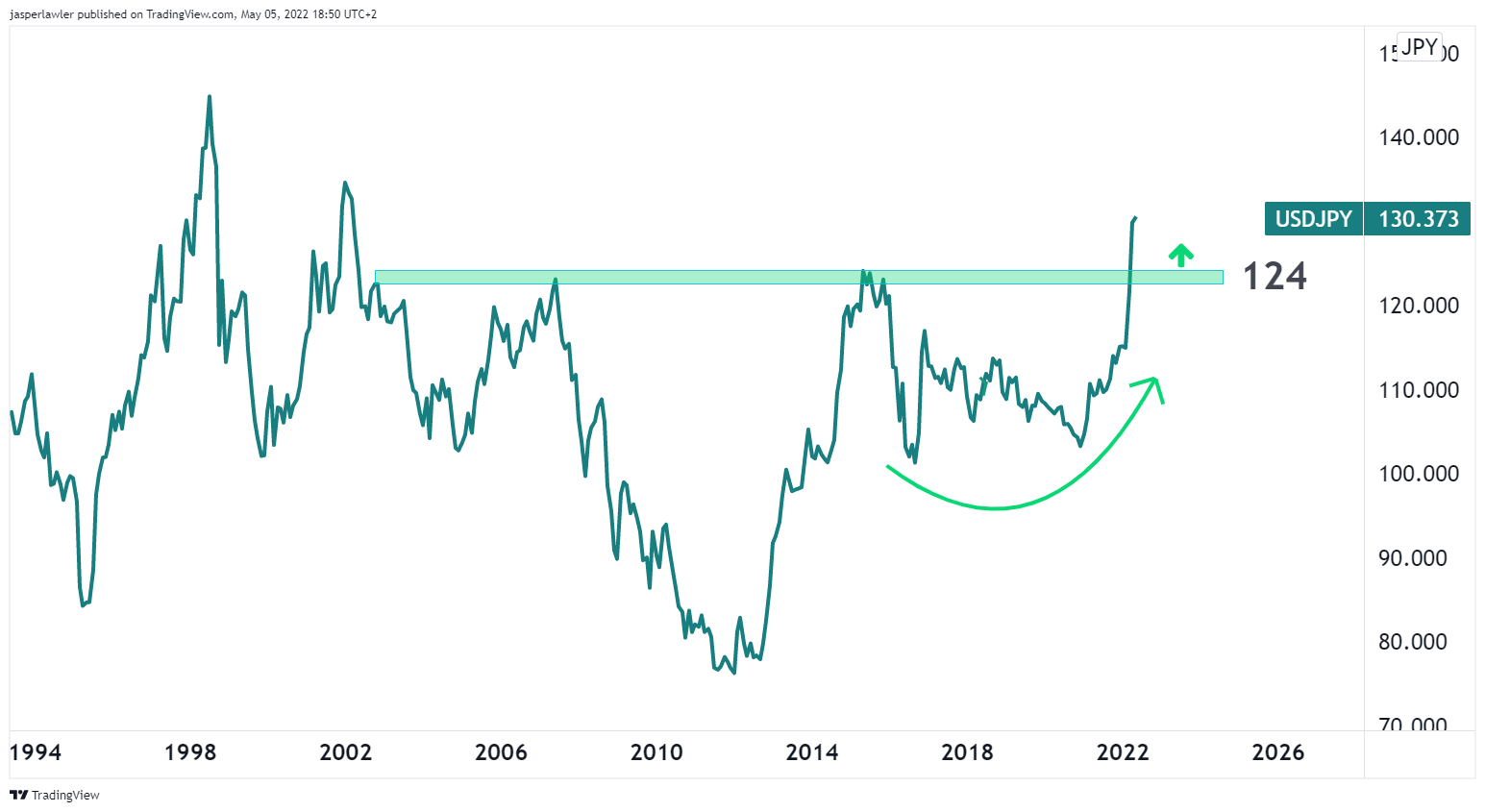 With this in mind, traders are now wondering whether this JPY selling is merely a correction, or if it marks the start of a broader reversal in JPY sentiment?

To answer this question, let’s take a look at what’s caused the weakness in JPY this year and whether these factors look likely to change near term.

Key factors Weighing on JPY In 2022

Monetary policy divergence between the BOJ and other G10 central banks

The biggest issue which has acted as a downside catalyst for JPY this year has been the ballooning monetary policy divergence between the BOJ and other G10 central banks. With inflation soaring globally, many banks such as the Fed, the BOE, BOC, RBA and RBNZ, have embarked on a path of policy normalization.

With the global economy transitioning out of the pandemic over the last six months, central banks have been fighting to unwind the massive stimulus put in place across the height of the pandemic. However, the BOJ, in contrast to this, has reaffirmed its commitment to maintaining an easing presence in the market.

With other central banks turning increasingly hawkish, the divergence in policy approaches has become even more magnified recently. The Fed’s own outlook, forecasts and rates guidance have been upgraded significantly in recent months with the Fed hiking rates by .5% this week, alongside guidance of similar size hikes to follow in June and July.

At the latest BOJ meeting, however, the bank took a staunchly different view. Despite warning that inflation will remain elevated, the BOJ reaffirmed its commitment to continuing with daily bond purchases in a bid to keep bond yields around .25%. Additionally, the BOJ said that further stimulus can be added if needed, pushing back against tightening calls which it believes the domestic economy is too fragile to cope with.  Simply put, while rates around the world have been rising and look set to rise further, Japan is holding rates at current low levels and wants to do so for as long possible, causing major capital outflows.

Away from the monetary policy backdrop, the Japanese Yen has also come under heavy selling pressure as a result of the shift in risk appetite. The initial market reaction to news of the Russian invasion of Ukraine saw risk assets under heavy selling pressure with JPY spiking on a surge in safe-haven inflows. However, this initial dynamic reversed fairly sharply and risk assets have since rebounded. The Nikkei is currently trading around 10% higher against those post-invasion lows which has sapped safe haven support for JPY.

JPY to Continue Lower for Now

Looking ahead, the likely path for JPY at this stage appears to be further downside. With G10 central banks continuing to tighten (RBA, Fed and BOE have each tightened this week), there is little to suggest JPY will meaningfully reverse near-term.  The current price action we are seeing across the board in JPY appears to be mid-trend consolidation, suggesting an eventual break higher for JPY crosses and a continuation of the recent bullishness we’ve seen.

However, it is prudent as always to monitor the risks to any base case scenario. With regard to JPY specifically, the risks to further weakness are linked to any change in the current central bank narrative. Already we are hearing central banks warning over the impact that current and future tightening is expected to have on domestic economies. With inflation likely to continue higher near term, this combination of higher rates and higher inflation poses major risks to the global economy. If recessionary fears begin to take greater prominence, this could easily translate into a wave of risk off action, driving haven inflows for JPY.

The Japanese yen is now the most undervalued among major currencies according to the BEER model. That doesn't mean it can't get even more undervalued but at some point, this value will attract enough interest to bring in a bottom.

Given that short JPY positioning is extended here, any such event would likely fuel a sharp short squeeze in JPY, similar to the moves we saw around the end of April.