Klarna beating competition in the BNPL space: IPO ahead?

Spotify and Oatly are great, but the Swedes also have Klarna a service for shopping, paying, and banking, all in one place. Klarna is Europe’s most anticipated IPO right now, but why are they worth $20B more than Deutsche Bank?

Buy now pay later (BNPL) companies continues to see elevated daily app downloads and even faster trends in monthly active users which indicates to many investors that this fintech segment might just continue growing at a double digit CAGR in the coming years.

App downloads slowed in May, but was up 98% year over year to 1.86M in the United States. Klarna stood out above the competition as the most frequently used BNPL provider with 2.3M monthly active users in May, or 41% of all BNPL users.

Figure of the US total app downloads in the BNPL space 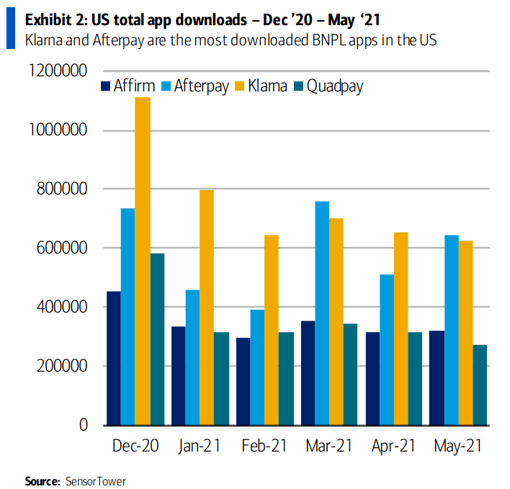 The BNPL industry could rack up $680B in transaction volume worldwide in 2025 building on the back of a sustained retail ecommerce space, at an estimated CAGR equal to 13.23%. BNPL solutions are natively integrated into e-store checkouts and as e-shopper needs continue to grow, so will the need for BNPL, and new fintech solutions to spending and budgeting.

Klarna is a 16-year-old Sweden-based buy now pay later business that seems to never stop its northern climb. One month ago, the news came out that the upstart bank raised $1B in new funding at a post money valuation of $31B (see graph below). It secured its position as the number one fintech startup in Europe, but this must be old news to you by now. 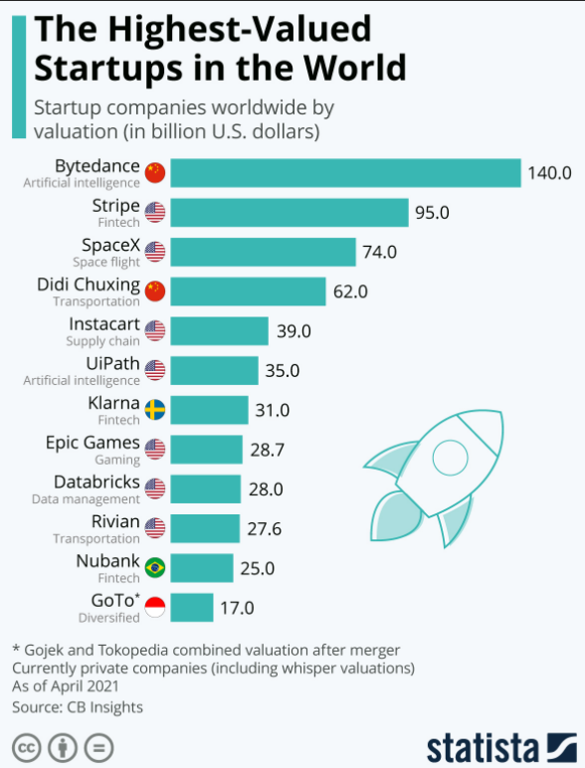 Two weeks ago, Klarna reported a quarterly transaction value that almost doubled in Q1. The value of transactions made using its payment platform rose to $18.9B from what now seems a meager $9.9B a year prior. U.S. consumers using Sweden-based Klarna, more than doubled to 17 million in April, with app downloads in the US surging 125%.

Last week, Klarna raised another round, this time seeing $639M poured in by none other than SoftBank’s Vision Fund, and other top VC groups. Forget $31B, hello $45.6B valuation. No doubt, this valuation makes sense. After all, Klarna is live in 20 of the largest markets in the world, has over 90 million global active users, and more than 2 million transactions a day occur on the platform.

Interestingly, for the first 14 years of its existence, Klarna was profitable, self-sustaining, above the water, but pivoted south in 2019 when the firm saw negative net income—but this was by design. In a strange way, Klarna only just became a typical ‘’growth startup’’ during the pandemic. Covid-19 was the best possible advertisement Klarna could have received, and with the added popularity came unexpected growth-tied costs. Will it make it through?

How will Klarna deploy the funds?

Net income negative is a good enough reason to raise cash—Klarna needs cash to finance its operations because it is basically a lending business. Secondly, Klarna’s growth saw some very large general administrative expenses, which is a good sign of growth as the firm hires an increasing number of people, but rough on the financial statements.

Klarna has seen massive operational expenses because of its consumer base doubling. More consumers is a great thing for the long run, but the reason Klarna is in the red is partly done by design—it had to pay a lot of merchants as users made use of Klarna, which implies Klarna had to use more of its equity than it was prepared to use, thus the new round.

Lastly, Klarna has been rumored to file for a direct listing, which would justify the last round so quickly after a massive March raise. After all, both its main rivals Affirm and Afterpay already rang the bell, and while the results are mixed (especially for Affirm after Peloton shenanigans) Klarna is almost in a class of its own—it knows how to get back in the green, faces some headwinds from competition, but strong tailwinds from a business development and growth standpoint—their international expansion only just began in March 2021...

How does Klarna make money anyway?

Klarna grew to become more than just a BNPL business. The firm is now partnered with over 250,000 retailers around the globe and enables consumers to optimize the way they pay for items—now or later, which ever is more convenient. Of course, the way all this works is for Klarna to pay merchants the moment a consumer buys an item. This means Klarna first subsidizes purchases by spending its own money.

Here's a look inside the app: 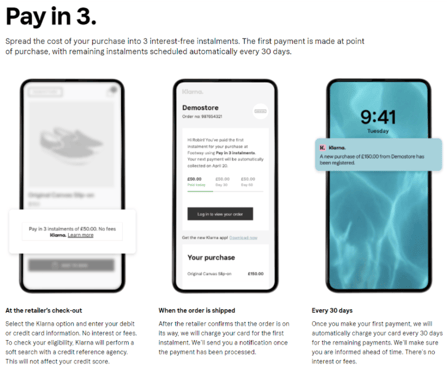 Competing as a checkout option and as a payment processor is the best way for Klarna to optimize user payment preferences and spending habits (and profit). If you were to look at its financias, you would notice that net interest income comprises less than 30% of all revenues. This means there is a product line financing purchases for a longer time frame (6-36 months) at a double digit interest rate, however most of the money is coming from fees merchants pay i.e. about 3% of the good's value.

But why are merchants buying into this scheme? Customers are more likely to buy on credit. They convert at a higher degree, and increase their store's purchase figures. It is free growth with the credit risk taken on by Klarna who charges a premium for taking it (the fee). This is the core reason why Klarna's market cap is $20B more than Deutsche Bank's--this sort of BNPL model is terrible for banks who don't offer checkout solutions.

The reason why a buy now pay later schematic works well is because online stores are in no position to say no to customers, and because consumers don’t want to pay credit card interest, or borrow money from a bank. This enables Klarna to steal away a lot of business from traditional banking institutions.

Online stores will take any customer they can get, even if it means paying a ‘’sourcer’’ like Klarna a fee. In sense, Klarna is like a broker, adding liquidity in the consumer retail space, and acting as a sort of reverse lender to merchants.

The BNPL business model can further be split into two distinctive categories. First, we have point-of-sale lenders like Affirm and PayPal Credit that usually function best with large purchases like Pelotons, or Casper mattresses, are repaid over longer periods, need credit score checks (in the US), and charge buyers interest. Secondly, pay-in-four services, like Klarna and Afterpay, charge very little interest if at all, require a 25% cash down, and operate without any credit checks.

Klarna’s BNPL practice is interesting in that it looks a lot like a lending servicing practice dubbed ‘’spending tool management’’. In truth, it does not have to abide by any Australian or European consumer lending laws because in form, it does exactly look like a traditional online lender.

Those governments have since changed their approach however—especially as such BNPL firms become more broadly used—while US regulators have been slow to react, Australia and Europe have since taken steps to regulate such providers (i.e. you’re not allowed to endanger consumers with certain types of rhetoric or marketing to boost spending via BNPL).

In Klarna’s case, in January, the firm welcomed UK consumer regulations proposals around unsecured lending practices (unsecured means you don’t put up collateral like a house, to use Klarna’s BNPL service, but because Klarna acts like a pseudo-debt provider, it should abide by consumer protection laws for good form).

Ultimately, Klarna is subsidizing the consumption preference of its users without offsetting this primarily from net interest income.Instead, they try make money as payment processor by competing as a checkout option with other with payment firms.

Klarna is a BNPL business valued at $45.6B, Europe highest-valued startup. It has benefited from the pandemic-led lockdowns, is eyeing an IPO and currently incurs losses on income. The company has seen a recent surge in growth, as more online buyers have turned to its spending tool product offering, a tool enabling installment payments over bulk upfront transactions.

The product is extremely convenient for users to sign up to, Klarna has a banking division where loyal customers may deposit funds and access loyalty program benefits, and Klarna enables direct payment solutions as well. It therefore competes on multiple fintech fronts, and is positioned as the pack leader in the BNPL space.

Figure showing BNPL players (ex. Klarna who is not public) 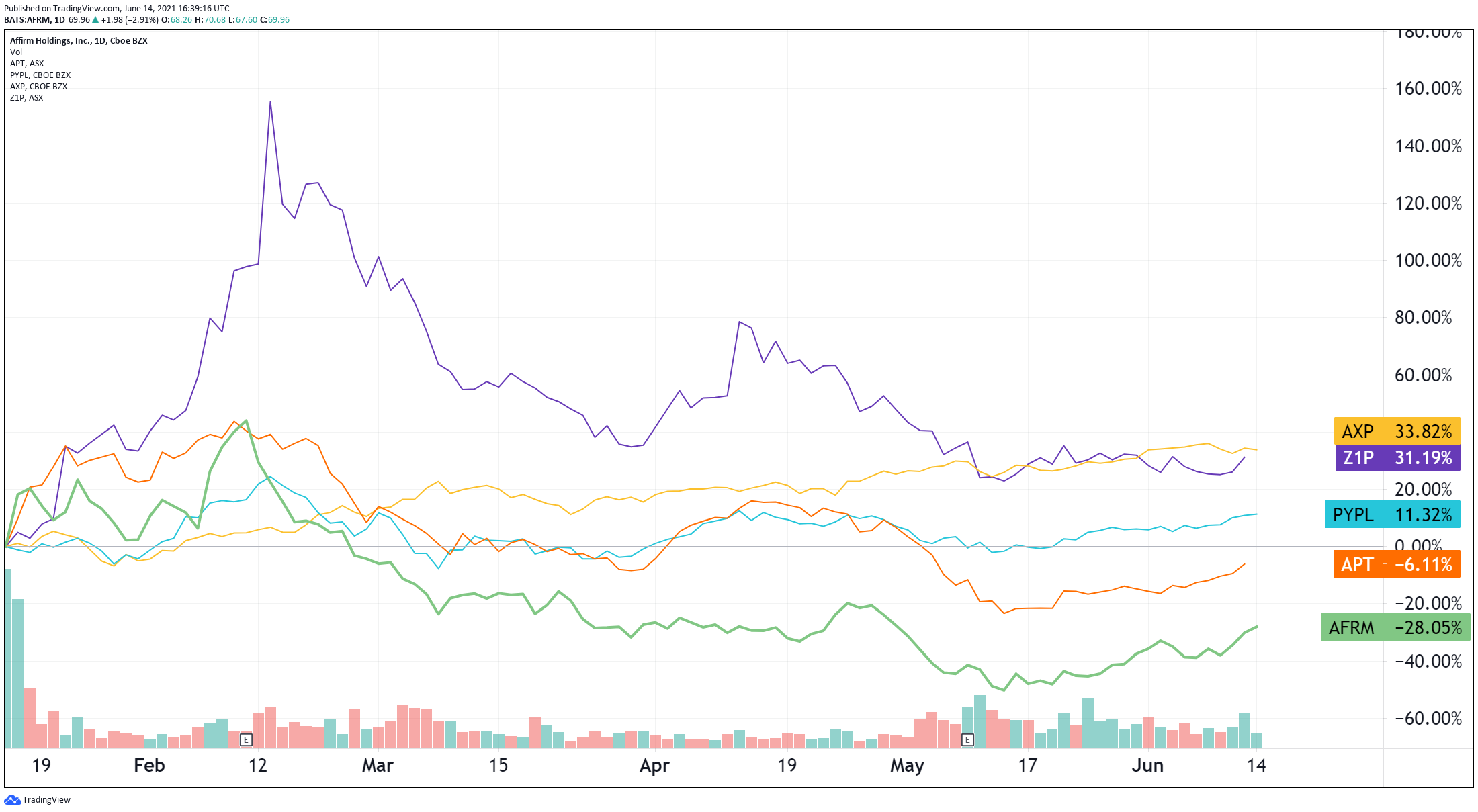