With 2020 being the year of Covid-19, what will 2021 stand for? Our short rendering of macro-economic prospects will help you build your big picture intuition going into the coming year.

Looking back on the lockdowns:

A slow down in the control of the coronavirus spread is an economic issue in that not reducing it prevents mobility, and thus economic flux. Voluntary social distancing is especially high in advanced economies where the privilege to work from home has not gone against people's productivity needs, but this is not the case for all sectors, or demographic groups. The lockdown effects having had unequal results, women have been hit hard from their role in childrearing combined with a lack of mobility, and young worker cohorts, relying on contract based labor incomes have been hurt too. These are two segments that truly benefit from government allowances, more to come below.

Studies show that lockdowns reduce the spread of a virus more than other measures, and that our conceptualized view of a trade off between economic prosperity vs. health safety need not be so drastic: the short term losses from proper lockdowns result in greater medium-term gains. A caveat for this report is that not enough data is available yet to determine the lockdowns' true effects on mental health and educational attainment which could have long lasting effects on our economies and populations.

As shown in the table below, world output was naturally down in 2020. The third quarter of 2020 however, showed a lot of improvement, and signals the beginning of a recovery. A gradual increase is expected quarter by quarter through 2021. Unfortunately, social distancing is not set to disappear as data shows its positive effects on containing the virus. Next year, a real GDP growth of 5.2% is likely from a global and Euro standpoint. Advanced economies have contracted on average this year, but are set to leave the red behind in 2021.

Because Chinese activity normalized faster than elsewhere in 2020, China is set for some of the largest gains pushing the 10% bar in aggregate between 2020-2021. While Emerging Markets have shown, through their indices, a bright future, prospects of recovery might underwhelm for the following reasons; a hard hit on tourism, a reliance on remittances, and a stressed health care system. Oil reliant countries could also underwhelm due to pressure on prices, and civil strife. What matters most for a country is that their growth rate in 2021 at least matches the growth rate in 2020, or even better, that it surpasses previous levels. This is not going to be the case for most advanced nations, not to mention developing nations.

See this table from the IMF to spot the spreads between 2020 and 2021 levels:

Looking past recovery in the next five years, the medium term outlook, developing economies will only modestly push towards the current projections which could mean an incoming setback in living standards. Projections for developing nations is said to show a relative decrease in growth pace especially due to a changing demographic landscape, an ageing population, and a slow population growth (think inversed age pyramids).

Emerging nations growth is set to decline in the medium term for the following reasons: structural slowdown of China, subdued path for commodities, lowered cross border travel, and a diminishing demand from outside due to developing nation growth dynamics.

Projected increases in sovereign debt (always more, more, more) and a decreased economic output will mean a smaller tax base to service debt obligations in the future. This is a reason for political inflation tolerance as inflation devalues debt over time. Sovereign debt as a portion of GDP in developing nations will rise by 20% through the end of 2021, twice as much as the projections for emerging markets. In order for governments to pay back these increasing obligations, they will need to tax their base (a base that is shrinking) which will leave less money in the end to finance other necessary social projects. This is a dilemma because after a crisis, people will need more help than before, thus putting pressure on governments to alleviate inequality while also paying their dues.

Unfortunately, efforts made towards improving poverty around the world will go down. Folks who relied on mobility and daily wage labor have been crushed by lockdown measures. The consequences show that 90 million people could fall below a $1.90 a day income (considered as the extreme poverty threshold).

In addition to the groups mentioned earlier, workers in the food, transportation, retail and wholesale sectors are strongly affected by virus control measures. Trends also show that workers in low wage jobs are more likely to get the axe compared to their high wage earner counterparts.

The effects of structural changes from Covid-19 related restrictions are set to scar potential output going forward. Effects include adjustment costs and productivity impacts as firms upgrade workplace safety, file for bankruptcies, and workers become discouraged and exit the workforce. Developing nations will be hindered more from diminished investments, exiting human capital, slowed tourism, and softer demand and from abroad.

Unemployment is not expected to decrease but rather stabilize at a lower level in 2021 as shown in the graph on the right below. There will be growth, but it is set to be quite modest with wage support structures set to fade away in many countries soon. Some workers might decide to retire early, some discouraged workers could be set to exit entirely.

Overall, the pandemic has contributed to what is projected to be a continued slow down in employment (at least a level that is not going to surpass 2019 levels) and according to the Phillips Curve (a theoretical economic model), higher unemployment is a cure against inflation, and thus matches the next segment showing the low inflation prospects going into 2021.

Prospects in inflation, CPI, and scenario risks for emergence:

Inflation is set to remain low on many accounts, but not without risks and pressures. Pent up demand could put pressure on prices of goods and services going into the next quarters. Prices could also be bolstered by high production costs from persistent supply disruptions. Prices in cyclically sensitive sectors are posed to stay muted because of a low expectation in aggregate demand. Overall, it is unlikely for inflation to pick up speed very rapidly after the recession however some movement upwards is expected, see OECD graphic on CPI inflation projections below:

The downside risks include consumer confidence declining due to potentially receding vaccine solutions, reduced household spending and increasing savings, and weak demand from continued small business closures. The upside scenario is the following: world GDP raises to expected levels, output comes back to pre-pandemic levels, world trade growth comes back, savings rates go down and spending upwards, household income go up accompanied with business investment increases. The most likely outcome is a combination of both.

Small business insolvency going into the next year

With past lockdowns, it is no doubt that bars and restaurants were one of the worst hit groups. Solvency refers to a business' ability to pay it's long term obligations, and liquidity refers to short term debt. Small and medium size enterprises in general will miss both marks this time around. SME jobs and debt is at risk for 2021, and will need government support. Though PPP in the US was already implemented as well as loans in Europe, more will be needed. Below is the distribution of sectors most at risk of missing their short term obligations with food and entertainment hit the hardest: 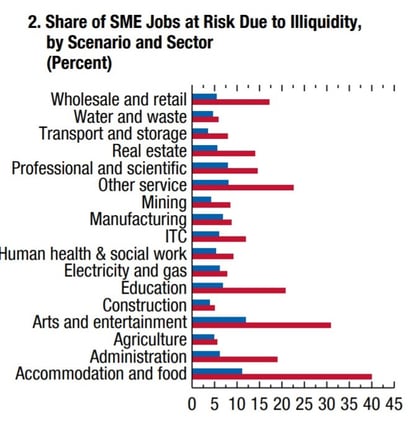 Brent crude oil is posed to remain constant at USD 40-50 through the projected period, and non-oil commodity prices are assumed to be constant as well. China's recovery will boost commodity demand which will benefit raw material exporting economies (usually in developing nations), and this is especially true of metals such as iron ore. Iron ore converted to steel will be in much demand as infrastructure projects around the world could be used to prop economies back up.

With commodities becoming more firm, advanced economies' exports have pushed their currencies upwards. They will continue to see this trend in 2021 with the Chinese renminbi as an example. Some risks include slowing demand from abroad, and cross border issues in supply chains not fully recovering. 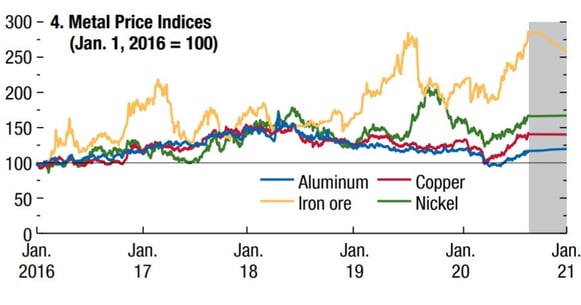 Trade is set to make a comeback with trends already showing a positive increase since a low April 2020 performance. The trend prior to Covid-19 was already a decrease in air freight, container port traffic and merchandised trading in part due to Trump tariff policies. Travel which includes business travel remains far below zero and makes up for a very slow recovery. It is not projected to increase much more during the next year. However, we saw a record number of flyers during the holidays as people's expectations of the vaccine reduced fear. 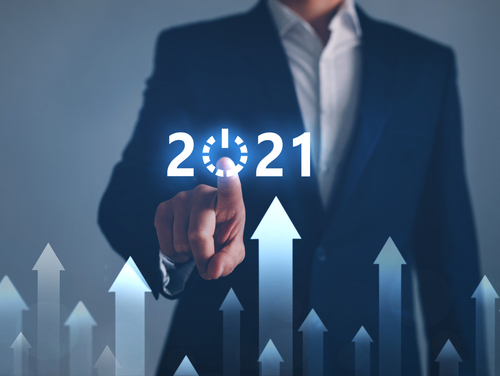 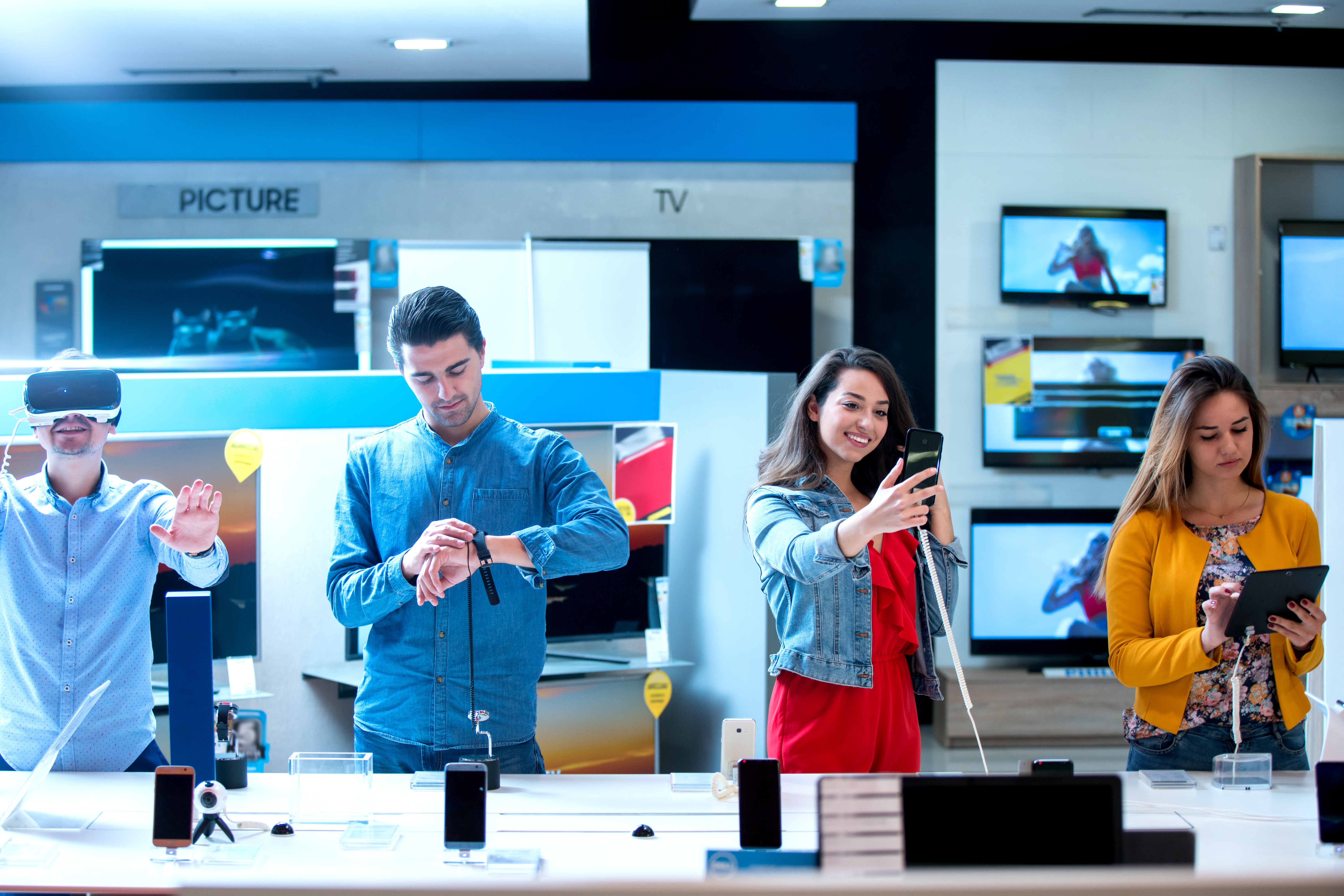 Top 5 investing trends that came out of CES 2021