Microsoft: The king at a discount

Risk assets are seeing a decline in valuations as macro pressures have led the Federal Reserve to pursue a very aggressive tightening monetary policy. Historically, environments of fear and panic selling have usually led to asset mispricing, offering an opportunity to long-term investors to buy good quality and growing companies at lower valuations. One strong brand that deserves our attention is Microsoft Corporation (MSFT).

Microsoft is a technology company that develops and supports software, hardware, and other services such as cloud infrastructure and cybersecurity that boost efficiency, productivity, and competitiveness. Microsoft was able to create a staggering USD198 billion in revenue for the fiscal year 2022 (which ended on June 30th). Three segments make up the total revenue: 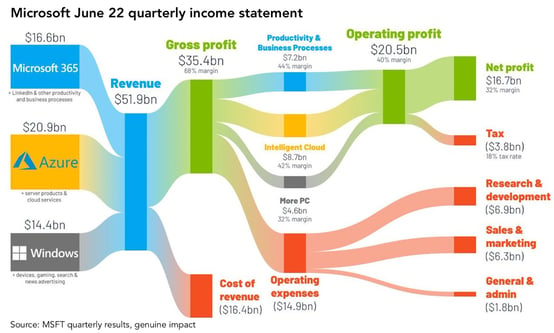 Azure is arguably the most well-known and significant service in this category. Customers use Azure for a variety of uses including cloud computing, storage, cloud security, artificial intelligence, the internet of things, and machine learning. Its flexibility, scalability, and ability to operate more quickly than on-premise servers make it a must. In the Q4 FY22 report, Intelligent Cloud reported revenue growth of 20% while Azure sales increased by 40%, making Azure the segment's primary source of growth and revenue. Although Azure's growth pace is slowing down, it is so far still able to maintain a 40% to 50% growth rate, outgrowing its main competitors AWS (33% growth) and Google Cloud (36%) during the same period.

This market includes a very diverse range of information, communication, and productivity services. The Office Commercial and Office Consumer sectors are probably the most well-known, also known under the name Word, Excel, PowerPoint, Teams, Outlook, OneDrive, and SharePoint. For each of these services, Microsoft benefits from the continued shift from on-premise licenses to subscriptions.

This sector also includes LinkedIn, the well-known social media site that is mostly utilized by businesses and professionals. At this time, there are more than 850 million active users. In 16 of the previous 19 quarters, LinkedIn's revenue in this sector increased by over 20%.

Three categories are used to group the goods and services in this segment. The first group is referred to as "Windows" and includes the operating system that many of your PCs use. Second, “Devices” consist of all Surface devices and PC accessories. Third, is the gaming unit (gaming content and consoles), which is about to become an important category, especially with the recent acquisition of Activision Blizzard. The deal still needs to overcome regulatory approvals.

From the top-down, the public cloud market had a successful first half of 2022, registering more than 35% growth. The combined annualized run rate of the top 3 cloud providers—Azure (Microsoft), AWS (Amazon), and GCP (Google)—now stands at USD147 billion. Unlike some pockets of the tech sector that were one-time beneficiaries of the pandemic, there's no question that cloud migration will continue to be a structural theme.

Azure is estimated to have the highest operating margin at over 43%, while AWS had a 29% margin in Q2. Google Cloud Platform, the distant third vendor with less than 10% of the market, is yet to turn a profit.

Comparing the three, one can note that Microsoft has a dominant position. Microsoft's strong portfolio of cloud applications and long-dated footprint in on-premises IT infrastructure has helped it overtake its rivals as the top cloud vendor by market share.

Overall, PC softness is a temporary problem, and a slowdown might very well affect Microsoft's Office and Windows revenue. But this is something markets have already priced in and it is important to highlight that Office products are quite resilient. Moreover, Microsoft has demonstrated that it can command a premium price by implementing a 15–25% price hike for the Office product family—a quality that is highly prized in an inflationary climate.

When it comes to dividends and share buybacks, Microsoft does a great job of rewarding investors. Microsoft has boosted its dividend for 18 years running as of September this year. This business could be destined to become a new dividend aristocrat. When examining the dividend growth, it is clear that the dividend has been rising at a slower rate than earnings per share since 2018 (10.2% versus 25.6% yearly), which has led to a declining payout ratio. This could be a positive for further dividend growth ahead as it appears now to be once again in a growth phase.

Upon the conclusion of the Activision deal, Microsoft would acquire exclusive ownership of a number of big and well-known game franchises, including the Call of Duty series, World of Warcraft, and Diablo. This would allow Microsoft to become the biggest player in the metaverse and the only corporation with a commanding position in gaming hardware, cloud services, and content. The Microsoft-Activision merger has been expected by analysts, despite the careful UK antitrust investigation.

Looking forward, Microsoft's sales are expected to continue to grow near 10% despite the current volatile macroeconomic environment. Thanks to its product and service mix, the tech business is more resilient than its peers. And the company’s vast array of software applications and cloud services make it a top beneficiary of the growing digital shift. Looking back at its long history, it has demonstrated great profitability and an impressive growth track record. Given these assumptions and the decline in the company’s valuation as markets try to price in a recession, the mega-cap tech company is becoming an attractive stock for any long-term investor who believes the company's growth path will continue into the future.