This year we experienced our first recession since the global meltdown of 2008, we radically changed our lifestyles, we confined, we lost our jobs, we saw dislocating economies, an e-commerce boom, a bitcoin bandwagon, nearly 2 million deaths related to the covid-19 pandemic. What's next?

This year will stay in our collective memory for many years, and while are still unsure of how it will truly effect our future we can at least start with what what we know in the short run:

Small caps, EM, and also European stocks are all poised to perform well in the coming year. Having vaccines and a distribution plan on a massive scale is the first step to the world's economic recovery.

Small firms have come back into fashion. During the month of November the Russell 2000 and US small caps were top gainers at a rate of 17% compared with an 11% return rate next door at the S&P500. 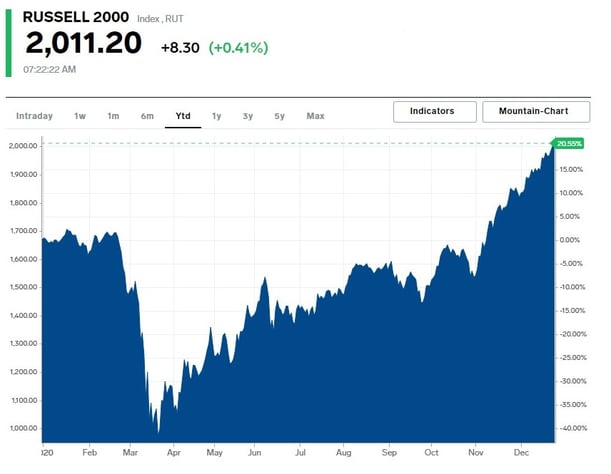 We criticize value stocks below because there is a change in the method by which stocks are now qualified to fit Graham's value stock definition. There remains however, small cap firms that are value firms that lost during covid-19 and are now set to gain next year. Small cap firms sitting on dry powder (free cash flow) now have room to grow.

Emerging markets are widely expected to outperform this coming year. A weaker USD, China recovering and a new US administration offer many new roads for EM optimism. A more globally-oriented US administration creates a positive outlook for countries seeking trade deals and economic cooperation. The UN's new climate change goals of lowered emissions could however hinder EM's progress since they still need to pollute to industrialize fully. Overall the MSCI index is booming and could continue on this trend later next year.

FAANGs (Facebook, Apple, Amazon, Netflix, Google) have tremendously benefited from covid-19. This peer group has shown remarkable resilience against the covid-19 recession. E-commerce popularization has helped increase the consumption of technology (hardware and software), such as stay at home products. This has created a delightful scenario for FAANGs to profit while older industries lose out.

Amazon and Apple are the biggest winners followed by streaming service Netflix. Let's see what the key drivers are for 2021 below.

5G will be a major driver in seamless data transfer, remote work, health diagnosis, communication networks, drone technology, e-commerce, and contactless operations. The iPhone 12 introduced 5G and has gathered a large flock of buyers. Faster networking speed is also a plus for media consumption which it seems everyone is entering into now (alongside self driving cars).

Facebook's biggest market is in India and this year FAANGs have all been increasing their exposure in the young and massively populated country. Amazon invested in small businesses going digital, Google launched a new fund to invest in Indian talent, Facebook's deal with Jio will help its traffic and footprint in the country, and Netflix launched a new low cost mobile only subscription there.

This segment speaks for itself. Contactless payments through Apple Pay, Google Pay, Amazon Pay and Facebook's WhatsApp are driving the future of consumer transactions. Let's not forget that while this growth is impressive the trend is not new; the fact is that China has used contactless payments at restaurants and for peer-to-peer transactions for years. We are just catching up.

Commodities have been out for the best part of a decade. Economic recovery and overall investor optimism driven in large part by vaccine solutions has pushed up the price of commodities. Prices have passed last years' levels, with copper, iron ore and soybeans reaching new levels (not to state Aluminium, and Cobalt). This increase is in large part due to the Chinese demand and an upsurge in EV and expected consumption next year.

Commodities are cyclical assets rising and falling with the world's economic activity, which implies their positive ranking as a beneficiary of any recovery going forward. Not all commodities are not born equal; U.S. natural gas could see more gains than agricultural commodities who might not suffer from similar supply constraints.

Some analysts have noticed that the Chinese credit cycle has peaked and they forecast a lower base for metals prices in 2021. However, other bullish arguments point to the transport industry picking up speed, the car manufacturing industry coming back, and the growth of EV and renewable energy investments which should bolster prices.

See our Coinbase  article to learn about the crypto platform's incoming IPO. This IPO speaks volumes to social adoption of Bitcoin, Ethereum, Ripple (XRP), and pretty much any crypto asset class (see also our work on NFTs).

What happened this year? It seems like everyone is jumping on the band wagon and biding on crypto. Really big players like Square and MicroStrategy own tons of Bitcoin, and some investment firms are clear about exchanging their positions from Gold to Bitcoin.

A quick reminder graph for you in CHF which is equivalent to $23,171.00 of the surging price of BTC:

Trading volumes have been off the charts earlier this week:

To quote NYU professor Damodaran, ask yourself one thing; is this a pricing or a value market situation ?

With consumer demand expected to surge after the pandemic it is natural to expect some degree of inflation, at least for the time being. Bill Dudley was until 2018 the vice-chairman for the Fed's interest rate setting committee. He warned that sharp price increases might be part of the plan to balance the demand with the available supply which the pandemic has hindered (think supply chains dislocation). Some urge that the rates could go unchecked and surpass the 2% rate set by the Fed as target post recession. Three effects matter:

1. After effects of the stimulus measures    2. Demographic changes   3. Changes in economic policy attitudes

After the influenza pandemic, inflation grew temporarily in response to bottlenecks forming (think of prices for shipping and inputs to make goods bought abroad, inputs like iron ore).

Economists today argue that the underlying driver of inflation is both the public's price expectations and the health of labor markets which both seem to side against incoming inflation.

Some argue inflation is a result of political and economic and demographic dynamics. An ageing population becoming richer matched with immigration barriers could keep import prices low and inflation high in developed nations. Some also say that governments are becoming more tolerant of inflation as the pressure on government budgets become more apparent. Inflation for the long run could help ease off remaining debt's value (see present value formula).

Overall the current consensus is short term inflation will rise following the widespread public distribution of covid vaccines. Aggressive and persistent inflation above 2% is not expected, though less improbable than in recent times.

Brexit is a significant historical event since it is the UK redefining its economic structure. Imagine that tomorrow wherever you are in the world, the prices of wine were to suddenly increase, or that your habitual ferry starts to take a different route to work. These are small but significant differences.

If there is no trade deal, businesses would start paying more in taxes for things like bread or cars or wine. Banking services, airlines and train services, medicine and the sharing of information with the EU could change dramatically too.

There should be a deal of some type since the EU and the UK both benefit from a Nash equilibrium scenario, where in the end they are inmates on the same continent. The EU will try and wiggle its way to improve its situation with the UK while the UK seems more keen on maintaining what it already has without granting more power to the EU.

According to Michael Mauboussin and Dan Callahan of Morgan Stanley Investment Management, the digital age has made it difficult to use the same old methods to value stocks today. Value investing as a concept remains relevant to investing--take advantage of the gap between a stock's intrinsic value and its market expectations. However today, we have transitioned from a brick and mortar era to a world of intangibles. A relevant book from 2017, Capital without Capitalism by Haskel and Westlake explores the topic in more depth if you are bored during holidays.

Intangible capital distorts measures of earnings and book values so the company's worth is tougher to calculate. How do you set a number on a brand for example, or an idea or even software? How about goodwill? Professor Damodaran of NYU says, ''For much of the past decade, value stocks have lagged behind the general market and are a long way behind “growth” stocks, their antithesis'', see the chart illustration by The Economist: 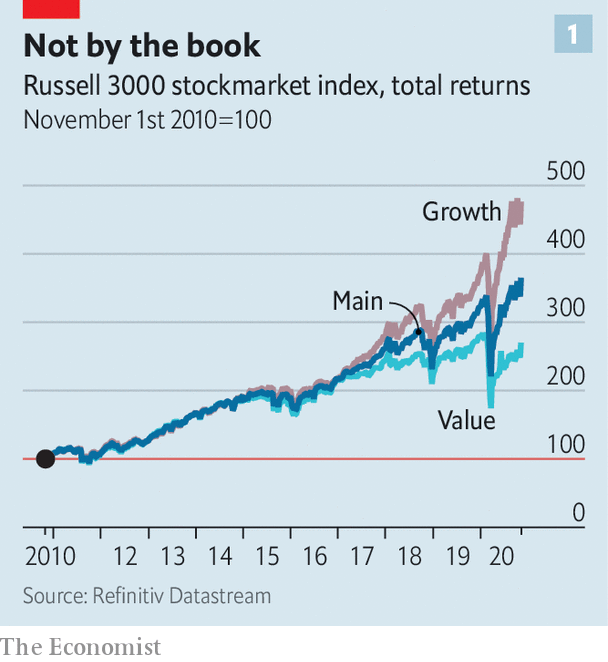 Many questions arise, since the nature of the companies we are seeing in this decade are completely different than before. There is a way out ! Break up the valuation piecemeal in a steady state section and a investment section. Good luck, and let us know how it goes.

Remember the Tokyo Olympics ? We don't either because they never took place. Remember Abenomics ? And the fact that Shinzo Abe had to step down this year because of health issues ? Our best wishes for a quick recovery.

The Japanese live on an island, and they depend a lot on imports to feed their population and to put gas in their small yet efficient cars. The government achieved relative success in controlling the virus, though not as well as neighbor Vietnam. However considering their import dependency, they managed alright.

Japan is a major car manufacturer and their economy depends heavily on the success of this industry. With demand for vehicles down in 2020, recovery has been slower in Japan. Earnings recovery have however experienced some positive changes, changes that Japan can expect coming into 2021 as the world moves on from the pandemic.

Japan is also a big technology player. A boosting of electronic and digital goods will enhance its position on the world stage and could see their indices improve. In terms of climate change, new PM Suga has clearly stated his affinity with the sustainable energy movement, and this can open up investment opportunities in Japan.