Netflix is reportedly looking to enter the video game business! We explore both the pros and cons of this initiative; while it is unclear if it will come to fruition, there are ways for it to work, and the market is highly lucrative.

It makes sense! The 200 million subscriber streaming giant—who produces a lot of its own content—is looking to monetize that content via gaming. Imagine playing a Stranger Things themed game or perhaps The Umbrella Academy as a superhero of your choice. Who would say no to this?

The news came out during Netflix’s last earnings call when co-CEO Reed Hastings and Chief Product Officer Greg Peters discussed the wide range of worlds Netflix is creating in its original series, and how they could further increase the fandom.

It just makes sense from a business growth standpoint, as Q1 earnings indicated a slowdown in growth stemming from less in-house content being made—video games would address this issue by simply creating more content.

The streaming behemoth is already making interactive content called ‘’Bandersnatch’’, but it wants to take a step forward into the gaming world after suggesting a $17B budget in cash dedicated to building out more content in 2021.

This was further brought to light with news that Netflix is recruiting a new head to lead their gaming efforts. While it makes sense for Netflix to tackle this burgeoning market, some make the point for why it might fail.

Why Netflix making games is a terrible idea!

There are quite a few hurdles in penetrating the video gaming industry. Competition from the likes of recently public Roblox, network effect strongholds like Fortnight and Call of Duty, the sheer cost of jump starting a video gaming enterprise, the seasonality of gaming revenues and hard to gauge consumer preferences congregate as headwinds to Netflix’s original idea.

Netflix getting involved in gaming, could be a failed experiment when we look back in five years. The main reason for this is that making video games that both work, and have broad-based appeal is a challenging feat. The video game industry is a risky business for many reasons; it is highly competitive, the talent pool good enough to develop games is scarce, and the demand for games is hard to harness as other games take priority and network effects make it so that people play where their friends already play.

Some industry experts point to failed attempts, with the likes of Atari and Interplay going under or the failed Cyberpunk game, as proofs of concept that pulling off making a good popular game is hard and risky.

Joost van Dreunen, author of One Up: Creativity, Competition, and the Global Business of Video Games, further points to Google’s Stadia, Amazon’s Luna, and Facebook’s scattershot gaming efforts as examples that Big Tech is bad at making games (Microsoft aside). In fact, less than two years after Google initiated a gaming effort, and less than a year after buying a studio, it folded back on the project.

Despite having some top-of-the-line intellectual property that could lend itself well to the video gaming world, another issue comes to mind. Look at Disney—it has some of the best and most loved content IP in the world, yet do you see them making video games? While Disney has failed three times in trying to make it in the gaming business as a standalone producer, they have found enormous success in licensing their IP, think Star Wars franchise games, and Spiderman games.

Furthermore, it is not clear how gaming’s seasonality would play out on earnings reports for Netflix, and if it might introduce a fluctuation worth avoiding. Statista says video game sales are very seasonal, and that according to NPD Group, video game spending usually peaks in November and December (red bars in the next graph) with monthly sales often more than three times as high as they are during the ‘’off season’’. 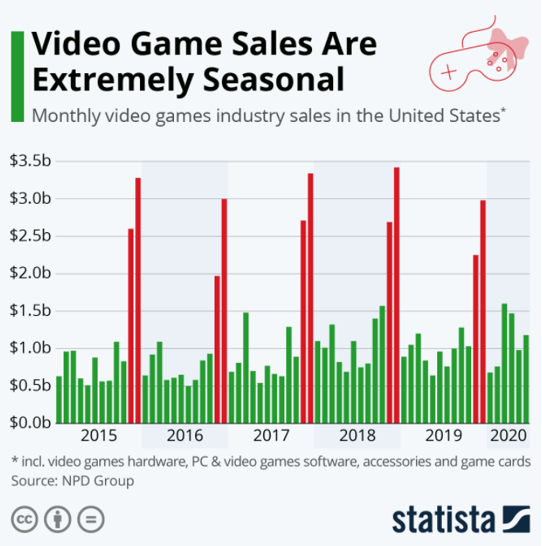 Netflix perhaps should not attempt to become a video game studio, and instead focus on finding partners to produce games on their behalf, much like the way Disney functions. This might be the best way for the company to make a dent in an industry already so competitive. The alternative would be for Netflix to buy its way in, spending a large sum of cash to acquire a game publisher like EA or Ubisoft.
Looking at things from a market standpoint it makes all the sense in the world to tackle the industry. According to Statista, the value of the video game market in the US alone so far this year is $65B. Last year alone, Microsoft generated $143B in gaming related revenue, a figure that makes investing and risking it in the gaming space sound reasonable for Netflix.

It is not exactly transparent whether Netflix is distracting itself from other priorities like fending off newly merged WarnerMedia and Discovery or limiting cannibalizing its streaming business. But one thing is sure; after Netflix bought Millarworld to acquire Kick-Ass, Kingsman, and after approaching Paramount to take on Star Trek, Netflix shows a huge upside potential in content alone, something actionable in gaming.

If Netflix decided to compete against Disney’s model, then it would need to get on par by buying more franchises, because maybe Stranger Things is not enough to justify making a video game but perhaps Star Trek might be.

Until it becomes a major franchise owner, Netflix cannot capitalize on strong viewership as much because they lack ownership of widely known underlying content. It therefore appears as though Netflix might be right in wanting to penetrate the gaming market later in 2022, but wrong in its self-confidence—it could make games, but first it needs to acquire more reliable content that justifies a major shift into gaming.