Nextdoor to go public via a SPAC deal worth $4.3B

Nextdoor Inc. has agreed to a proposed business combination to go public by merging with a special-purpose acquisition company (SPAC), Khosla Ventures Acquisition Co. II. The deal valued the social-media network at $4.3 billion--why so high?

Nextdoor is a social media platform founded in 2011 and based in San Francisco. The company offers services similar to Facebook’s but focuses on linking neighbors. Users can communicate together to greet newcomers, make recommendations on local businesses, and even borrow tools or sell their belongings that are no-longer needed. The firm is active in more than 275,000 neighborhoods in 11 countries and nearly 1 in 3 U.S. households is part of the Nextdoor community. They differentiate themselves principally by their proximity as they are helping people from the same neighborhoods to connect, which is part of their purpose to create a community that can rely on each other.

Think of a scenario where a dad is considering a day-care for his toddler. Instead of looking on the internet, he can directly ask his neighbors who might have better suggestions. On the web, you never know who you can trust especially when it comes to your children. Well, Nextdoor allows you to have that peace of mind since your own neighbors are recommending trusting people. On top of that, the app has an authentication process where you must first prove your identity to sign up.

Nextdoor can also be useful for businesses as it allows them to promote their brand, maintain a dashboard, update their business page, and communicate with clients. The advantage of Nextdoor for companies compared to other social medias is that it targets potential geographically close clients who they might develop a long-term relationship with. 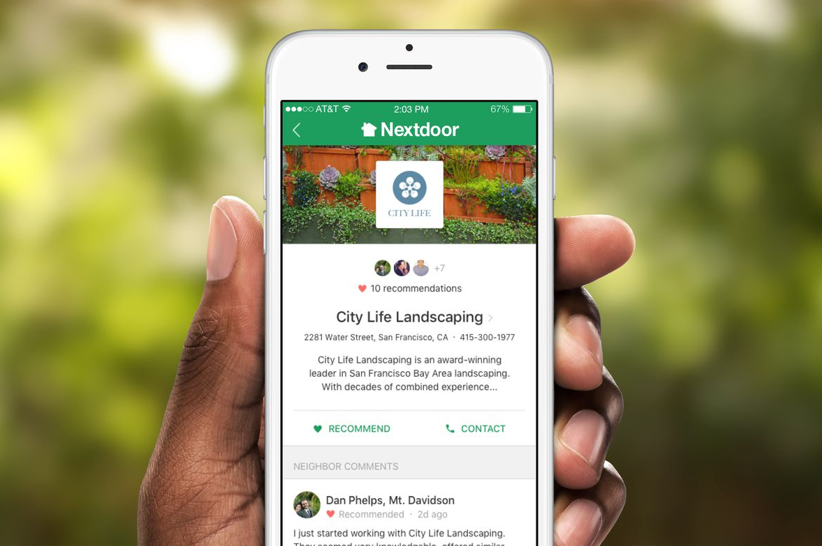 To understand customers’ needs and create a successful business model, Nextdoor has partnered with leading researchers to conduct a market analysis. Some of their findings are the following: 75% plan to shop locally, 80% expect to work from home at least 3 times per week, 73% say neighbors are one of the most important communities in their lives and knowing at least 6 neighbors can reduce loneliness. All the aforementioned points can predict growth opportunities for the social media platform and the following graph shows the company's loneliness survey.

Being a venture-funded company, the firm was not required to generate revenue to fuel its operations at the onset. However, the company started making revenue in 2016, by their three revenue channels. Now, Nextdoor generates almost all its revenue from advertising and partnerships. It offers three programs (Local Deals, Sponsored advertisements, and Neighborhood Sponsorship) that make revenue by fixed or monthly fees. The sponsored posts are the ones that bring the most money to Nextdoor as they can be very high. As a matter of fact, companies must spend at least $25,000/month to sponsor their content.

Nextdoor saw its revenues reach $123M compared to $83M in 2019 and forecasts plan a 44% growth for 2021. An increasing engagement, improved fill rates, and non-supply dependent local revenue are all keen to drive growth further. Like most growth companies, Nextdoor faces consequent costs and remains unprofitable today. The social media firm saw its net losses increase by $2M in 2020, reaching a $75M net loss. Its forecasts do not show any improvement for the next two years, on the contrary, the company is expecting to have a higher negative result.

This unprofitability can partially be explained by the operating expenses that the firm is dealing with. Indeed, in 2020 those reached $200M, a $42M increase since 2019. Overall, Nextdoor is confident about its future growth and is strengthening every loop of its business model to achieve their goals. They mainly focus on enhancing their advertiser performance as it creates revenue opportunities, but also work on expanding their product offer and their customer engagement.

Why Nextdoor picked the SPAC route?

The reason why Nextdoor did not go through a traditional IPO even though it is an established business can be explained by three factors. First, Sarah Friar, Nextdoor’s CEO, wanted to create a long-term relationship with its investors. The second reason concerned the deal’s certainty, Sarah believes that the proceeds of a SPAC deal are bigger than the ones Nextdoor would have raised with a traditional IPO allowing them to start planning and even executing their business strategy as they are certain of what will be on their balance sheet.

Finally, they aimed to find investors that bring more to the table than just capital. Nextdoor wants to anchor its business in the social media industry in the long-term, they want to collaborate with people that push them to get outside their comfort zone, that have knowledge in recruiting as employees are the main force of any company. From Mrs. Friar point of view, Khosla checks all the boxes. A SPAC deal is also interesting because it is cheaper, quicker and an easier process as it allows the company to access the capital they need quickly and affordably.

Nextdoor achieved to become one of the most frequently used consumer products in the U.S. after Facebook, Snapchat, Google Chrome and Instagram. Over the years, the company developed a strong business model that allowed them to build a highly active customer base, however they still struggle to increase their revenues. The SPAC deal will thus be interesting to follow as it might influence revenues. The latter with Khosla Ventures is expected to be finalized in the fourth quarter of 2021.