Nio, between Covid and hope

China's "zero-covid" policy is weighing heavily on the economy, and Nio, one of China's most famous electric car manufacturers, has suffered a production stoppage due to a severely restrictive policy and a lack of parts from suppliers.

In addition, the Chinese company is on the list of companies that could potentially be expelled from the New York Stock Exchange.

However, Nio produced its 200’000th car on 26 April and is aiming to expand its influence beyond the Chinese border. The company was even able to start production of the new ET5 in its new factory in Hefei at the end of April.

Founded in 2014, Nio has become one of the leading players in the Chinese electric vehicle market along with Li Auto, BYD and Xpeng. The majority of Nio's sales are to the Chinese market.

Cumulatively, Nio has sold close to 200’000 electric cars in total, including nearly 100’000 in the last twelve months. And there is huge growth potential for the company as China is one of the largest electric vehicle markets in the world.

In addition, Nio is preparing to expand its presence beyond China; the company began selling its ES8 model in Norway late last year.

This year, NIO delivered 9’652 vehicles in January 2022, which represents an increase of almost 34% compared to the previous year.

Secondly, car sales fell to 6’131 in February, about 10% higher than the previous year and significantly lower than in previous months. The February slowdown is not in itself a cause for concern, as the Chinese New Year period is a quiet time in China.

In fact, sales rebounded again to 9’985 in March, showing 38% growth compared to a year ago, but fell back to 5’074 in April, 30% less than a year ago due to the latest Covid measures put in place by the Chinese government.

The new models are coming

The all-new NIO ET7 entered the Chinese market on 28 March and is expected to be available in Europe before the end of this year.

The new NIO ES7, a five-seat mid-to-large SUV and the ET5, a mid-sized electric sedan with an impressive range claim are waiting to find their drivers in the coming months.

The current three main models, ES8, ES6 and EC6, will be upgraded in May with new technologies, including an interesting upgrade option for existing cars as well.

But the company is facing production interruptions

But the Covid zero could interrupt Nio's plans and delay deliveries. The company announced a halt to car production in April, under pressure from a lack of parts from suppliers and the government's strict control policy. Activity resumed a week later, yet the threat of another halt is ever-present as the Chinese government insists on combating the circulation of the virus at home: a near-impossible task given that the rest of the world does not follow a similar policy of zero exposure, but of herd immunity.

It is therefore difficult to estimate how long Nio's factories will remain under pressure, but repeated shutdowns could have a significant impact on the company's business, and on predictions of when the company should break even.

Although Nio is growing rapidly, it is a young company that has not yet made a profit. The company is expected to make its last loss by the end of 2023 and to become profitable from 2024. But estimates are based on a high growth rate of 75-80% year on year, on average, which implies uninterrupted production capacity and sales.

Thus, disruptions to production due to the Covid measures could further delay the time to profitability.

Government repression is coming to an end, but...

Chinese stocks have suffered heavily from the tough crackdown on China's largest companies since the end of 2020, as part of Xi Jinping's "shared prosperity" programme.

But recently, Chinese officials announced that the crackdown would slow down, giving a sigh of relief to investors in China's most popular technology stocks.

Moreover, in contrast to the interest rate hikes of major central banks, including the Fed, the People's Bank of China (PBoC) remains supportive of an expansionary monetary policy. Yet loose policy may not be enough to boost the image of China's tech giants if the government remains stubborn about handling the health crisis, and if data sharing with US auditors is not established.

China has announced that it has changed its rules on financial data sharing to allow US regulators full access to audit reports so that Chinese companies can remain listed on US exchanges. But the latest news has not spared Chinese companies listed in America, including Nio, from the threat of exclusion from US exchanges.

In response to the threat, Nio is planning a secondary listing in Singapore, in addition to its listing on the Hong Kong Stock Exchange.

On the price side... 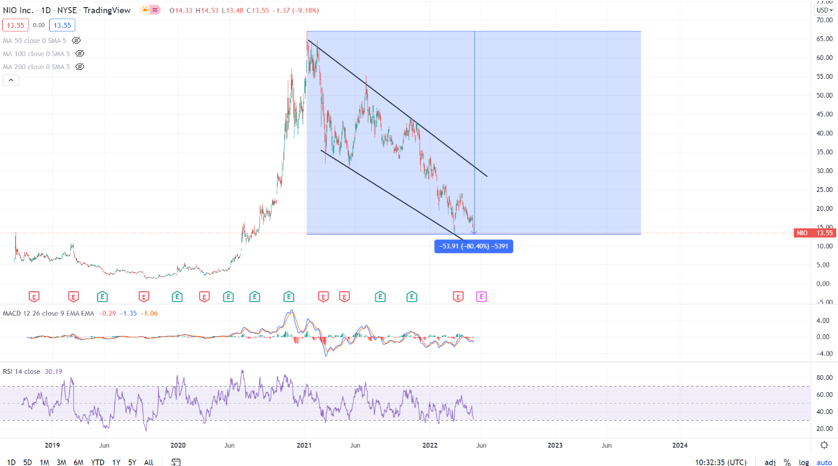 The company was riding a positive mood in Chinese equities before the government crackdown on Chinese equities in late 2020, early 2021. Nio's share price has lost up to 80% of its valuation on the New York Stock Exchange between January 2021 and today.

It is difficult to predict whether the price has bottomed out, but the sharply reduced share price could be an attractive buying opportunity for Chinese equity investors.

Analysts predict that Nio's share price will rebound by more than 125% over the next twelve months. The most pessimistic forecast points to a correction of nearly 70% on the CNN Money survey, while the most optimistic expectation is for a USD82 per share rally of over 500% in one year.