The timing of the current pullback in oil, just as US inflation hit a 30-year high might be instructive. Is high inflation starting to pose a risk to the demand outlook for oil?

The justification for higher oil prices over the last 18 months has been two-pronged, that oil demand would outstrip supply during the post-pandemic recovery and that historic amounts of added liquidity from governments and central banks would lift the price of all commodities.

The supply side of the equation looks intact. Despite pressure from the Biden administration, OPEC+ decided to stick to a plan that would only raise production only gradually. Demand for oil remains strong as travel restrictions are eased and as factories worldwide catch up from lost production in 2020.

But rising inflation is clouding the outlook. Inflation expectations are growing from already elevated levels following this week’s bumper US CPI report. The open questions moving forwards are:

What’s happening to the oil price? 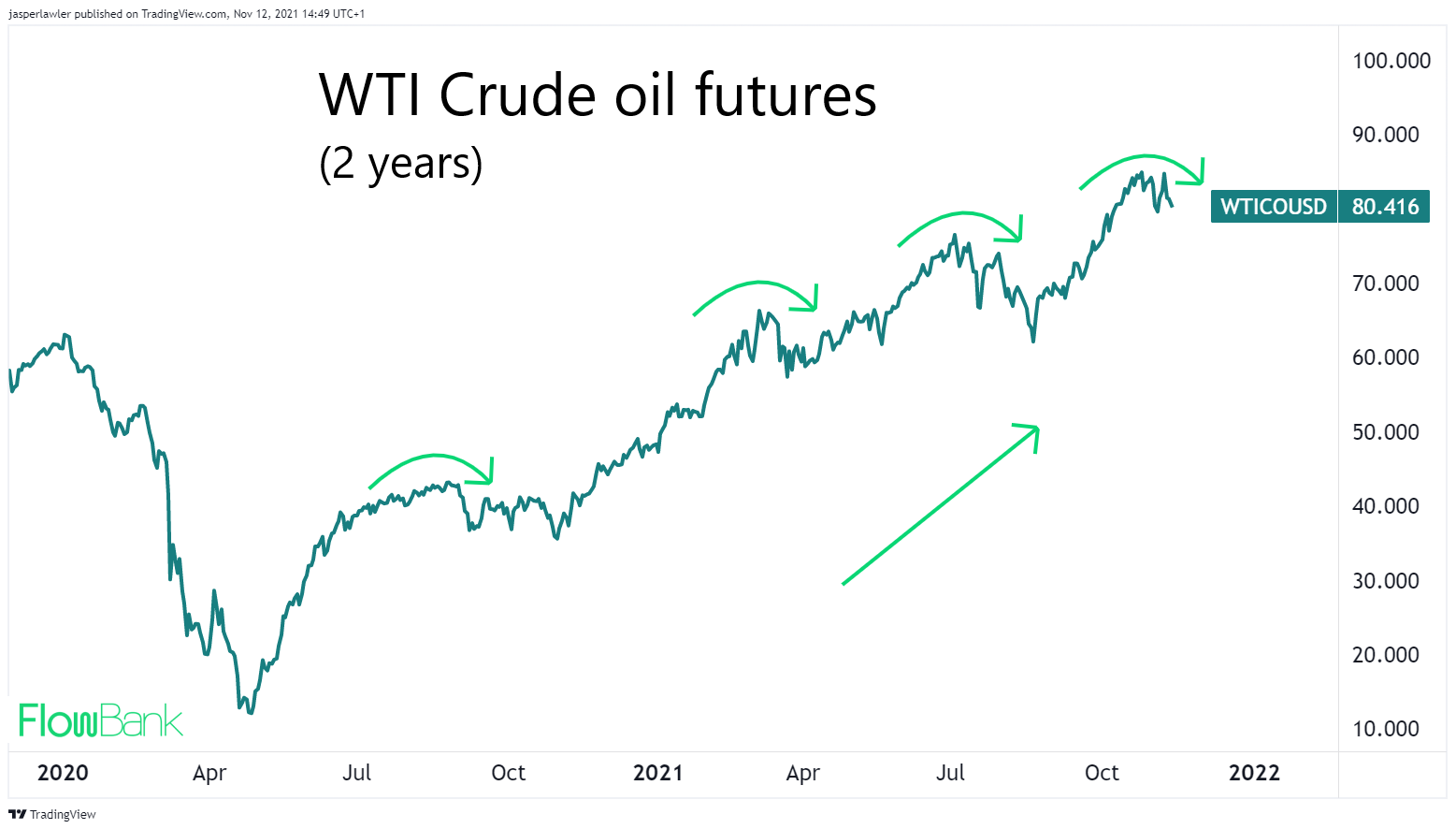 The weekly chart of WTI  prices shows that oil prices have broken out to a new range but are in the midst of a 2-week consolidation. Former resistance is now supported near $77 per barrel. The upper end of the spectrum is the 2014 highs near $107.90 per barrel. 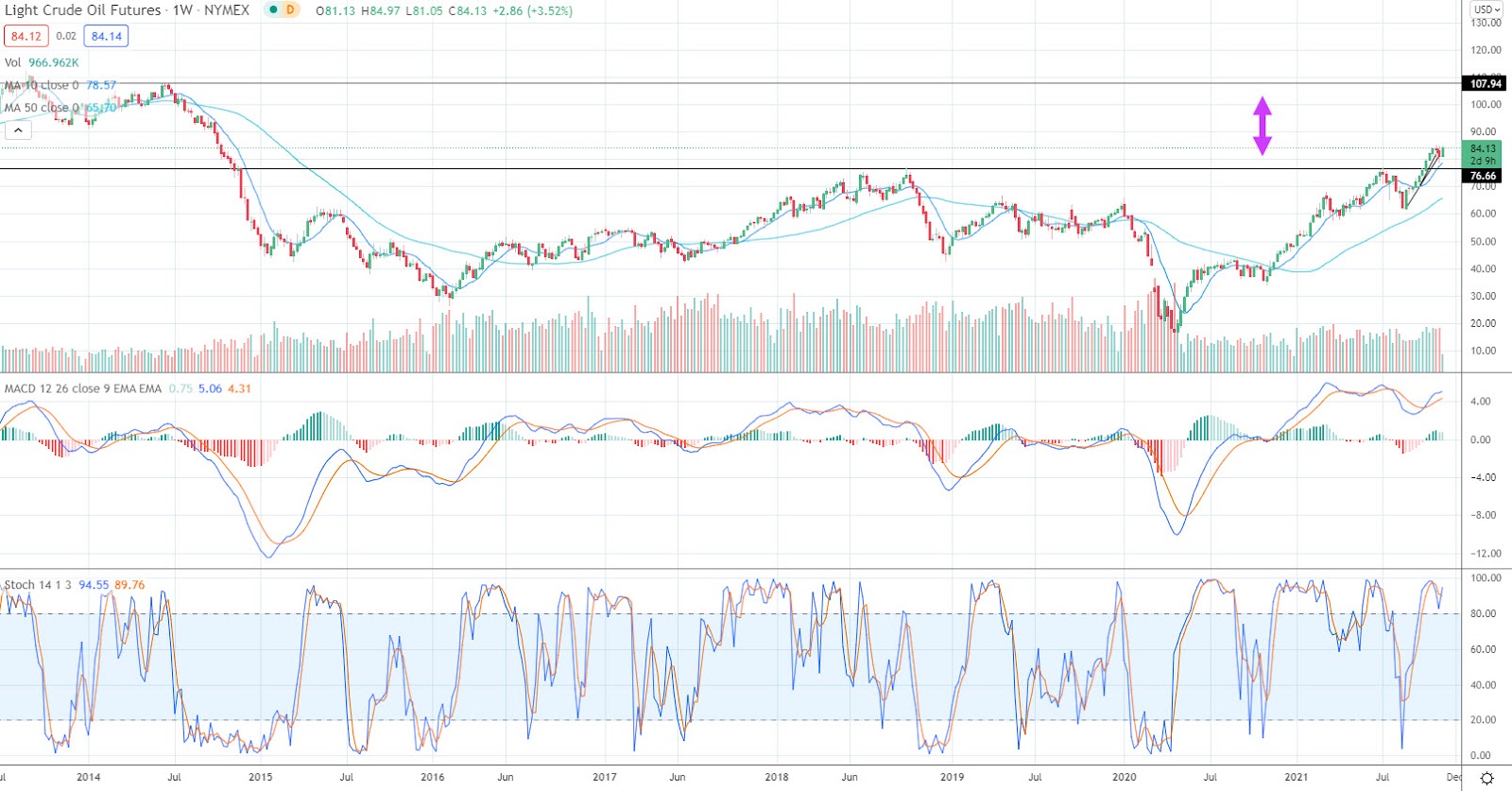 The bullish case for oil

With demand rising and supplies remaining subdued, the Biden Administration asked OPEC and Russia to consider increasing production. Officials from OPEC, Russia, and Gazprom (who helps supply Europe), denied these requests and decided to maintain a plan to raise output by 400,000 barrels a day.

Biden is trying to focus on OPEC and Russia. Meanwhile, in his own backyard, oil output is still down 1.7-million barrels a day from the peak seen in 2019. Biden said, " The jump in oil prices is a consequence of, thus far, the refusal of Russia or OPEC nations to pump more oil." Despite a plea to Saudi Arabia and Russia, the 23 oil-producing cartels remained steadfast.

Part of the reason supply has not been able to respond as quickly to the uptick in demand has been less investment in oil infrastructure and a move toward a green energy policy. While the total number of U.S. active oil rigs has rebounded since the lows of July 2020, the number of active rigs is still approximately half of the highs seen in 2019.

Risk to the oil outlook

The risk is that rapid increases in oil prices are self-defeating. Higher prices at the pump mean less spending power for consumers and higher energy costs mean the price of everything else is going up too, possibly resulting in even less spending. In ordinary circumstances consumer spending might have already tailed off but generous pandemic-era unemployment benefits are offsetting some of the rise in prices.

Easy money policies from both central banks and helicopter money from national governments helped spur a very quick economic turnaround. The Federal Reserve might have just started tapering but is still buying billions in Treasuries each month, while the Biden administration just passed a $1 trillion infrastructure bill with possibly another $2 trillion in spending on the way.

At some point markets will need to price-in an end to these kinds of policies, perhaps in response to runaway inflation, and one way that can manifest is through a lower oil price.

The demand/supply imbalance is increasing the number of bets that oil prices will continue to rise. According to the latest Commitment of Traders report released by the Commodity Futures Trading Commission, managed money is long 357K crude oil futures and options contracts - nearly 10-times the number of hedge funds that are short-oil-futures and options. The trend is clearly with oil bulls but the trade looks increasingly overcrowded.