Peloton stock: buy the dip or a safety hazard for your portfolio?

Peloton saw its share price affected by a major treadmill recall event related to the death of a child. Is the 15% dump a moment to enter, or will there be more falling ahead ?

Peloton is the largest Global interactive fitness platform with a community of over 3.1 million members. The fitness firm offers two products—a bike and a Treadmill—which include a touchscreen that streams live and on-demand classes for indoor cycling, running, walking, and pretty much anything else (even yoga and meditation). Peloton operates In North America, the UK, and Germany and became profitable in 2020 with a net income of $49 million. The company has been a beneficiary of the pandemic led work from home movement which pushed the share price north by 200% in 2020.

Peloton has the added particularity of mixing in streaming into its core business model which enables the firm to create a socially dynamic aspect to its fixed product offering. Prices for its bikes and treadmills range in the $3,000 region, but Peloton has been able to sustain its premium via an upswing in popularity. This high price is part of the reason why reputation matters for Peloton to continue driving its sales—events hindering the brand come as an added handicap to expensive products.

In contrast to the last graph, this figure shows Peloton’s 2020 surge. 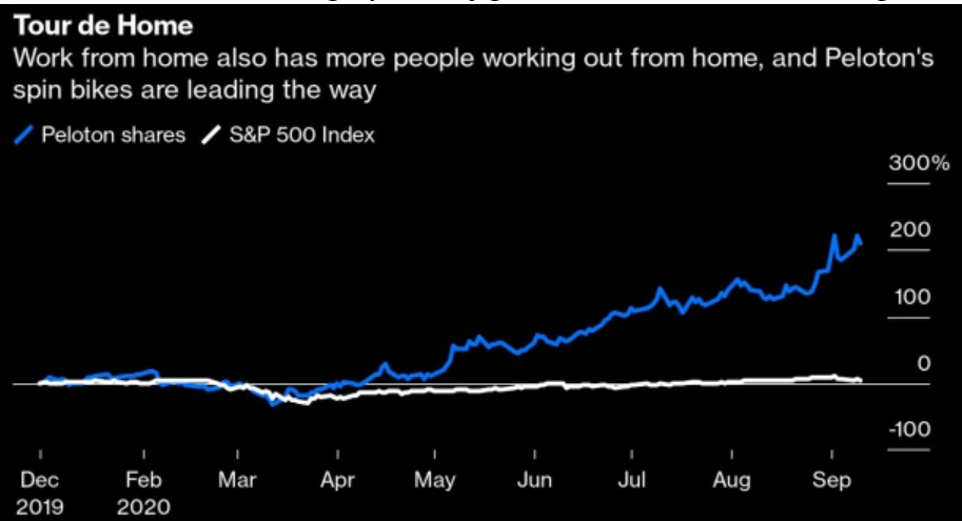 Earlier in the year, articles came out in major news outlets suggesting that Peloton treadmills represented a health hazard—mainly to pets and small children. A recent video shockingly shows a child getting sucked under an active Peloton treadmill. The U.S Consumer Product Safety Commission, the agency charged with protecting consumers from dangerous products qualified the machines as a serious danger to children putting a stain on Peloton’s Reputation.

Peloton said last month that the machines are equipped with a safety key to ensure the treadmills remain off when not in use and that parents should be careful to turn off the machines when done with. However, an increasing number of injuries have occurred in the past months putting a mounting pressure on the brand. The company has already been struggling with a slow down in deliveries as supply chains stalled domestically and abroad. Despite this slow down, sales are up at Peloton, and they sit on more unearned revenue than they know to do with (something good when legal pressures are around the corner).

How has Peloton responded to this situation?

Peloton reacted to the accusations that its products were dangerous in what seems to be a reasonable disagreement. Most fitness machines are dangerous, labels are printed to reassert this fact and adults should be mindful of their property when children are around. However, this sort of PR is not the most responsible approach to the situation, especially after a Tread+ caused the death of a child.

Peloton shortly thereafter realized its PR mistake, and tried reversing back to a much more empathetic move, showcasing humility and concern for their customers (a modern take on business). The CEO apologized for not complying sooner with authorities who had requested for a product call-back. Today, customers have the option to receive a refund on their Tread+ and those who do not ask for a refund are granted extra benefits in things like a complimentary machine fix.

Furthermore, the company began working on developing software that would lock the machine and enable it from their app to reinforce its safety standards. This is a move typically seen in corporate responsibilities of its consumers. So far, 125,000 treadmills have been recalled and peloton stock has fallen 15% to an 8-month low.

Affirm feels the side effects…

We covered the Affirm IPO here if you want some background and technical insight, but one thing is sure: what we were afraid could happen, did. Their reliance on Peloton has now materialized as a real threat to their business, and Affirm absolutely needs to grow up and expand its recurring revenue channels before they can begin to command a larger market capitalization.

In other news, some analysts predict a 60% growth in their gross merchant volume (GMV), a metric used to understand the value of tractions a business is seeing, in their non-Peloton segments. This is important news because it is the only way forward for Affirm who sees 19% of its GMV coming from one large player (Peloton).

Think of this as basic portfolio management theory: any well-balanced portfolio considers diversifying away risk—this is what Affirm is doing now with partner diversification. However, Affirm’s management team is well regarded by investors and should be competent enough to drive the switch, with the Spotify roll-out being an example of proactive thinking.

Affirm revenue growth continues to increase within the Buy Now Pay Later (BNPL) category despite some strong competition seen in the likes of Afterpay. The total addressable market is quite large and said to expand 4X by 2024, and the BNPL business model is still in its infancy stage, on a global basis. Some risk on the credit side could persist for Affirm as competition rises and unit economics weaken, and as competitors roll out better interfaces geared at lower-ticket, frequent buyer items (Affirm’s focus is on larger ticket items).

What is next for Peloton?

BoA just announced a punishing neutral rating change on the stock with a price objective switch from $150 to $100. As stated earlier, the apologetic tone, the Tread+ recall, refunds and machine repair offerings have certain consequences. It is unlikely that a massive number of people decide to send machines back especially as Peloton rolls out perks to those who do not.

Subscribers most likely will not quit using their machines or their streaming however, it is possible that this situation could hinder Peloton’s hopes of offering a lower-end treadmill. The lower-end tread could enable Peloton to penetrate a much larger market, driving up bottom lines but some estimates now say this plan will be pushed back to the fall.

Despite a slower roll out of cheaper treadmills to come, Peloton looks well-positioned to surf this wave, however harsh it may seem. Their comparative advantage is their connected fitness opportunity, a unique product differentiator with a lot of social interest around the world. Reports also indicate that their US website traffic in April was up 82% year over year, monthly downloads are trending up and more products could be offered going forward as the firm expands into its large total addressable market. 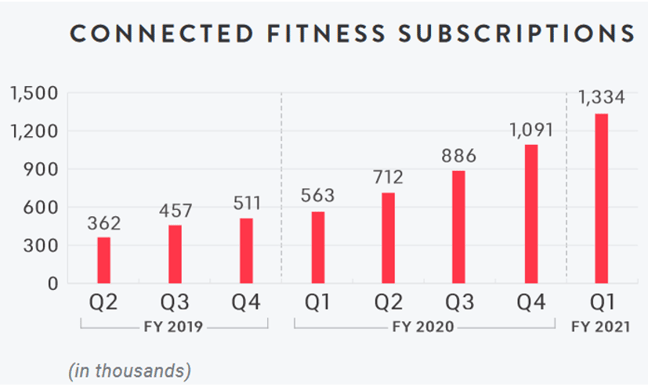 Peloton has trended South so far this year on supply chain disruptions but this week has punished the share shedding 15%. 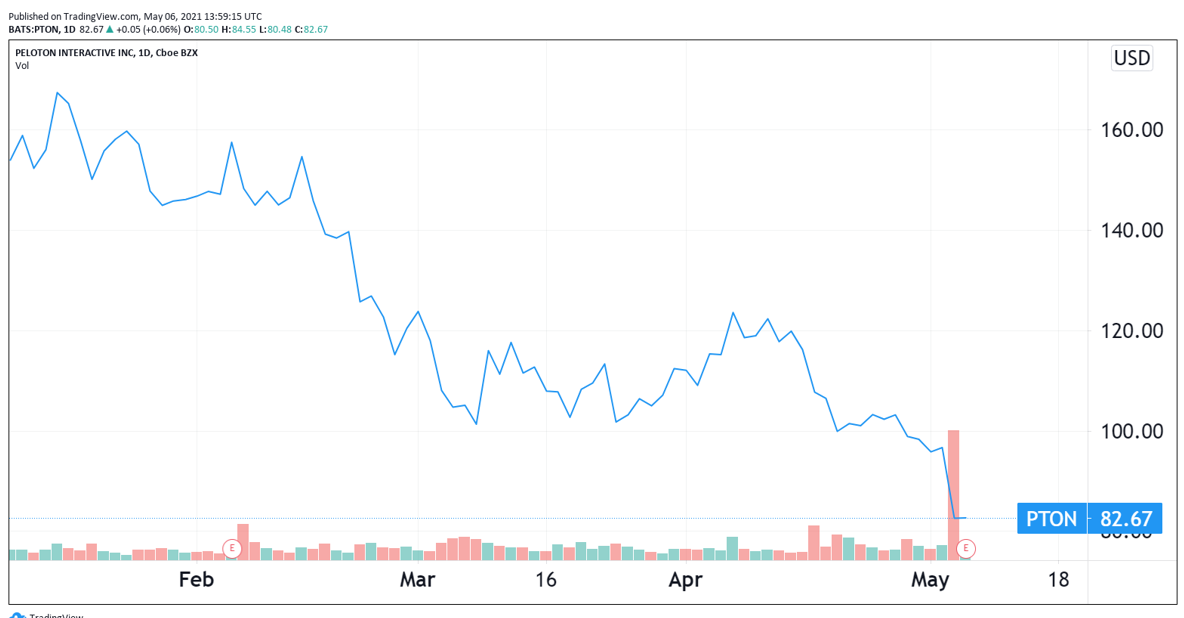