The collapse of tech stocks in 2022 has been a key market theme. The NASDAQ has noticeably underperformed the S&P 500, while tech stocks within the S&P 500 have been some of the biggest laggards. As we move towards H2, will tech shift from laggard to leader again?

In terms of broader movements in US stocks, it’s been a tricky year all around. The S&P has seen a more than 20% plunge from YTD highs before again bouncing over the last week and recouping around 10% of losses. But as we noted, the Nasdaq has seen bigger losses, close to a 25% drawdown from its record high.

Because the tech sector is more growth-orientated and thus more speculative, it tends to experience amplified moves compared with the core indexes. One particularly effective way of tracking the moves in the tech sector is through monitoring the XLK – SPDR select fund in technology, which runs on the NASDAQ.

The Select Sector SPDR Fund comprises 75 of the biggest tech names listed as part of the S&P 500 Index and offers a way of gaining exposure to the indexed movement of these tech names.

As of June 1st, the fund has a $41.8 billion market cap. In terms of the key names, Microsoft and Apple are the largest components, with a joint 22% weighting. This is followed by Visa, with a 4% weighting and NVIDIA and Mastercard, both weighted roughly 3.5% each. 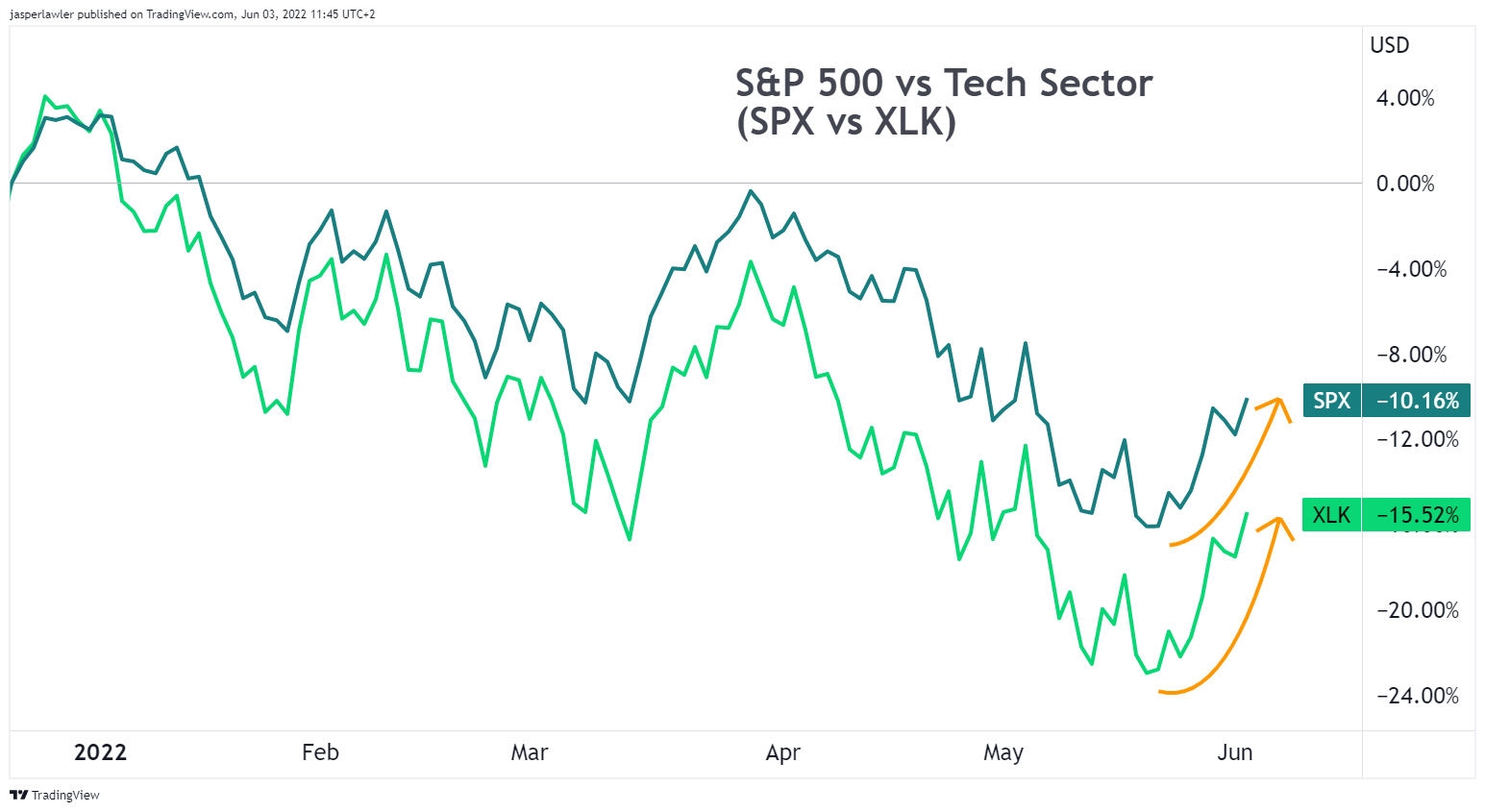 Putting this in perspective then, this means that over the most recent period, tech stocks, as represented by the XLK, are outperforming US core stocks. The rebound in XLK over the last week has overtaken the rebound in the SPX.  The big question now is whether this move will continue or whether this outperformance is a blip?  With this in mind, let’s look at the key factors that have been driving price action in US markets and examine how these factors are likely to influence price action going forward.

One of the biggest drivers of price action in US stocks has been fluctuating Fed rate hike expectations over the year and the impact this has had on bond yields as well as the USD.

Over much of the last two quarters, the Fed has been turning increasingly hawkish. The initial 25 bps rate hike in Q1 was accompanied by a firmly hawkish outlook which developed rapidly into the 50bps hike seen in May. Since that meeting, Fed commentary has been aggressively geared towards continued rate hikes over the remainder of the year. While 50 bps have been signalled to be the new-default size during this period of catch-up, the Fed even opened the door for potentially larger hikes.

As US rates rose and yields soared, tech stocks were among the hardest hit. Tech stocks typically trade with a higher beta than core stocks given the tendency to view them as riskier assets. Consequently, the broader stock sell off was amplified in the tech sector.

Adding to this state of bearishness was the growing wave of risk aversion which gripped markets over recent months. The building tide of central bank monetary tightening, against a backdrop of record inflation, has fuelled an uptick in recessionary fears. Indeed, many central banks including the Fed have warned of the likelihood of a slowdown over the remainder of the year. Again, in these conditions, tech stocks have been the big loser.

This fear of inflation hurting the global economy has been exacerbated by China returning to lockdown over much of Q1 and into Q2. Large parts of the country, including Shanghai were returned to lockdown, fuelling fears of a slowdown in China as key indicators started to plunge. Given China’s prominence in the tech world, both as supplier and consumer, this was a major blow to the sector with companies such as Tesla having to halt operations there due to the disruptions caused by the lockdowns.

A Change in Narrative?

Over the last fortnight, however, we’ve seen a shift. China announced that Shanghai will exit lockdown as of June 1st which has been a major boost for global risk sentiment. With global supply chains getting back up and running and the expectations of huge pent-up demand boosting activity, tech stocks have been among the earliest beneficiaries.

Alongside this, Fed expectations have started to morph with a growing view among key market players that the Fed might look to pause rate hikes following its June and July hikes. We’ve even heard suggestions from Fed members that the Fed might look to take in a period of assessment after the coming, well-signalled hikes. This shift in view has been helping stocks recover and, if this view gains traction and especially if it’s confirmed by the Fed, if old patterns of correlation resume, we can expect tech stocks to strongly out-perform US core stocks in the coming months.

Could tech outperform in a bear market?

The broader tech index hides some of the pain that has happened inside tech. One only glance at the 18-month performance of Cathie Wood’s innovation ETF geared towards some of the riskier names in tech to see some of deep losses incurred.

An argument could be made that these more specualtive names were the first to get hit during the market decline and so have already taken most of the damage. Another leg lower could see more stable insustries and sectors play catch-down while tech remains relatively stable.

However, just because a stock has declined -80%, it doesn’t mean it couldn’t half again, leaving it with a -90% total decline. In fact, for a stock to have performed that badly, further weakness would be the more probable scenario. Such is the risk with tech. Added to that, the tech industry leaders including Apple and Microsoft have held up, if they decline- the rest of tech including the XLK could easily come down with them.

Finally, let’s take a look at the technical chart of the XLK.

Price has been moving in a clear bearish channel since the 2022 highs. However, the recent bounce off the 129 level suggests we might be about to see a larger relief rally as we saw over March/April time. If price can break above the 143.50 level (the March / April low) then the key test will be the upper trendline of the bearish channel and the 150 level.