The pro-Vladimir Putin ruling United Russia party has won another landslide election in Russia. But is this good news for Russian stocks, which have just doubled off their 2020 low?

The best known Russian stock indices are the MICEX index and MOEX index.

The MICEX, which include the 50 biggest names in corporate Russia, including the like of Gazprom, Rosneft, Sberbank and Aeroflot has doubled from 200,000 rubles in March 2020 to 400,000 in September 2021. 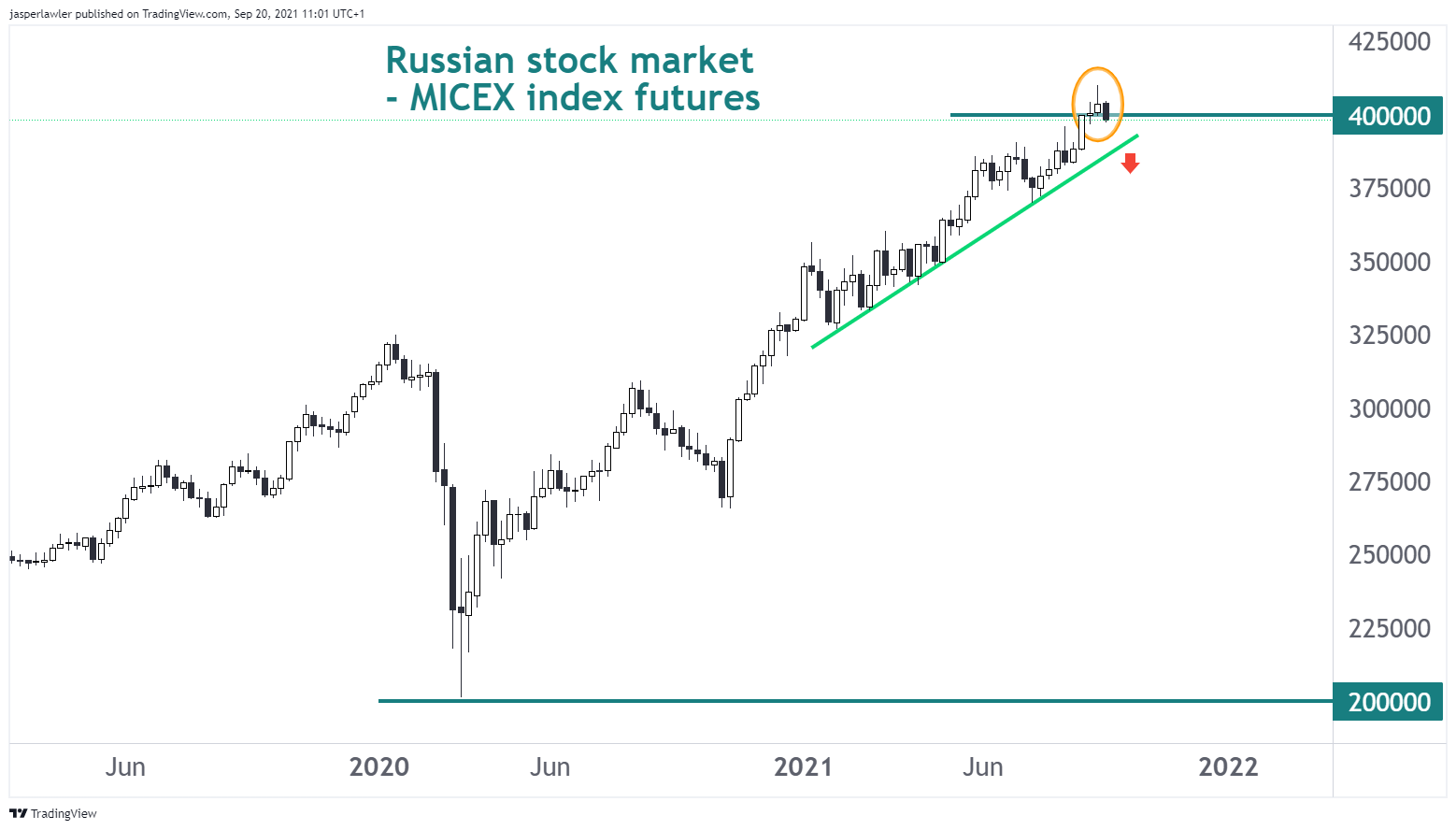 There is now a rising risk that investors begin to book profits after such a prolific run.

A bearish shooting star candlestick pattern on the weekly chart above, which took the price back under the psychological 400,000 level could be the first warning of further weakness. A break below the rising trendline that has underlined the trend in 2021 would add bearish confirmation.

Why have Russian stocks been so strong?

The first thing to establish is that Russian stocks have been in an uptrend for the best part of 20-years. It took a long time for the MICEX index to recoup the losses after the 2008 financial crisis but the index has been a strong performer ever since. It’s notable that the 2020 bear market ended right at the 2008 peak. If history were to repeat itself then any upcoming correction might find support near the 2020 peak.

There have been several fundamental factors pushing up interest in Russian stocks since 2016, which we list below.

The central bank of Russia spent the duration of 2016-2020 lowering interest rates, but they were able to do so after demonstrating their inflation-fighting and currency-defending credentials when needed in 2013/14. Hiking benchmark interest rates up to 15% to fend off a huge devaluation in the ruble when the US and Europe imposed sanctions after the annexation of Crimea in 2013 has helped tamp down inflation expectations in Russia.

More recently the Russian central bank has been hiking rates and this has helped the ruble to the top of the table for emerging market currencies this year. Rising foreign ownership of Russian bonds and market measures of credit risk back to pre-pandemic levels are further proof of economic stability.

In the face of US-imposed financial restrictions as well as volatile energy markets, the Putin-led Russian government has responded with tighter fiscal policy. Measures like the retirement age going up were  politically unpopular but helped reduce government spending when the economy was under pressure. As the economy as adjusted, the conservative policy has remained.

Russian alliance with Saudis in OPEC+

Energy still dominates the Russian economy so oil and gas prices play a big role in the success of the stock market. International oil prices in Brent and WTI crude surpassing pre-pandemic highs is beneficial to Russia as an oil-producer. Now with their part in OPEC+, Russia has a bigger influence on their own destiny. More recently natural gas prices have been soaring, especially in Europe - a big market for Russian gas.

What are the risks to Russian stocks?

Put simply, the biggest forecastable risks are some of the supporting factors behind the rally begin to fade.

A strong USD is universally bad for emerging market currencies. Fortunately for Russia, the country has been weaning itself off dollar assets for years and the major Russian corporations have minimal US dollar-denominated debt. While a weak currency generally represents a weaker economy, a falling ruble can act as a buffer when oil prices fall.

The price of oil has gone in an almost straight line higher since the low in March 2020. Should a more durable downturn happen, this would likely weaken Russian corporate profits as well as the ruble. The chance of this happening has been reduced by Russia’s part in OPEC+ but that alliance showed its fragility when oil prices plummeted to below zero amid the brief price war began by Saudi Arabia.

Investors like investing when there is stability and for all the criticism, Putin has presided over a stable political environment. This week’s election results are testimony to the minimal risk of a shock election loss for Vladimir Putin or his allies. Still, tensions remain with the United States and after Putin’s meeting with US President Joe Biden.

It’s tricky for investors outside of Russia to invest directly into Russian stocks. There are a host of ETFs representing various baskets of Russian stocks available when investing with FlowBank. There is the choice to go both long or short. The most popular is the MSCI Russia ADR, available as an ETF or CFD.