German elections won’t affect markets as much as China will. European natural gas, carbon permits, and power rising to record levels with little signs in any letdown. Euro area surveys are deteriorating, demand is soft, consumer purchasing power is squeezed, and central banks are acting hawkish.

We know this about Germany: they produce loads of cars, technology, manufacturing and services and they’re great at it. But we’ve seen a new Germany this month with an election surprise, and a strong DAX reacting to China events. As showcased in the graphic below, Germany and Europe are relatively more exposed to China stress. This is made clear by strong movement in the V2X versus the VIX. The V2X is the European version of the volatility index VIX used in the US.

Manufacturing, and beyond China

The Euro area has seen a September flash composite PMI decline of almost 3 points MoM. We are seeing weaker manufacturing momentum reflected in national surveys which is hard for Europe and especially, Germany. Bottlenecks continue to be an issue, but the data shows less friction than before and anyway, all eyes are now on a slowing demand.

A demand slowdown keeps coming up, and that’s more of an issue in the reflation trade thesis, thus the name of this article. While bottleneck created backlogs should keep manufacturing afloat for a while, demand falling could result in a more numbing slowdown than previously expected.

European energy in the spotlight.

Gas prices are concerningly high—good for energy stockholders, not so much for households. Natural gas prices have surged rapidly, about 34.78% in the past month, jumping from $4.75 to $6.08 last week alone.

Inventories in Europe are at historically low levels for this time of the year. The FTSE 100 sees losses to a lesser degree than others as energy prices and yields keep the index oil giants and banks supported—think Shell, BP—but while sectors in Europe are mainly in the red, oil and gas shows the inverse result.

Two things about this result. First, while Qatar and US players excuse their disinterest in supplying Europe, Russia remains the safeguard of natural gas to Europe, and Gazprom is ready to discuss new gas supply contracts with bigger volumes to meet a rising European demand. Second, in order to protect citizens, there is a growing likelihood of state intervention—good news for company margins! 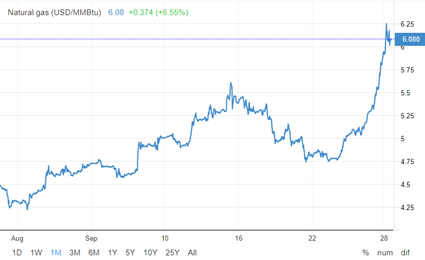 A look at European inflation

ECB leaders are mainly hawkish (rate hikers). The BoE is clearly hawkish—if all goes well, or if the BoE feels pressured by spot inflation, it could hike as soon as December and a second time next May. Persistence on volatile components of inflation will increasingly raise doubts on the future of asset purchases in Europe. Oil prices are stronger across the curve, utility prices have created a significant shock and futures for food prices have somewhat also moved up in tandem with energy costs.

In terms of jobs and wages, inflation is typically treated with rising unemployment figures—or so says Milton Friedman, and neo-classical economists. Of course, it is not as simple as this, so we turn to wages. In Europe, labor markets are still somewhat weakened with output gaps that will take some quarters to close, but the general idea is that wages should eventually normalize back to pre-covid times.

It looks unclear whether or not labor markets are ready for potential rate hikes in the coming months, but minutes from the BoE suggests more urgency, more concern about inflation, and a desire for optionality in labor markets, is itching. In other words, the odds for a November or December rate hike have risen. The BoE said it would focus on labor markets and furlough figures when making such decisions, with furlough figures coming out in December.

September PMI is not just a supply-side issue

PMI is the purchasing manager’s index. It’s an industry private sector index that managers fill out explaining their sentiment about demand. It guides investors with regards to future business conditions. We saw a flash Euro area composite PMIs decline from August, validating a trend that Europe passed its peak momentum in confidence...

Manufacturing PMIs are at their lowest levels since January and service PMIs are at a 4-month low point. In other words, demand in the near and medium term is not looking grandiose. The fall in September PMIs actually confirms that supply side constraints remain at play, keeping bottlenecks at the top of European production ‘’list of hassles’’, but September’s increase in stockpiling reveals a weakening demand for the month. There are worries that we now have moved to both supply and demand side issues with inflows of orders not rising quickly enough, and the same is true of exports.

Two things of note; First, supply side constraints improving could equate to upside risks, i.e., an uncertain possibility of gains, in production. With low demand like we’re seeing now however, those upside risks would probably by limited. Second, there are valid concerns that the demand deficit accrued during the covid crisis may fail to be fully recoup in this next recovery phase thus adding pressure on labor markets (less consumption, less work).

At least there’s a positive virus outlook in Europe

So far, so good. Infection dynamics are slowing across European’s nations, and covid-related deaths are quite low. The European Medicines Agency should be deciding on vaccine boosters in early October, but some member states have begun already. Hospital stress remains under control with vaccination rates in France, Spain, and Italy now all north of 70% (first dose).