700 newly added tickers to American public exchanges, $100B raised in Q1 2021 alone. While these records are challenging even those of 1996, sometimes, more is actually less.

How did IPOs perform?

We witnessed a record $500 billion of liquid value originating from IPOs this year, but IPOs did not perform this year. The majority of 2021 IPOs actually struggled to repeat the performance seen in 2020 with 60% of 2021 IPOs now trading below their IPO debut prices. Sometimes, unlocking value and seeing high returns on public markets don’t exactly go hand in hand.

During this year’s IPOs, the climate was not as welcoming as originally suspected coming out of 2020. But this poor form should come as little surprise considering fears surrounding rate hikes, and Covid variants.

The first graph shows an index of IPOs struggling to find a direction after falling from a February ramp up. While long-term returns have actually trended upwards for IPOs historically, Delta, Omicron, and the Fed have created a situation that could indicate a lower level of IPOs in the coming years. 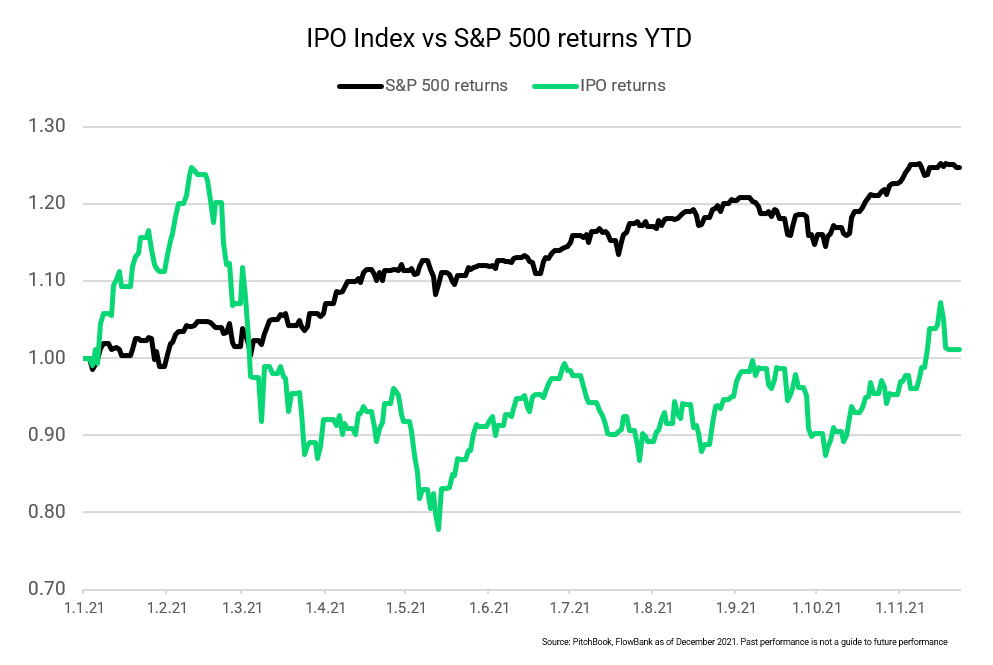 Between the Nasdaq and the NYSE, we saw 952 deals this year, with the Nasdaq taking the lion’s share at 686. High growth companies stood out the most in terms of overall returns with as an example, Upstart who gained 938% with a 245% revenue growth expectation in 2021. Then, we saw a big ESG-hyped roadshow with Rivian, Allbirds, and Rent the Runway, and of course lots of SPACs…

More specifically, the trend around high growth stocks that address ‘’open-ended’’ TAMs, i.e. those that successfully disrupt large legacy markets, tell investors promising stories about future cashflows and profitability, mainly through their potential to generate economies of scale. Such examples included Global-E online (+144%), Confluent (+122%) and Monday.com (+118%).
Companies with direct listings stood out with examples like Roblox (+79%), and ZipRecruiter (+43%). As did retail IPOs, which performed against the S&P 500, and are now up 27% on average with On Holding AG and Warby Parker as main examples.

No earnings, no problems?

A record proportion of IPOs today are not making profits. In fact, many have no sales, no EBITDA. In Biotech, about half of IPOs have no revenues. But the reasons for this may be related to non-industry specific factors. Investors are now more confident in the power of digital transformation and innovation, creating ‘’open-ended’’ total addressable markets i.e. when software disrupts things like biotech and finance. IPOs are no longer seen as a way to raise funds at a later point in a company’s life, but instead as a way to raise cash sooner, so we could be at the onset of a new normal.

But has this new normal translated into better market performance? Not really. IPOs (excluding SPACs for now) have underperformed YTD relative to history. While we know that historically US IPO performance tends to fall over the long term, the short and medium term tend to be strong. But this was not the case this year. Median absolute IPO performance over the past 6 months was -13% when the historical median since 2008 is +15%.

SPAC have been boosted by cheap money, pushing the total amount of all IPOs to highs last seen in 1996 (see graph). While SPACs have represented a disproportionate share of US IPOs this year — nearly 60% —90% of them had negative earnings.

The reason for this surge according to Klausner, Ruan and Ohlrogge of Stanford and NYU, is that SPACs simply became a more lucrative venture for investors. The most recent cohort of SPACs, saw fewer redemptions, tended to issue fewer warrants, and attracted more capital from institutional investors — these elements contributed to the hype, leading to a critical mass of SPAC interest, and therefore, quick short-term gains. With that said however, SPACs have actually underperformed the S&P 500 by 20 percentage points.

SPACs still present a risk because they have proliferated in a market awash with liquidity and where investors are looking for quick returns. While they have enabled companies to enter public markets at a lower cost, and have allowed retail investors to access private markets, many SPACs are yet to announce their target company.

Furthermore, retail investors are not the main owners of SPACs, something not well advertised. It is institutional and hedge fund managers who own a median 85% of all SPAC shares before they even hit public markets. 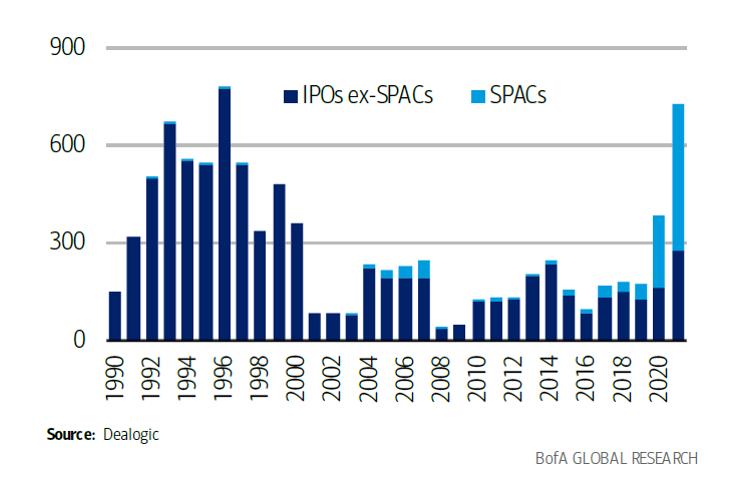 Year to date, IPO performance was weak as showcased by the IPO index above. The index underperformed the S&P 500, and while there were standout performers like Upstart, the threat of rising interest rates has made it harder for many companies. SPACs were the most popular way to go public because of the cheap money market that enabled firms to debut faster and more cheaply. 60% of IPO and 90% of SPACs reported little to no revenues, and companies are going public at earlier stages of their lifecycle than ever before. The why behind all this activity is both attributed to liquidity, and more rewarding SPAC economics for institutional investors. This year set a lot of records, but not in terms of returns your money was better invested elsewhere, at least on average.