Divide to conquer with conglomerate divorces

Running large, diversified conglomerate companies may become a thing of the past. Splits and spin-offs are allowing large firms to better focus on single markets, and now, more and more businesses are doing it.

Johnson & Johnson (ticker: JNJ), the 135-year-old personal care and home goods firm known for developing the Band-Aid, announced on November 12th that it plans to split into two separate publicly traded companies. This is the latest in a long list of conglomerates announcing a corporate break-up.
JNJ will spin off its consumer products division, and keep its pharma and medical devices division together. The move comes as an attempt to keep pharma-related profit margins intact, as the firm grapples with lawsuits related to the opioid epidemic and the Covid-19 vaccine.

The new Johnson companies would both be quite large, as revenues from either segment represent billions in cash flow. The smaller consumer revenue segment is estimated to generate $15.4B in 2022 which is as much as what Mastercard, for comparison, generated in 2021. In JNJ’s case the end result would help their healthcare side prosper, by dropping the reputational baggage that the consumer side carries around talcum and opioids lawsuits.

Executives at JNJ however discredited legal challenges as the driving force behind the split, saying the split had been in the pipeline for quite some time, and that changing pandemic-led consumer patterns have presented management with an opportune window. 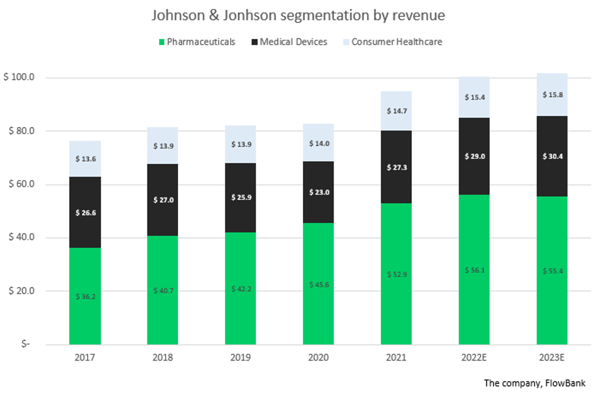 For mature companies, with almost fully discounted stock prices, a breakup can lead to improved stock gains. Considering JNJ is only up 5.44% this year, against Pfizer’s 36%, executives think pharma business is a better place to be right now. Indeed, in the past 6 months, the health care sector was up 10.01% versus 4.07% for consumer staples.

History suggests that in the big pharma business, splitting does not always spur on investor confidence. In fact, recent times have shown that investors are slow to buy into spin-offs. The first graph below shows Viatris, which since spinning out of Pfizer, has fallen 25% YTD and underperformed generally as its own stock. The second graph shows Merck's spinoff, Organon, which has moved sideways since going public.

If an independent JNJ consumer company can unlock the sort of value seen at say, Procter & Gamble, then that is a good enough reason to be behind the spin-off. However, the consumer side spin-off would not be able to automatically erase the current legal problems JNJ faces with the talcum bankruptcy which is, regardless of what management says, a strategic liability.

An independent pharma/medical JNJ company can risk bringing unwanted attention to other problems, mainly around their patent expirations. On the bright side, JNJ’s patent expirations are not the ticking bombs seen at Pfizer and Merck, but in an isolated case, the problem would only resonate a louder echo during investor roundtables as it becomes an independent pharma business.

Small is the new big

In 2014, Merck sold its consumer-health businesses to Bayer and then to Procter & Gamble as a push towards freeing up capital to develop more profitable areas in drug making. In 2020, Vontier completed a separation from Fortive and launched it as a public company. Finally, in 2021, others caught the bug—Novartis says it could list Sandoz, GlaxoSmithKline says it plans to spin-off its consumer health division, and now Johnson & Johnson.

But big pharma is not the only industry undergoing this sort of corporate restricting trend. More recently, General Electric (GE), Toshiba, CHN Industrial and Daimler all announced potential spin-offs and splits. They follow in the footsteps of ABB, Siemens, DowDuPont in distancing themselves from what appears to be a thing of the past: large, diversified conglomerates. GE slimming down could prompt other firms, such as 3M, Eaton, and Emerson, to follow suit.

The rationale is that more specialized business units with greater focus, tailored capital allocation and strategic flexibility could be the way for mature firms to continue growing.

Spin-offs can take between 18 and 24 months to materialize, so why are so many conglomerates breaking up right now?

Take GE as an example, which announced a triple split on November 9th. GE said it will only spin-off its healthcare division by 2023 and then its energy division later in 2024. Spin-off announcements tend to be a material disclosure for debt investors because when a company restructures, it often times seeks out new capital.

On the equity side, as mature companies feel the pressure of old age, signaling pending spin-offs can be viewed as a catalyst moving valuations north. Lastly, a spin-off would put GE’s aviation division on track to exceed pre-pandemic levels, assuming a travel recovery, which would lift earnings estimates revisions for GE shares. In simpler terms, it’s good for stock performance.

Spin-offs can work on investor psychology, and although we wouldn’t see a material jump in share price until after the re-structuring is finalized, breaking up units is a promise to investors to beat past results. Spin offs could be the answer to the following question: how will firms beat pandemic era earnings going forward?

Finally, it’s also about taxes. The IRS in the United States has recently been revising regulatory frameworks around tax-free spin-offs so by applying for a ‘’private letter’’ ruling right now, company requests would fall under existing regulations. In other words, conglomerates want to spin off to grow, and it’s cheaper to do it now, so everyone jumps on the train.