DAOs could well replace companies one day, maybe even jobs as we know them. But what exactly are these DAO ''communities'', and how far along are we in DAO developments?

Not quite, but if there is one word to describe what a decentralized autonomous organization (DAO) is, it should be ‘’community’’. DAOs are blueprints for how multiple parties can coordinate and move towards a shared goal. They are blockchain-based mechanisms that can replace agents, such as humans, to streamline community-voted outcomes.

The following market map shows us just how much energy has been spent in developing DAOs over the past year. We have seen many such ‘’communities’’ spawn that focus on investing-related DAOs, art-related DAOs, social-media DAOs, and service-economy DAOs. We wrote about MakerDAO the first ‘’de-central’’ bank, which built an automated lending protocol which you can read more about here. Friends With Benefits (FWB), have enabled engineers to join forces to build protocols and tools that other DAOs may use, and Yearn, Syndicate, Uniswap and Aave have become world famous. 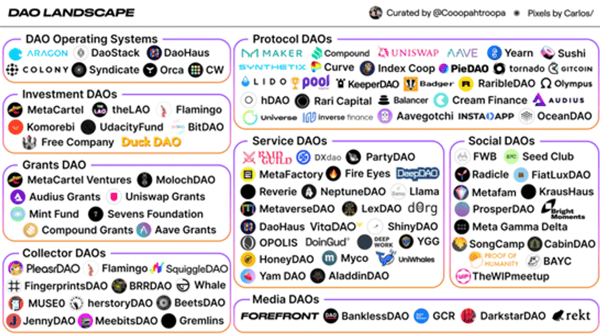 The next frontier in computing could be building apps collaboratively on programmable blockchains. DAO’s entirely new method by which to organize communities and share resources has the potential to spur innovation like no other business model out there because DAOs enable bottom-up innovation.

Apps can now take on an entirely new value systems where builders make things that evolve over time, and that are shaped by their community directly. Members of DAOs are stakeholders and get to vote on the direction of a project: everyone contributes. And people can belong to multiple DAOs at once.

The saying that 85% of jobs that will exist in 2030 haven’t been invented yet (according to Dell and the Institute For The Future) is only further highlighted by the sort of value DAOs can unlock. Much like the forces that brought passionate engineers together during the 1970s to develop computers, the internet, and applications, DAOs are helping organize today’s communities of engineers to build web3.

Until recently, DAOs were used mostly to secure DeFi protocols and the members who knew about them consisted primarily of highly trained technical developers. However, today’s hubs like Friends with Benefits (FWB) have opened up an entirely new dimension to gather creatives to start piecing together the future of internet.

Now, DAOs are becoming essential Lego pieces to the IRL (in real life) metaverse efforts that are starting to spur up. It is possible that the next generation of teenagers will actively participate in the governance of this new world—they’ll pay for concert tickets with native crypto currencies and be involved in the mainstream adoption of web3 through their favored DAO.

Are DAOs fundamentally different from a regular LLC?
Are DAOs really that special? Yes and no.

No, because corporate governance structures already work in most cases. The fact is that most people like making decisions in a board room format so why fix something that is not broken?
Yes, because DAOs are super-national systems which means that problems around corrupt external systems can be addressed more quickly. Sometimes, the people who like making decisions in a board room format, may disagree with the very people they serve (a client, consumer, or patient). Think therefore of DAOs as great equalizers whereby teams and communities become one and the same so there are no agency dilemmas.

A recuring theme in decentralized finance is this idea of ruler-less societies, but this is not exactly the case with DAOs. There are benefits to flatter hierarchies in things like tech startups, but there are also laws of logic driving us to accept certain hierarchies. Things like complex legal entities might actually need rigid structures in order to function properly—a senior counsel may know more than a junior attorney, and that’s ok, so be it.

But DAO developers know this! What’s different with DAO-style leadership is that while the token-holding community makes decisions like any other protocol, there will still be a need for rigid structure—in the case of Yearn, a staking protocol, the founder says its leadership style is about knowing what to do next, which means the leader changes based on knowledge, and not on other metrics.

Just DAO it?
We are still talking about a type of invention that is in a state of infancy—or at least in an engineering phase that is only well understood by some, and accessed by an highly skilled group of users. In the case of FWB, entry is based on a selective process. This implies that DAOs are actually hard to become a part of. While there are efforts to ‘’democratize’’ DAOs, it seems misaligned with the desired outcome because quality community and Facebook-like engagement are diametrically opposed.

It seems as though what DAOs want is self-impeding to scale because ownership of a DAO token is a necessary step that might not appeal to the masses. How can you therefore expect a large market if the gate is so narrow? While DAOs could spur lots of innovation in areas like the creator economy, to this day, its a world made up of technocrats. For example, A16z-backed FWB requires an application and a large stakeholding position (expensive membership fee).

On the bright side, if one is selected to join a given DAO community, it does appear as though the climate of creativity, collaboration, and trust is of a high quality. The collaborative nature of DAOs, despite their hint of elitism, could well be a solution to group think and competitive cutthroat cultures that are perceived to be holding back innovation in Big Tech today.

At the end of the day, DAOs are positioning themselves as the key organizational motor for the metaverse, creator economy, and future freelance workers.