European liquid natural gas (LNG) prices are back at record highs over the threat of supply disruptions from Russia as the country sabre rattles with Ukraine and NATO.

UK natural gas futures and Dutch LNG futures, which are the most liquid contracts for trading in Europe, are up in the region of 900% and 700% respectively year-to-date.

What’s been happening to LNG prices?

Beginning mid-year of 2021, European natural gas prices began to trend higher as demand offset supply during the reopening. Then as it became clear that supply chain disruptions would get worse, European energy prices from LNG to crude oil turned parabolic in September in anticipation of higher demand during winter. As winter came, prices gave back half of their annual gains. But by November, rising tensions between Russia and Ukraine started threatening the supply of Russian gas through pipelines in Ukraine to European markets. 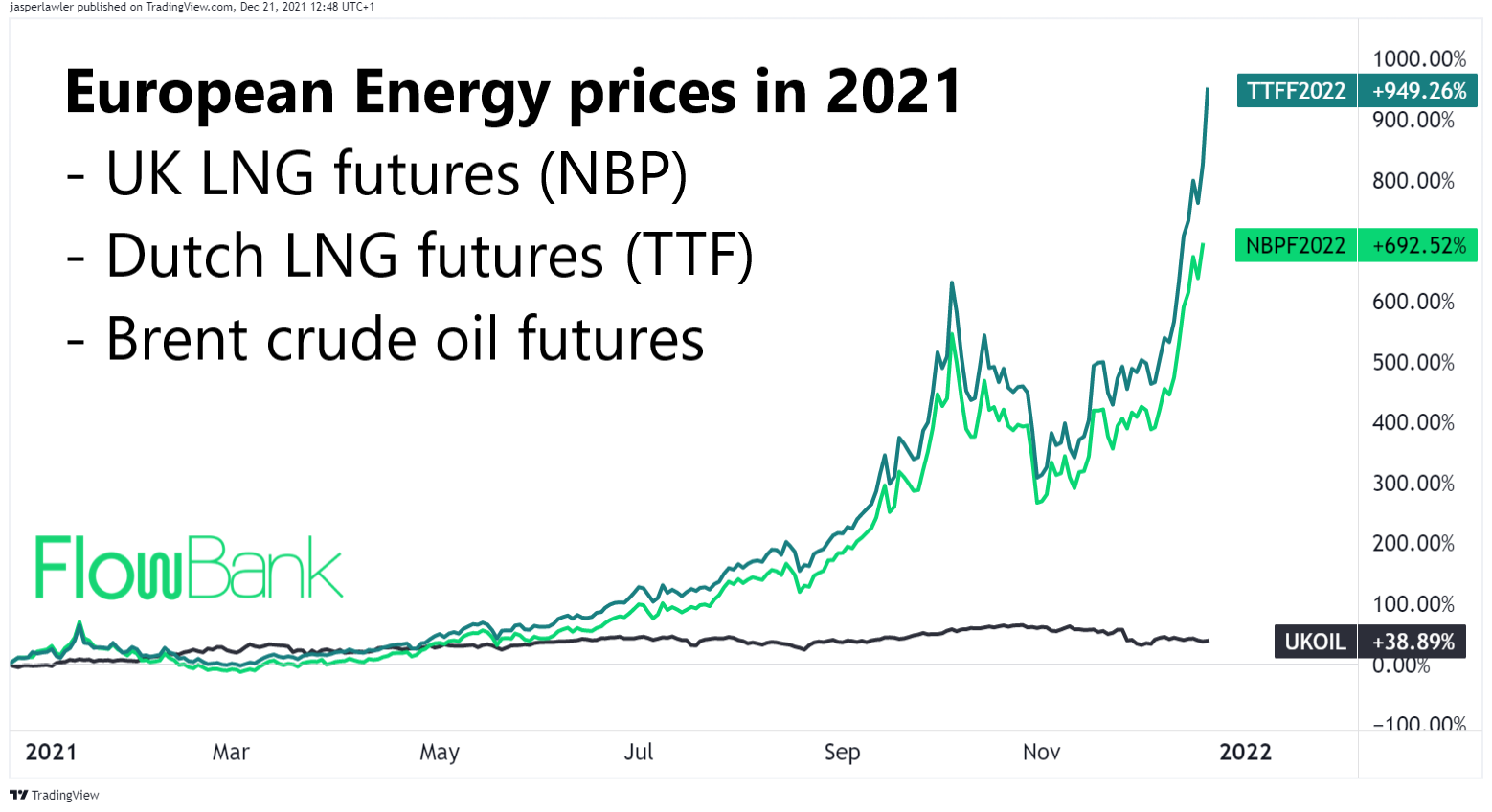 A divergence from oil

New COVID-19 restrictions continue to weigh on oil demand estimates and demand concerns have been borne out by the US rig count rising to levels last seen in April 2020. Put together with rising supply from OPEC+ and the price of oil has come off significantly in the past few weeks.

For now, the idea that took hold in September, that crude oil would be used as a replacement source of energy for high-priced natural gas has been outweighed by Omicron and its economic implications, leaving global oil and European natural gas prices to diverge.

Power prices are rising too

The high natural gas prices have become something of a self-fulfilling prophecy. As LNG prices rise, other energy infrastructure is put under pressure and is in some cases failing. This is pushing overall power prices higher in Europe too. On Tuesday the price of power in France rose to its highest since 2009, while in Spain it hit a record high according to Bloomberg. 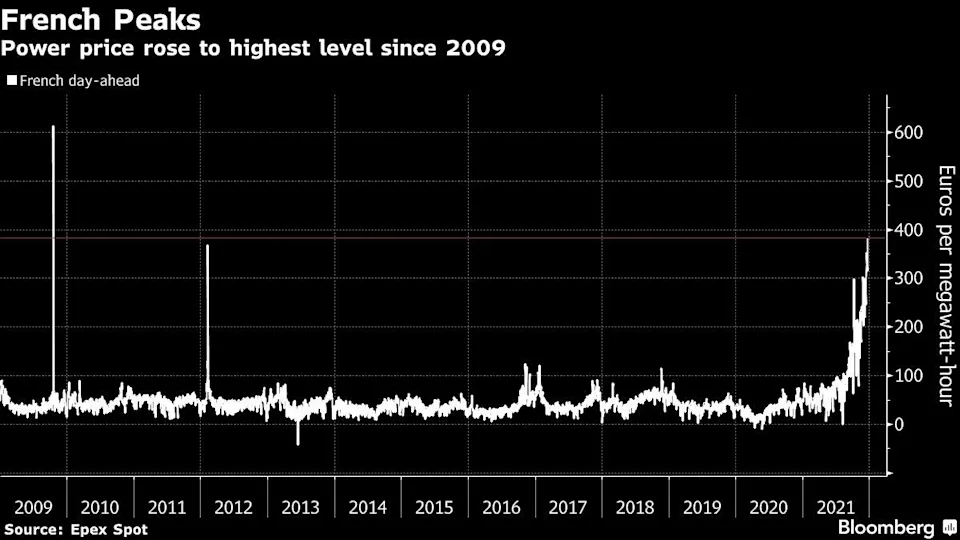 Why are European LNG prices going up?

It’s worth noting that high gas prices are not a global phenomenon. US natural gas prices are at the lowest in months with the US so far experiencing quite a mild winter, keeping a lid on expected heating demand. However the trigger was global. A sudden pickup in demand for LNG especially from Asia when economies reopened in 2020 left Europe with low stockpiles ahead of winter in 2021.

Europe gets about 35% of its gas supply from Gazprom, Russia’s national energy company. However sanctions on Russia imposed by the European Union have led to little interest from Russia in exceeding its contractual obligations for LNG supplies to Europe.

A NATO and Russian troops buildup on the border between Russia and Easter Ukraine is increasing tensions between the two countries and has put the approval of Nord Stream 2 pipeline at risk, raising doubts whether Europe’s current and future energy needs can be met without coal and nuclear power.

LNG prices tend to have seasonal peaks and troughs reflecting expected demand during cold weather periods. Naturally, if colder than usual weather is experienced, natural gas prices tend to rise with the higher demand for gas to heat homes and workplaces.

Temperatures are forecast to fall below zero degrees Celsius in many European capitals this week, as will happen almost every year in the final weeks of December. This is typically met with extra demand as people travel, shop and host family and friends over the holidays. Under normal circumstances this would not strain the system but this year is extraordinary.

Another aspect of the weather that ties directly into the price of alternative energy was the wind.

The energy output from wind in Germany has fallen below 5,000 megawatts, compared with a record high over 47,000 megawatts set on Nov. 30, according to Bloomberg. Low wind levels across Europe will increase demand for gas and coal, putting extra upwards pressure on prices.

Nuclear power plant outages especially in France have exacerbated the shortage of sources for energy.

A more controversial potential cause of Europe’s increasing dependence on natural gas (largely from Russia) is the closure of coal power plants in order to meet climate change goals. As of March 2021, 162 of Europe’s 324 coal plants have closed, halfway towards the UN 2030 Agenda to retire all coal plants on the continent by 2030 at the latest.

Renewable energy is still unreliable and battery technology is not yet up to the task on storing the energy produced from wind and solar. That leaves Europe and other countries that pursue similar climate objectives open to greater volatility in energy prices.

Some energy producers have already started turning to coal as a backstop to the energy crisis. The price of coal has risen alongside LNG, as has the cost of carbon offsets, which have been hitting records alongside the demand for more polluting sources of energy. 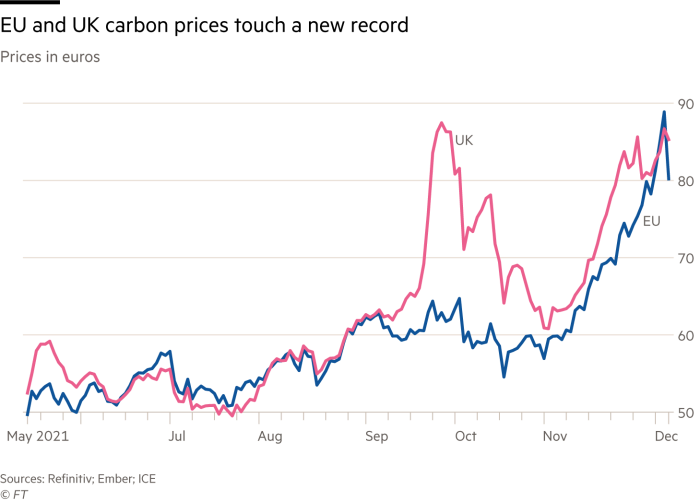 The low gas stockpiles in Europe that have resulted from toxic mix of geopolitics, supply chain bottlenecks, weather and climate policy will have a knock on effect for 2022 and potentially beyond, suggesting that while LNG prices are likely to come off their highs near term, Europe’s energy crisis could be around for a while yet.