GBP Outlook: How Far Will the BOE Really Go?

GBP/USD has rebounded off a one-year low, powered by short-covering in the British pound after a surprise Bank of England rate hike in December. But will the Omicron covid variant and PM Boris Johnson scandals put a crimp in the rise?

Things are getting interesting for UK assets, including the British pound...

The story for the British pound

The surprise move to hike rates against a consensus view that it would come later in February 2022 owed to a spike in UK consumer price inflation to 5.1% y/y in November, its highest in over a decade.

The move higher in benchmark UK rates looks necessary to contain the rising inflation but the timing might be ill-suited to other aspects of the economy - not to mention political stability. Restrictions around the new Omicron variant stand to dent economic growth, while scandals in Boris Johnson’s government are adding to geopolitical uncertainty already present since Brexit.

After a rapid ascent in 2020, GBP/USD double-topped in early 2021 and spent most of the year consolidating above 1.35. In November the price made a material break lower to fall under 1.32 but has rebounded in the past two weeks. 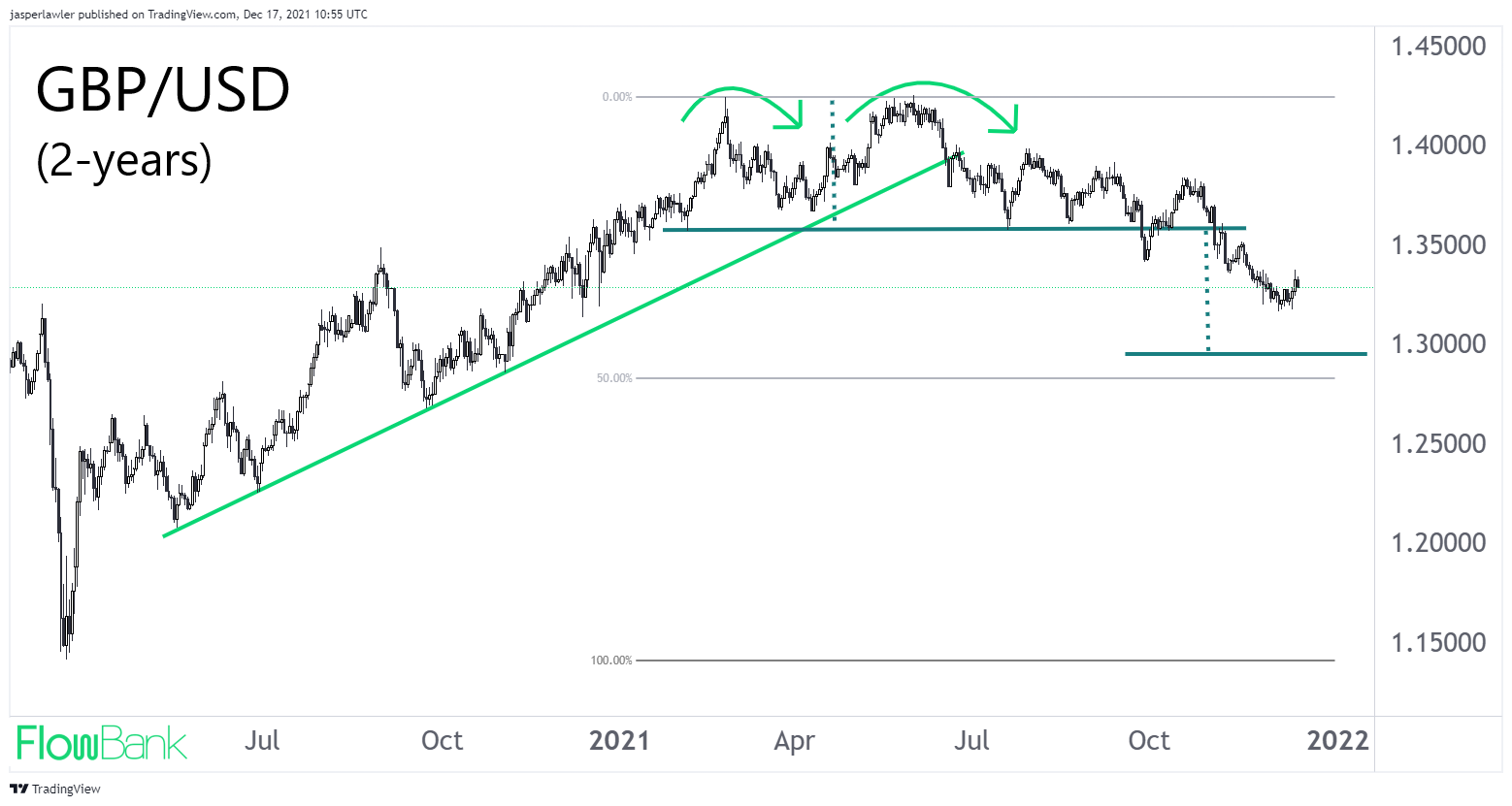 Longer term, the decline in 2020 looks like a pullback of the rally in 2020. Nearer term the currency pair is in a downtrend. Using a price objective from the height of the double top pattern would imply a further move lower under 1.30. A 50% correction of the 2020 rally would take the price down to 1.283.

It has emerged that maskless parties were taking place at No. 10 Downing Street, the home of the Prime Minister and centre of government in the midst of the tightest lockdown restrictions around Christmas 2020. The open and obvious hypocrisy of a government that is now introducing tighter restrictions again this Christmas is adding to geopolitical uncertainty around the UK.

Over 100 backbench MPs demonstrated their distaste for both the behaviour of the government and for new covid rules, including the use of covid passports to enter large indoor venues, with the second biggest rebellion since Theresa May’s disastrous first Brexit deal.

The UK and Omicron

London as an international hub naturally tends to be one of the first places to pick up any new covid-19 variant, which then spreads to the rest of the country. The data so far on the Omicron variant is that it is very transmissible but hopefully is less virulent.

Critics would argue the new lockdown measures are intended as a distraction from scandals in Johnson’s government. Those in favour suggest it is necessary to contain the spread while the nation takes up vaccine booster shots. Whatever the motivation, tighter restrictions are likely to crimp the UK economic recovery - just as the Bank of England makes the cost of borrowing higher.

The Fed and other central banks

All else excluded, higher UK interest rates are bullish for the British pound as currency traders seek out carry trades in yield-starved global markets. But although the Bank of England was first to lift rates among the ‘Big 4’ - they all appear to be heading in the same direction. 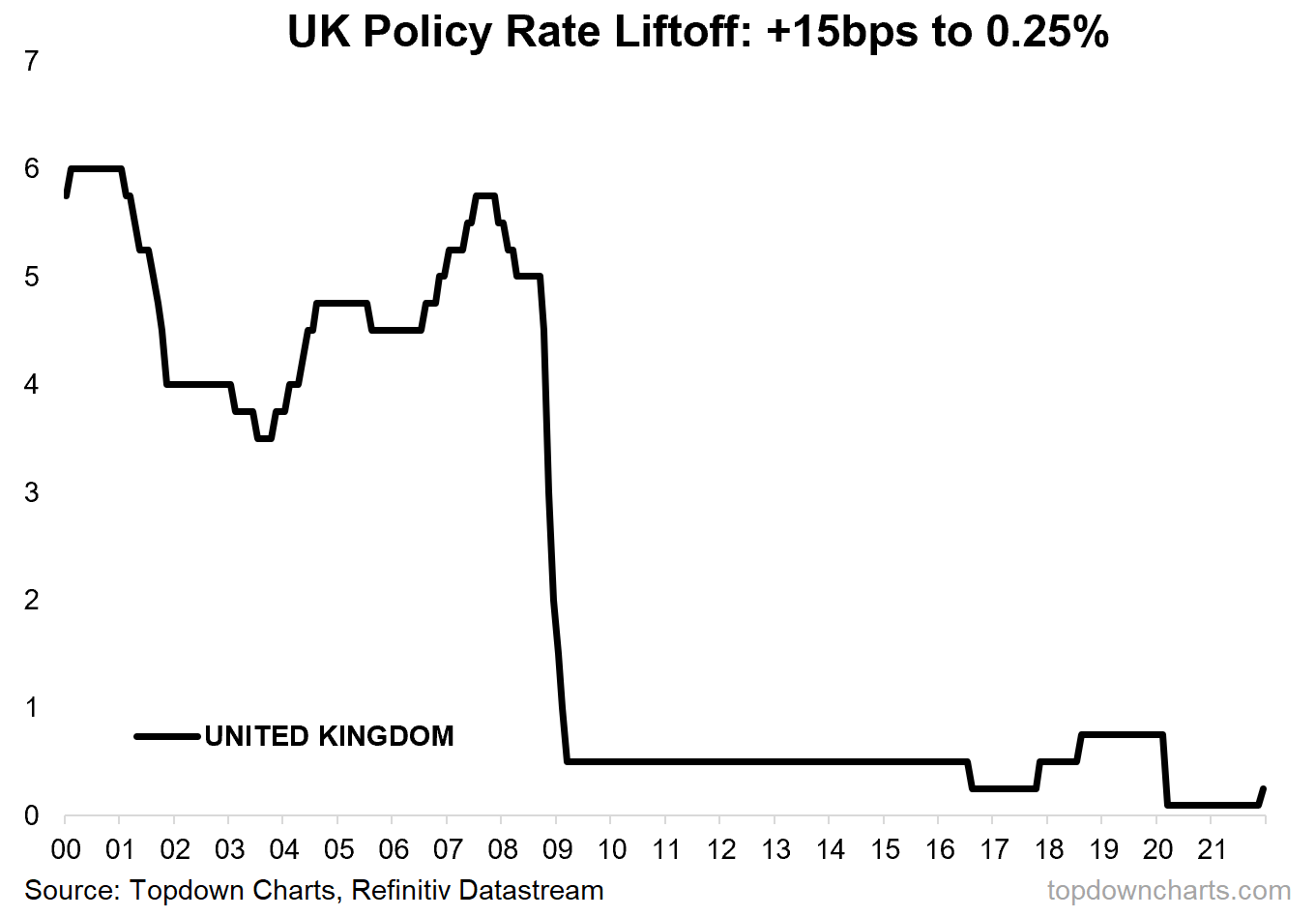 In the same week, the Federal Reserve sped up its pace of tapering - a so-called ‘turbo taper’ from $15 billion per month to $30 billion. That means QE will be done by H1 2022, leaving room for a projected three US rate hikes in 2022.

The euro gained alongside the British pound this week after the European central bank signaled its own exit from pandemic-era stimulus in March, though ECB President LaGarde has been quite explicit about expecting no rate hikes in the Eurozone in 2022.

Looking out to other global central banks, Costa Rica lifted rates +50bps to 1.25% and benchmark rates in Norway just rose +25bps to 0.50% this week. According to Topdown Charts, there have been 115 global interest rate hikes this year. The UK is certainly not the only country raising rates.

What’s next for Sterling?

After several weeks of selling the pound before and after the announcement of a hawkish policy pivot from the Federal Reserve, its possible the decision by the Bank of England to lift rates can offer some further relief to the Sterling in the near term as GBP/USD finds a base at 1.32.

The risk for bulls is that any gains might be short-lived if it starts to become evident that the Bank of England cannot move much further on rates. If the BOE’s rate hike starts to look like a ‘one and done’ type scenario, other central banks, including the Fed can quickly catch up and overtake.

Even if the Bank of England does press ahead with further rate increases to pull down inflation (and inflation expectations), forex traders might just continue to stay clear of the pound, as they have done since 2016, because of the geopolitical uncertainty, exacerbated by BoJos parties!