Rivian: the power of hope

Rivian Automative's IPO marked the biggest IPO of 2021, turning the dynamics of the automotive industry on its head. The Jeff Bezos-backed electric carmaker has only sold 156 cars so far, but has managed to raise over $11 billion in the stock market, briefly valuing the company at over $100 billion. As such, Rivian is already worth more than automotive giants such as Ford and GM. Is the start-up worth them?

Biggest IPO of the year

Rivian made an impressive debut on the Nasdaq on Wednesday. Its IPO was the largest of the year and the sixth largest in US IPO history.

The pre-IPO valuation suggested that the IPO price would be around $60 per share, and eventually the initial price was raised to $78, jumping 53% to nearly $120 in the first few hours of trading. The company was worth over $100 billion at its peak. Rivian closed the first day above the $100 mark, equivalent to a valuation of $88 billion.
Figure 1: Rivian share price 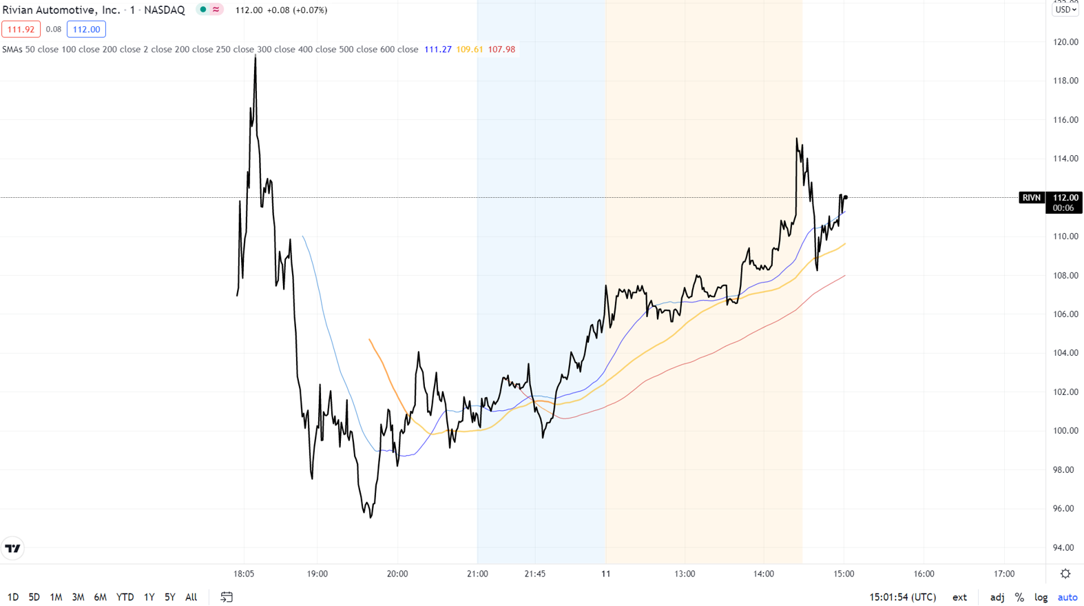 But Rivian only sold 156 cars! Yes, you read that right. Rivian started shipping cars last September and has sold 156 cars to date. That's a laughable figure compared to Ford who have sold an average of 1,000 each month this year, and it clearly wasn't the best year for Ford due to the chip shortage and the pandemic slowdown.
Figure 2: Ford sales 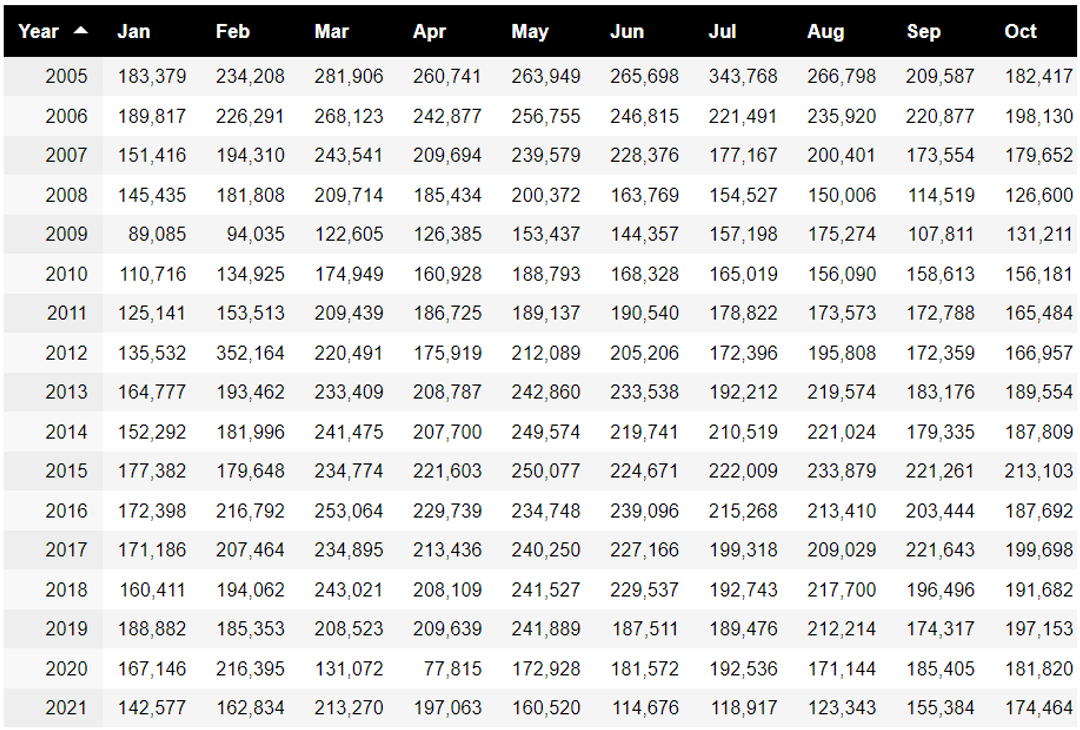 For its part, Rivian says it has 55,000 pre-orders for its trucks and SUVs. We also know that Amazon, which owns nearly 20% of the company, will add 100,000 Rivian vehicles to its fleet by the end of 2025. But at this point, no one can guarantee that Rivian has a sustainable business or that there will be sustained demand for its electric vehicles. And the competition is fierce.

Ford, for example, is not twiddling its thumbs: pre-orders for its electric F-150 trucks are exploding; reservations have exceeded 160,000 and will continue to grow until next spring, when the F-150 Lightning goes on sale. Pre-orders are already triple those of Rivian.

Volkswagen, General Motors, Toyota, Honda are all in the electrification race: all want a share of this growing market, not to mention the giant Tesla, and the Chinese competition Nio and BYD, supported by the famous investor Warren Buffet.

What makes Rivian so appetising?

Rivian has yet to record significant revenues, and clearly not profits. In October, the company revealed losses of $1.4 billion over 2019 and 2020, followed by a $2.5 billion loan, and a net loss of $994 million in the first half of 2021 alone. So it's not the accounting performance that makes Rivian so palatable.

However, we know that initial losses are not serious for a start-up. Tesla, for example, raised $226 million at its IPO in 2010 and only reached a full year of profitability this year - over a decade later.
Any investor knows that Rivian's stock market valuation is not representative of the company's fundamentals. Rather, the reason for the crazy valuation is that investors are looking for the next electric vehicle manufacturer to replicate Tesla's success. Therefore, a very large part of Rivian's valuation is a bet for the future, and the hope that it has unearthed a new gem.

Amazon invested $700 million in the company and ordered 100,000 vehicles. This deal showed that Jeff Bezos wants to challenge Elon Musk not only in space but also on earth, via the electric vehicle race. Time will show if Rivian can catch up with Tesla. For now, Rivian is far behind the leader, which has already sold almost 2 million cars since 2016.
Figure 3: Number of Tesla vehicles delivered worldwide from Q1 2016 to Q3 2021 (in 1,000 units) 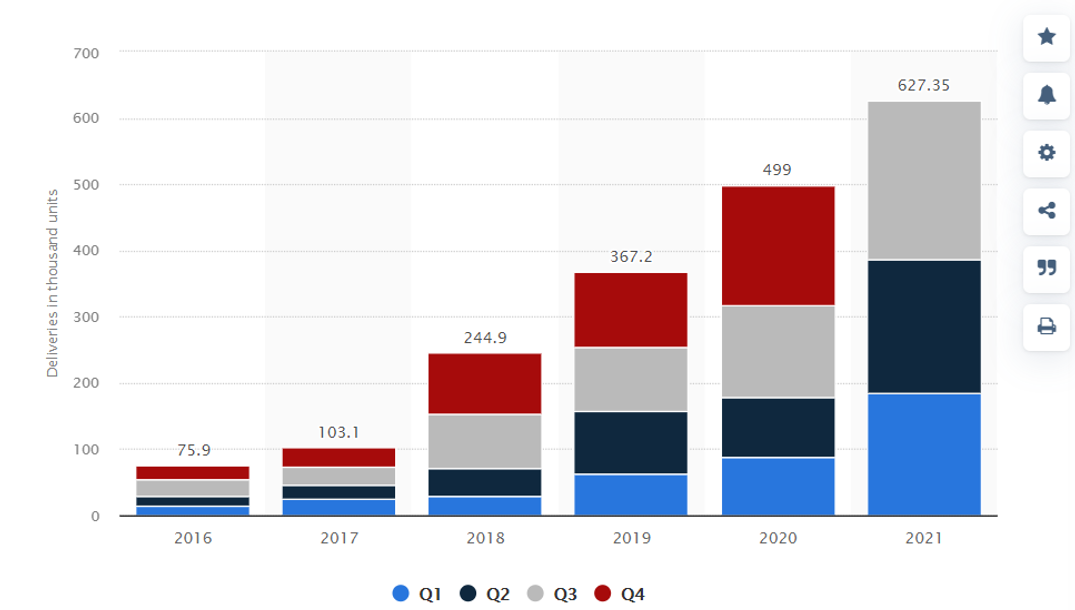 Is being backed by big names enough?

Rivian certainly has an advantage; it is backed by some very big names such as Ford and Amazon. Other investors include Blackrock, Soros Fund Management, T Rowe Price and Fidelity. But history warns that being backed by the best is not necessarily a guarantee of quality and sustainability.
We all remember Theranos, which was backed by the best and ended up being a scam with billions of dollars lost.

The electric vehicle sector will certainly be on the rise over the next decade due to a rapid shift from fossil fuel vehicles to electric vehicles. The sector therefore offers an attractive beta for investors. However, choosing promising companies will be the real challenge of the EV race.
Certainly, the market environment is not ideal for growing at the rate expected. Global chip shortages, supply chain issues, increasingly fierce competition and rising inflation are just some of the factors the start-up will have to deal with. It remains to be seen whether Rivian could be as agile as Tesla.