The only clear Paytm direction is down

Paytm, which owned by One97 Communications, is India’s second largest payment player. Paytm is better known as its own digital payment platform, which allows for transfers of cash into and from its integrated wallet via its online bank. It competes with Google Pay and PhonePe, ranking third.

When Paytm was launched in 2010, it first operated as a pre-paid mobile platform. As mobile access improved, so did Paytm’s suite of products. Today, Paytm has expanded its product offering to operate a payments gateway, a marketplace, ticket booking and both insurance and digital gold products.

Paytm’s IPO also came during a time when the pandemic fueled India’s digital economy—stock market investors are hungry for tech IPOs, so Paytm decided to follow in the footsteps of Zomato’s $1.3B IPO earlier this year.

The IPO proceeds will be used to better compete with Google Pay and PhonePe by attracting new merchants and expanding partnerships and acquisitions. However, the sound of today’s opening bell – which saw Paytm raise $2.47B — was followed by the clap of a crashing wave: shares sank 26%.

Paytm in many ways is closely tied to India’s macro story, drawing on the growth of online commerce in India, as well as the willingness and need of consumers to use mobile payments. India’s specific reliance on mobiles, often their only device, has created a hub for mobile payment and online commerce players. Since mobile cellular subscriptions really started to surge in 2002, India replaced took over Europe. By 2010, India officially became the second largest mobile phone market. Today, it commands 30% of the world’s market as illustrated on the right side:

Moreover, mobile payments have been growing at a faster pace than cards in India something that sheds light on Paytm’s business model. This comes after India’s United Payment Interface (UPI) launched in 2016, which greatly facilitated inter-bank P2P, and P2M (person to merchant) evolution. Since then, Paytm has used its growing number of users to launch into almost every online activity. For example, they even launched Paytm Gold, which allows users to buy any quantity of gold with fiat currencies—something unique to the Indian market and Paytm’s business model.

Indian mobile phone CAGR is remarkable: using the formula CAGR = (end/start)1/n – 1), the CAGR from 2002 to 2020 was 28.30%. The Indian mobile market is expected to increase five-fold in the next five years as smartphone penetration skyrockets. In 2020, mobile payments rose 67% to $478 billion according to a recent Market Intelligence analysis. Right now, Paytm is the dominant market player in all things P2M with a 50% market share across all online payment modes, and it will be looking to deepen this position over time.

Paytm by the numbers

Paytm has been doing a great job at bringing users on board and growing their GMV (gross merchandise volume)—its main focus is merchants and not over consumers, at least for now. Their GMV has blown up since 2017, but revenues have completely stagnated since 2018. This has led to a tumbling take rate – the percentage of revenues Paytm gets to keep for itself after all expenses are paid – from a decent 2.18% to a poor 0.79%. This is the weakest link of Paytm’s business metrics, but it can improve over time.

The company has prioritized users and transaction growth over income, which makes sense in the face of incumbent competition. As the firm matures though, there should be even more economies of scale that will prop up operating margins. It is therefore entirely possible for Paytm to become a successful cash cow, but for now, this scenario seems far off, unless of course take rates reverse direction soon. 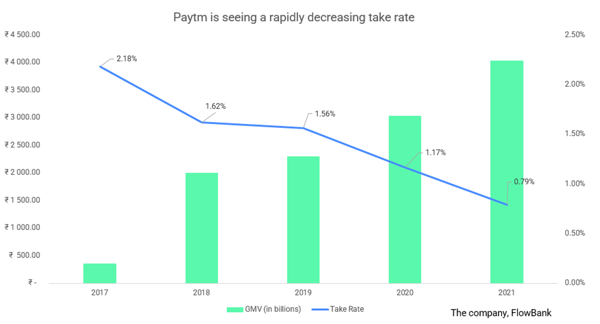 A peer group analysis indicates that Paytm is losing money relative to peers, and that it has a comparative advantage in point of sale (POS) because of its P2M positioning. Regarding financials; among peers, Paytm is the only player with a negative operating margin (-48.98%) and a take rate below 1%. GMV far surpasses other high growth groups however, but Paytm doesn’t manage this volume well enough to successfully convert revenues into profit.

With regards to POS; Paytm handles 14.7% of payments made via the UPI system, putting it third in line behind PhonePe’s 33.7% and Google Pay’s 45% share. In order grow more, Paytm will need to add more services for both consumers and merchants and let in some more risk exposure.

Encouragingly, Paytm has strong backing: Ant Group (30%), Softbank (18%), and Alibaba (7%) are all investors. This is good, because the odds of financing getting pulled are quite low, usually because top investors tend to have enough cash to re-invest.

As a standalone business, Paytm has a lot going for it. It has a major grip on all things related to merchant payments in India and despite competing against powerhouses like Google Pay, it is generating impressive GMV and it is the third biggest payment player in the India. It also benefits from what will surely continue to be an explosion in the Indian payment space. Its IPO proceeds of $2.47B will enable Paytm to invest heavily in product diversification, away from merchant and into consumer payments. However, today’s 26% slip might not surprise many. Paytm is a cash losing machine. It keeps only a tiny share of its revenues and as of now, it seems to have a big hill to climb to warrant a higher share price.