Rising bond yields and EUR/CHF are good for Switzerland

In forex markets, the Swiss franc has hit its lowest versus the euro since October 2019 thanks to rising bond yields. That's good news for Switzerland.

Need to know about the Swiss franc

The Swiss franc is deflating as bond yields surge. Investors are dropping haven assets like US Treasuries and the Swissie in favour of assets set to benefit from the reflation of the global economy.

Like the rotation happening in other asset classes, the move out of the Swiss franc began in November after the US election and when the first vaccine trial results were announced. 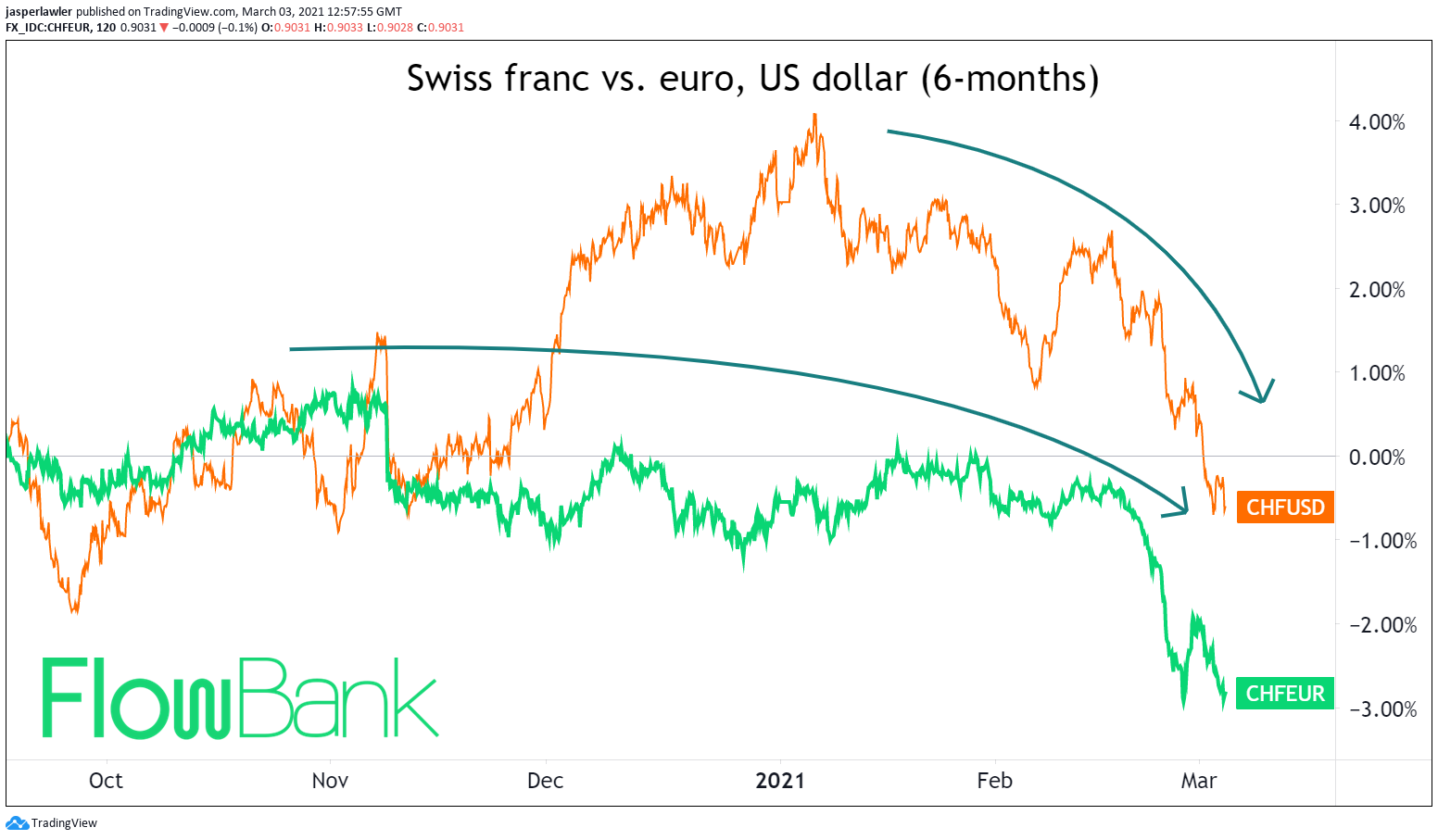 The price surge this year has taken EUR/CHF back above 1.106 to levels last seen in 2019. The 1.106 level could serve as a tipping point for whether we have seen a long term top in the Swiss franc (bottom in EUR/CHF) 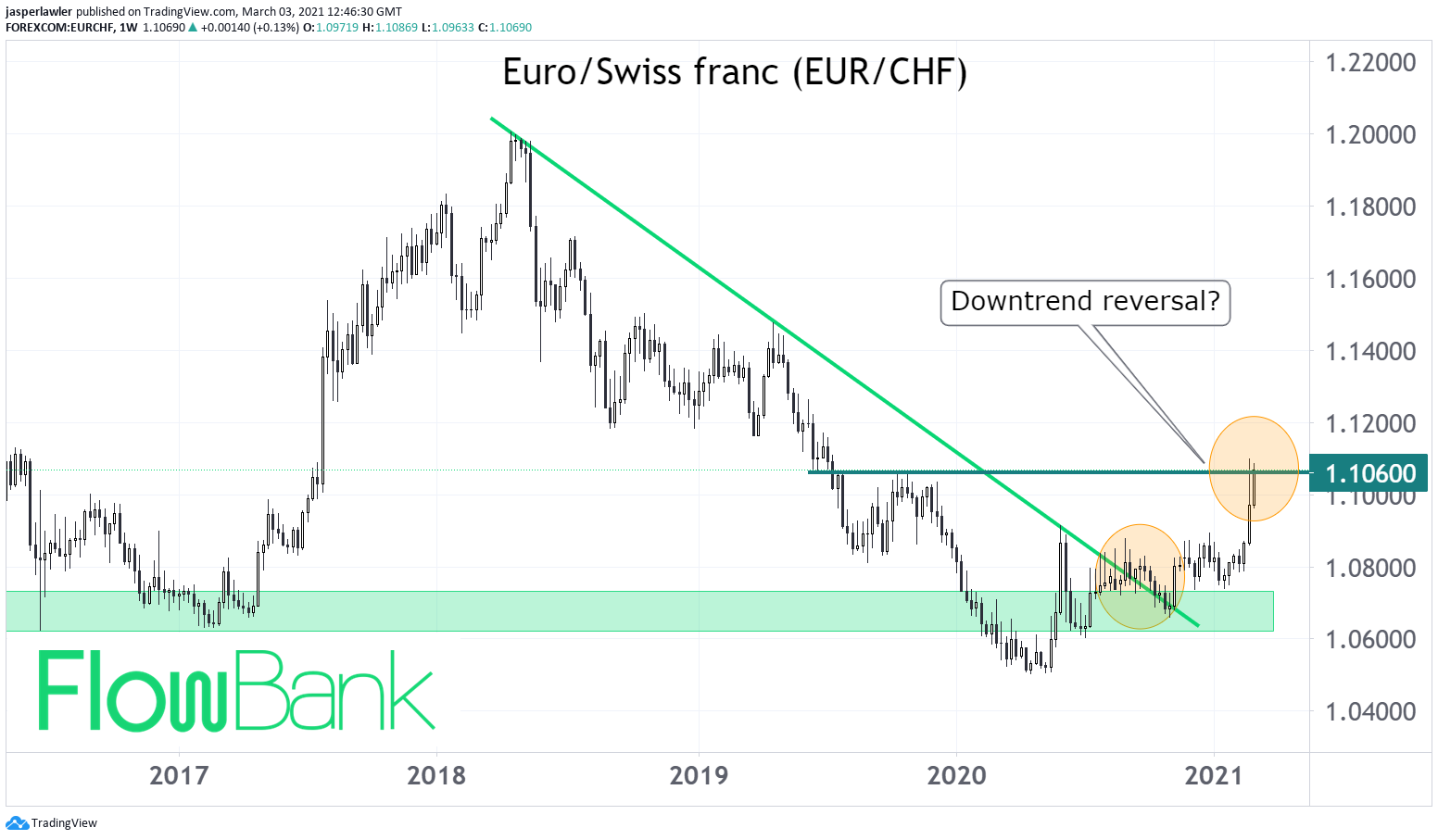 How do higher bonds affect EUR/CHF?

The primary affect of the bond market on EUR/CHF is through the interest rate differential, that is the difference between the yield on Swiss and Eurozone government bonds. 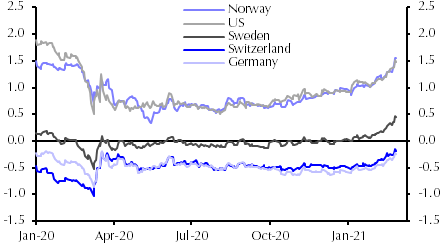 However in this instance, Swiss and German yields are moving almost in lockstep, with 10-year yields still below zero in both countries.

A divergence whereby German yields move higher than in Switzerland, perhaps thanks to large Europe-wide fiscal stimulus would be a positive catalyst for EUR/CHF but there is no evidence of that yet. The behaviour of relative Swiss and German bond yields in of themselves would suggest a more sideways range in EUR/CHF, perhaps not extending beyond 1.15.

Why is the Swiss franc a haven?

What is happening is that the Swiss franc saw a huge bid as a haven asset during the early stages of the pandemic. Investors poured their money into the traditionally stable Swiss banking system and got out of riskier assets. That came at the end of a 2-year downtrend in the exchange rate.

Now as the pandemic is increasingly in the rear-view mirror, investors are looking to assets that benefit from growth, not safety. The losses in the Swiss franc are a symptom of the unwinding of the haven trade.

By that logic, the biggest risk to any short Swiss franc trade is the re-emergence of a risk-off tone - whereby stock markets sell off, bond markets rally (yields fall) and haven currencies gain.

Who is selling Swiss francs?

As EUR/CHF reaches new 52-week highs, it will likely catch the attention of systematic trending-following CTAs. The CME COT report already shows an increased short-interest in the franc from large speculators.

One of the ‘upside risks’ to the Swiss franc that looks to have been removed is the threat of being dubbed a ‘currency manipulator’ by the US. There was an idea that Swiss authorities and the central bank would have to change tact on their policy to weaken the franc were the US to do it. Well the US officially labelled Switzerland a currency manipulator, but its bark was worse than its bite, and the Swiss politely ignored it. 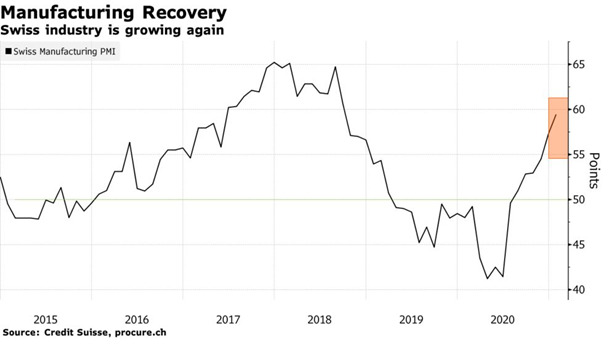 So for Switzerland more broadly, were the Swiss franc to have topped against the euro and US dollar, that will favour Swiss exporters, boost Swiss growth and likely be favourable to the Swiss stock market.

How to play the Swiss franc