It seems as though buying the dip has been the name of the game, with China being the surprising exception, at least for the short run. Is there a value rotation at play?

It is hard for Chinese households to increase their wealth with savings accounts paying 0.3% and corporate bond defaults rising quickly. Government bonds, after taking away inflation, pay 1-2% and with the upside for assets like equities and real estate capped by authorities, it is unclear how this middle class can foresee a consumption-led future. The housing market has been capped mainly because the government has feared that a speculative housing market may have taken shape rather than a growing access to real estate.

Examples of government clampdowns are not new in China. Think back to the 2014 rally in A-shares that led to the tightening of new account openings, or the surge in peer-to-peer operations that got shutdown in 2017. Since February $1 trillion has evaporated in Chinese tech and education and gaming. Private apartments sales are capped which forced Evergrande into default and the ban of crypto further highlights the countries desire to support its local currency and CBDC projects.

We go into more depth on the macroeconomics below, but in a few words, a weaker domestic demand will push down Chinese output or GDP which for a country that is not consumption-led says a lot about the growing middle class. From what we have seen in recent figures, the issues surrounding Evergrande are about the unfinished projects in more than 200 cities and undelivered contract sales to about 2 million hoe buyers.

In China, a lot of real estate financings come from local government vehicles called ‘’LGFV’’, but those are now getting the axe by the party further depressing domestic demand—one result negative is that Chinese equities are now trading below their EM counterparts.

We look at the KraneShares CSI China Internet ETF (KWEB) to reference the current level of pain as it has continued moving downwards in the past few weeks. However, we have seen some changing dynamics as of late i.e. KWEB reversing northbound. Of course, this is not an argument for Chinese tech right now because everyone realizes the power of authorities and the pivotal moment we are right now.

However, the idea is maybe there is a longer-term value play setting up. KWEB is no trading in the lower part of a recent consolidation, a consolidation that has been taking place since July. There have been some unprecedented trading days as indicated in purple below which translates to a sort of redistribution of money. While volatility remains a point of concern, a reset of this sort may be hard to capitalize on later. 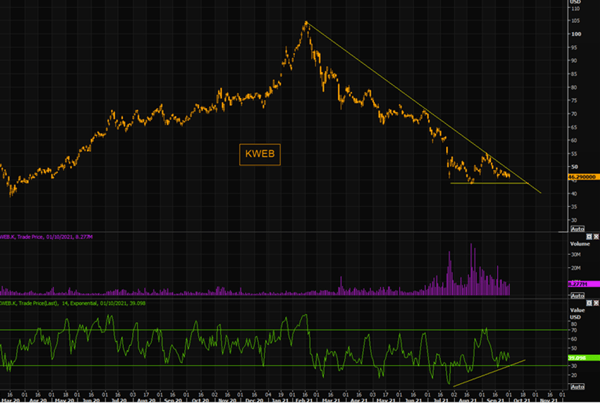 Monday October 18th, will see Chinese GDP growth rates come out and those familiar with the matter expect a downgrade from 7.9% to 5.0% because of a dragging down in property and infrastructure investments as well as weak consumption. Retail sales growth figures which are also set to come out on the 18th, are expected to fall to 2.3% from 2.5% YoY mainly attributed to a fragile consumer sentiment amid the covid outbreaks (though few they are).

On the inflation side, CPI inflation will likely stay around the previous 0.8% level or soften as food prices have started to decline. PPI inflation on the other hand is expected to rise north of 10% from 9.5% in the month of August because the price of commodities is still skyrocketing in relation to production cuts ordered by the state and a power crunch seen worldwide.

What about the Chinese steel market?

Since the authorities put their foot down in order to cool the markets, production at steel mills has continued to decrease. Each region has seen a different outcome with steel production, but it appears as though the production tightening may continue in October.

Overall, the profit per ton of steel has increased but some attribute this more or less to an increase in spot market prices. Steel mills have turned to caution with estimates indicating a tightening supply and demand balance this month.

We know from the historical data that October tends to invite a whole host of volatility as we crack open the start of Q4. More significantly is the trend that shows a tough September is often trailed by a rough September—which is the case this year.

September 2021 was a bearish month closing down 4.76% and when September is down, October can struggle and on average only perform upwards 54% of the time, with an average return of -0.41%.

Also, volatility in October is a well-known fact with the VIX tending to rise. SPX seasonality suggests that an equity market correction can continue into October, the good news however is that weakness in October often sets up a bullish run going into the November and January seasonality.

Turning our attention to Chinese markets; according to MSCI, the past ten years have tended to show positive average returns at a level greater than any other month. It is quite hard to look at China as an investment opportunity right now because of the turmoil around Evergrande, but this crisis is not going to last forever. Seasonals might suggest that October could be the month where China see a breakthrough. 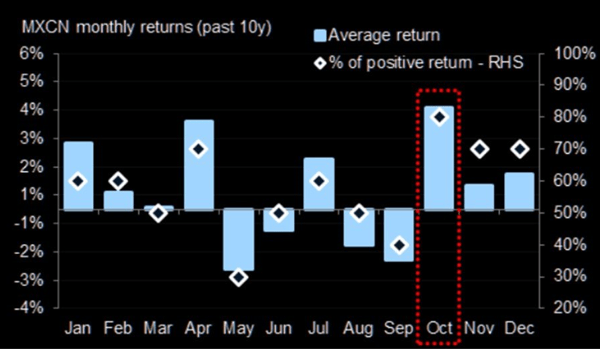