Semis, should we be worried?

The semi-stocks have suffered losses year so far due to various worries, including those about China, cyclicality, interest rates, supply chains, and export control. However, the negativity surrounding semiconductors peaked around the middle of October. The SMH ETF, which monitors the sector, has increased by 25% since then. Is the worst behind us?

There are early indicators signalling that the world economy is slowing down as a result of the conflict in Ukraine and increasing interest rates. Global commerce is beginning to stagnate, confidence is deteriorating, and credit markets are under pressure.

A key benefactor of the world economy, South Korea saw its exports fall for the first time in two years. Data from the customs office on Tuesday indicated that headline exports decreased by 5.7%, worse than forecasts of a 2.1% decline (1st November). The greatest source of revenue for Korea, semiconductor exports, fell to their lowest level since 2019, while shipments to China saw double-digit declines for the first time since the epidemic started.

Amidst this market turmoil, the Nasdaq is down 30% year to date, as rising financing costs mean that investors no longer have the ability to invest in growth at all costs. This is true in particular for companies with negative earnings.

This reset in market expectations also triggered the correction of the semiconductor industry, which lost 45% from its peak at end of 2021 to October this year and is still -31% as of today. High levels of inventory, resulting from firms’ difficulty in responding to the short-term downcycle besides Federal Reserve’s aggressive tightening policy has dampened risk appetite and growth expectations for the industry.

Nonetheless and notwithstanding the short-term risks, it is reasonable to argue that there is more to semiconductors this time around than in the past and that the current correction presents a great opportunity to start building positions in what will be part of our future everyday life.

Semiconductors are a new commodity. A commodity together with a necessity of great importance to national security, healthcare, and everyday life. A worldwide arms race in semiconductors has been sparked by the industry, and there are patterns emerging in the background that are important to keep an eye on.

Despite the short-term snag, there are several applications that will generate demand in the medium to long term to maintain sustained development over the following five years. Because advancements in semiconductor technologies are essential to the development of technologies such as artificial intelligence (AI), augmented reality (AR), virtual reality (VR), the Internet of Things (IoT), autonomous and electric vehicles, high-performance computing (HPC), satellite communications, 5G/6G, smart cities, health technology, etc., many market experts think that the semiconductor industry still has a long way to go in terms of growth.

Foundries are anticipated to benefit greatly from future demand within the sector. Foundries are semiconductor factories, but they differ from conventional factories in several ways. To minimize any unwanted vibrations from the soil, their foundations must be as solid as bedrock. A semiconductor could be doomed by an incorrect etching that is just a few nanometers away. To prevent contamination during manufacturing, foundries must be completely dust-free. It's been reported that foundries are 10 times cleaner than operating rooms.

Foundries have a fairly small number of players, as you might have already realized. The Taiwan Semiconductor Manufacturing Company (TSM), Samsung Electronics Co Ltd. (SSNLF), and Globalfoundries Inc. are noteworthy foundries (GFS). The Intel Corporation (INTC) is attempting to become a fourth manufacturer of third-party semiconductors. 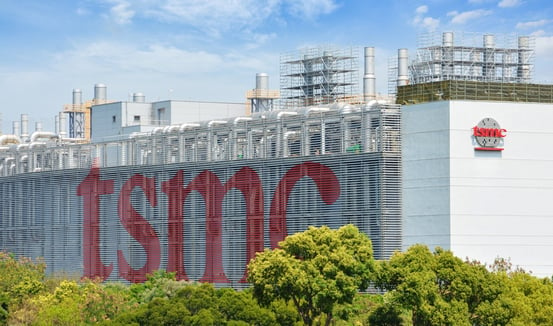 EU & US increase investments in semis

Recently and upon rising geopolitical tensions, major political moves around the world have surrounded this sector because of their importance to progress and the world economy.

The European Union states decided to move on with a $44.4 billion ($43 billion) plan to boost the bloc's semiconductor output, overcoming a significant obstacle in its effort to support the high-tech sector. By 2030, the EU wants to generate 20% of the semiconductors used worldwide. The initiative has already attracted a number of businesses, including Intel, GlobalFoundries, STMicroelectronics, and Infineon Technologies, which have already announced new semiconductor production facilities.

With the CHIPs and Science Act, which provided $52 billion in subsidies for domestic semiconductor manufacturing expenditures, the Biden administration also made semiconductors a priority earlier this year. In addition, the US administration felt that it was important to support Taiwan in a future clash with China and to impose additional rules on businesses that sell chips to Chinese businesses.

Government figures released last week revealed that the economy grew at a higher-than-anticipated 2.9% annual rate from July through September. Additionally, we continue to get optimistic information about inflation that shows a slowing of prices. Prices in both Europe and the US came in below predictions, indicating that the quick cycle of global tightening may soon be coming to a halt.

Along with macro statistics, the recent Berkshire Hathaway investment in TSM, worth around $4.1 billion USD, also helped to boost confidence in the company and the semiconductor sector. This shows that despite the market's general slump, certain robust areas may still offer respectable growth.

Today's markets are dynamic, with investor mood swinging drastically from week to week, which is why when you identify excessive euphoria or overpowering pessimism, there is an investment opportunity to be found. Company valuations in the semi-industry are beginning to seem appealing and given their role in shaping the future economic and geopolitical environment, having some exposure might pay out well in the future.