Share buy-backs: what it is and why Microsoft does it

When a company buys its own stock it is called a share buyback program. How does it work and why are companies like Microsoft doing it?

A company has a range of options when using their extra cash. They can choose to directly invest in their business, such as buying land, building a new factory, augmenting the R&D budget, hiring new employees, acquiring other businesses and adding their know-how and experience to their toolkit. These are all options to nurture the company’s growth and development.

However, the company can also choose to keep a portion of its cash to return value to its shareholders through either dividends or share buybacks. In the case of a shares buyback a company purchases its own shares adding them to the balance sheet. This naturally makes the stock price go up as there are fewer shares on the market. As shares outstanding decrease, existing shareholders hold a larger share of the company. Indeed, you hold a higher percentage when owning 10 shares out of 100 than 10 shares out of 150.

Microsoft to perform a $60B shares buy-back

Last week, Microsoft approved such a buy back program. The second largest company in the world with a market capitalization of $2.2 trillion plans on buying $60 billion worth of its own shares, the biggest repurchase by the software giant to this day.

Why would Microsoft opt for this alternative? Well, they simply did not have to choose, for they could do it all. Sitting on a $130 billion cash pile, it could afford to invest in their business, boost dividends and perform this gigantic share buy-back. What’s more, $60 billion is only 1 year of profit for the company. To give you some measure of this sum, it would be enough to buy Lululemon, or Ferrari (the company). For Microsoft, it is “only” 2.5% of their market capitalization.

Microsoft is not the only company to double down on buybacks this year. Indeed, many companies with too much cash on their hands are making the same strategic choice. In fact, S&P 500 companies spent more money on buybacks than on capital expenditures. Over $370 billion worth of shares were repurchased in H1, a 30% from the first half of 2020. 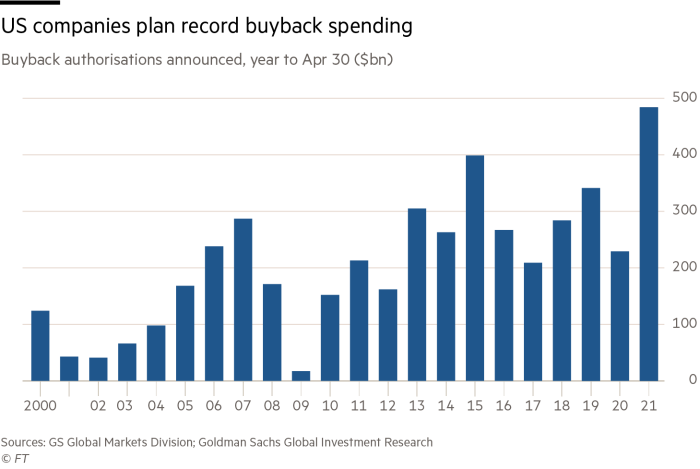 Campbel Soup, Target, Tupperware, Morgan Stanley and even Macy’s (which does not even hold much cash) chose to enter share buybacks this year. This could be attributed to two reasons. First, they might want to reward shareholders for the insane profits registered during the pandemic or secondly, the next tax reform might have a clear impact on buybacks, meaning that to save money, these company preferred making the buyback move earlier.

Advantages and drawbacks of shares buybacks

Share buybacks have more than one advantage. First, as previously mentioned, it increases earnings per share, as all things being equal, a diminished number of shares will result in a price rise. A higher EPS is good for it is rewarded by Wall Street, boosting the stock and managers’ visible performance. It can also be a decent protection against hostile takeovers. Some companies also do it because they believe that their stock is undervalued, and such an acquisition can also create a new support level for a stock during a recession or a market correction – which might be the case for Microsoft, looking at the Nasdaq stock index this past month. Finally, buying one’s own share reduces the cost of capital: shareholders are looking for a return on investment, but when fewer shares are owned by the external players, the cost of equity drops.

However, there are also cons with share buybacks. Indeed, the EPS is an important measure to gauge a company’s financial health. But, increasing it artificially while earnings and sales remain unchanged can be misleading for investors unaware of the manipulation. Sometimes, a buyback is also performed to let insiders benefit from the price bump – such as by executing their stock options. A price bump usually is soon corrected by the market when it realizes that financial fundamentals have not changed. Finally, unaware investors buying after the price jump can quickly lose money.