The underwhelming quarterly earnings by major United States semiconductor companies over the last week paint a gloomy picture for the industry. Some analysts believe that the semiconductor boom could be coming to an end, while others think the upcycle could continue despite some moderation in growth. Let’s have a look at the drivers.

In an industry famous for its roller-coaster cycles, chipmakers are bracing for a weaker near-term outlook. The semiconductor market enjoyed a massive run-up in orders during the pandemic and there was hope in some circles that the boom could be sustained for several more years without a painful pullback. 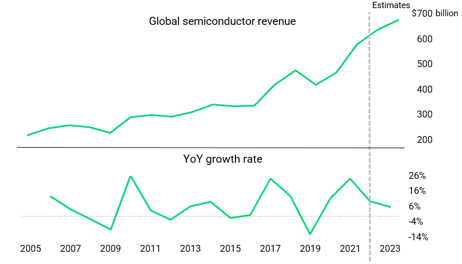 Yet, spending on goods is starting to normalise from high levels as consumers are dealing with inflated prices and worrying about a potential recession. Consumers are starting to migrate from more expensive discretionary products to value necessity goods. This is more pronounced in durable, high-ticket items, in which the pace of consumption is waning rapidly.

Companies like Nvidia are reporting more than 40% annual declines in their core businesses, while Micron Technology warned investors that revenue wouldn't meet projections, stating there will be "significant sequential declines in revenue and margins". Total processor shipments experienced their largest year-over-year falloff since about 1984.

However, the chipmakers that are facing stockpiles of unused inventory and declining orders are mainly concentrated in one sector: the PC industry. Cisco Systems, which produces the machinery that drives the internet, said it still cannot fulfil the demand for its equipment. As with many other less-hyper-advanced technology firms, Cisco has experienced shortages of a variety of chip types, including those that perform relatively simple functions but are still critical to complex devices like network routers and switches. Applied Materials, the biggest maker of machines that manufacture chips, projected a very similar view in its earnings report.

Supply running ahead of demand

Another issue is the race between China and the US which has led to a broad push by governments to subsidize new factories and equipment. There are 24 new construction projects of large-scale plants, known as fabs, getting underway in 2022, according to the chip equipment industry association SEMI. That’s well above the average of 20 that’s been tracked by SEMI since 2014. Total spending on equipment will reach $117.5 billion in 2022, up 15% from the previous industry record, which was in 2021. Next year SEMI predicts that spending to increase to $120.8 billion. It used to be a competition between companies. Now it’s a competition between countries because of the strategic importance. This has increased the risk of overinvesting in production capacity heading into an economic slowdown.

In recent years, the business of manufacturing chips had become increasingly precarious because of the massive upfront costs. The scale required to make that kind of investment has reduced the number of companies with leading-edge technology to just three: Samsung Electronics, Taiwan Semiconductor Manufacturing, and Intel. These were also the biggest beneficiaries of the post-covid chip boom. 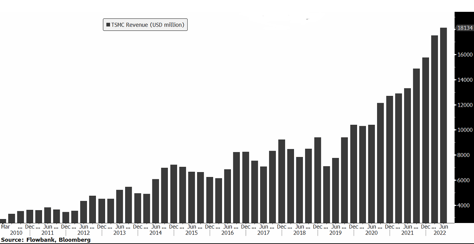 But the push to build up chip production in the US ($50bn CHIPS Act) and Europe, as an alternative to Asian manufacturing, is disrupting the industry and threatening the increased efficiency the industry has enjoyed over the past decades. Moreover, geopolitical tensions are also another factor impacting and rendering vulnerable the semiconductor industry. If you take a company like Nvidia (NVDA), they don't manufacture any of their chips and are reliant on third-party partners, like TSMC (TSM), who are predominantly domiciled in Asia. Factoring in this risk, naturally, the equity risk premium to own semiconductor companies has gone up.

Everybody is bad at forecasting demand

True that macro risks remain elevated but, in the end, it is unclear how this will ultimately impact the industry. In the meantime, chipmakers remain bullish about the long-term demand. Executives still expect the industry to hit $1 trillion in total revenue by the end of the decade.

In the market, share prices reflect chip executive’s view. Producers' share prices are recovering since last month. The VanEck Semiconductor ETF which tracks the performance of global chip designers and manufacturers has increased more than 26% since its July lows. 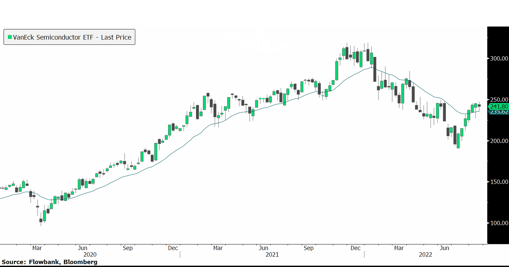 One plausible reason for the recent recovery is related to the general feeling in the market that the economy is likely to avoid a prolonged recession, and a soft landing is possible as signs of a turnaround in headline inflation are helpful and are already showing up in household expectations. In addition, the resilience of secular trends such as 5G, electrification, and artificial intelligence are also believed to continue to provide support to the semis-industry.

The semiconductor industry, like other industries and markets, is prone to cycles. The industry has a set of challenges, from a deceleration in global growth and increased international geopolitical tensions to the rising risk of overinvestment. And a chip glut may be coming, but for much of the industry, it's not here yet. Taking a longer-term perspective, the industry is likely to prosper given the multiple sources of growth supporting demand and an increasingly important part semis take in modern life. Therefore, despite current uncertainties, being selective and considering building positions in leading semi-designers and/or manufacturers could offer investors attractive returns in the coming years.