Silver prices have plunged by more than 20% this year from YTD highs, reversing all the 2021 gains. Looking ahead, silver bugs face a big challenge. With silver prices now falling under major, multi-year support, can the price snapback or will the breakdown bring about a new long term downtrend?

In order to best gauge the likely reaction as we probe the big 21.4684 level, let’s take a look at the key factors which have driven silver prices lower this year and examine whether these factors look likely to reverse, allowing silver to bounce, or intensify, pushing silver prices lower.

Silver started the year under heavy demand as gold prices were driven higher on haven flows as the war in Ukraine broke out. With gold rallying ahead of the news and surging higher as the news broke, silver prices were dragged higher via their correlation with gold. However, this reaction was quickly reversed as risk assets found their footing and rebounded, leading gold and silver prices lower.

The biggest driver of downside action in silver this year has undoubtedly been the aggressive hawkishness we’ve seen from the Fed which has contributed to the near 10% rally in the US Dollar. The Fed started the year on the back of reasonably hawkish forecasts from December 2021 which saw markets pricing in a 0.25% hike in March. By the time this hike came around, however, the Fed’s view was decidedly more hawkish, with the central bank discussing the possibility of a .5% hike.

Along with the .25% hike which was announced, the Fed signalled that more rate hikes would be coming in 2022 than previously projected. Additionally, inflation was set to peak at a higher level than previously anticipated as a result of the significant impact of the Russian invasion of Ukraine and ongoing global supply issues.

With the Fed then hiking rates by .5% in early May and signalling further such hikes to come in the near term, the US Dollar has been on an impressive winning streak. Strength in the Dollar has dealt a heavy blow to silver demand, making the metal more expensive.  With inflation on the rise and global yields soaring as central bank after central bank hikes rates and signals further hikes to come, traders have enjoyed much better success chasing returns elsewhere.

However, as inflation continues to soar and global interest rates rise alongside it, a new dynamic has entered the outlook for silver. Growing fears of a global recession have taken a heavy toll on equities price recently. Markets are increasingly concerned that the combination of higher prices and higher rates will drive growth lower. These concerns have been in sharper focus recently in response to weaker data out of China which has seen the return of regional lockdowns over recent months.

Given silver’s use as an industrial metal, it tends to bear the brunt of equities downside, particularly weakness in industrial sectors and key stocks. With traders now anticipating a slowdown over the back end of the year, demand projections for silver have been falling similarly.

Additionally, the metal has been deriving little support from gold which remains under pressure due to the stronger Dollar. Typically, in times of lower equities prices, gold sees firm safe-haven demand, however, currently safe-haven inflow looks to be focused primarily on the Dollar, reinforcing this dynamic.

Looking ahead for silver, the near-term outlook appears quite tricky from a macro perspective as the current set of market themes are likely to keep silver pressured.

However, as we test this major support level a technical bounce cannot be ruled out. Often these large levels are used as targets by longer-term players, allowing for a short squeeze as we test support.

Looking further out, over the next 3 – 6 months, the big question will be what happens with the Fed and rates. There is already chatter that inflation will start to slow in coming months in response to Fed rate hike action. This week we saw US CPI slowing by 50% in April from the prior month’s reading. Additionally, given recessionary fears, the Fed might pause its tightening program ahead of schedule if inflation does moderate. In these circumstances, we would likely see a bounce in silver. 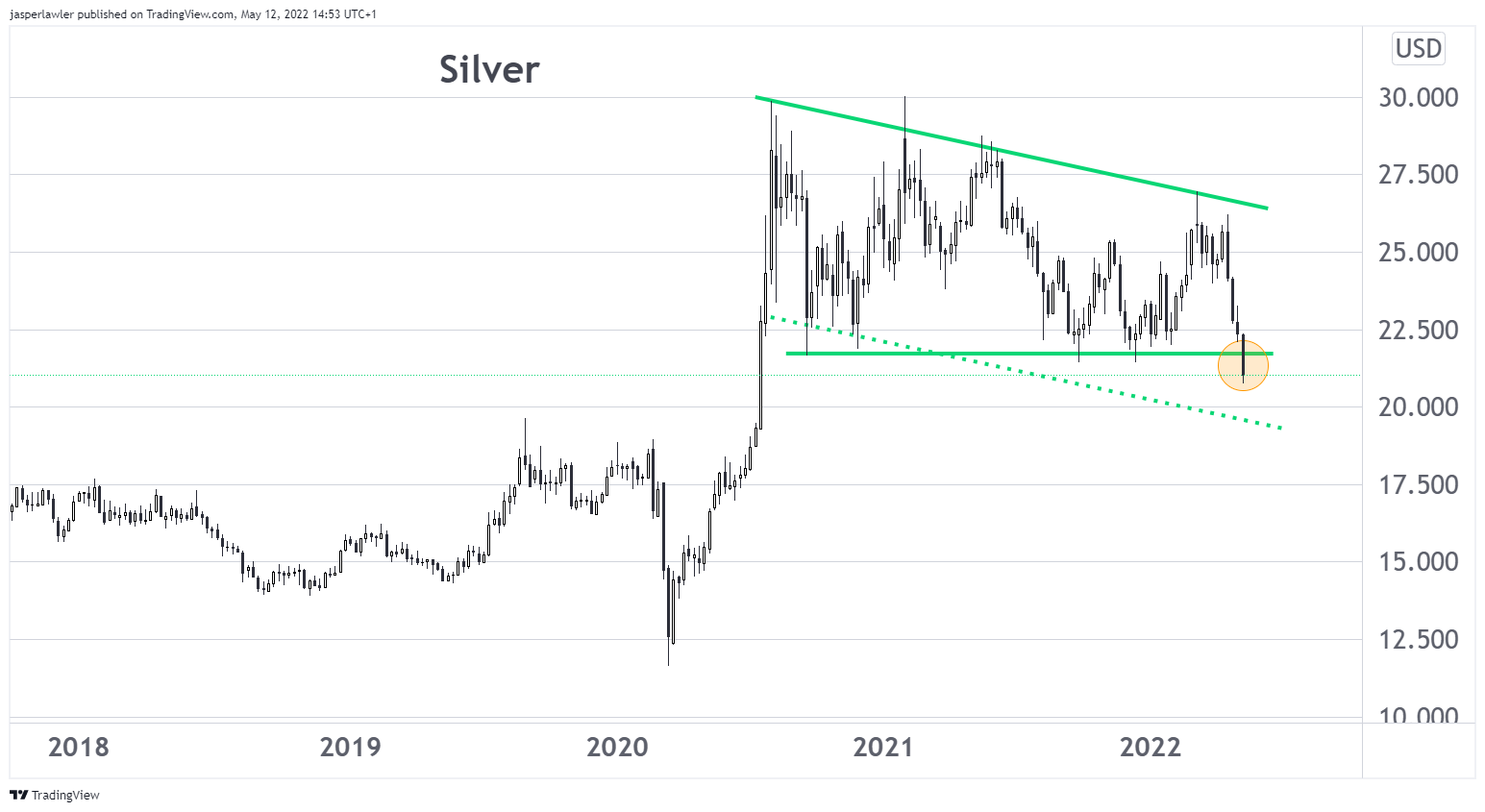 Looking at silver on the weekly timeframe we can see that price is currently testing a major support area between the 22.50 and 22 levels. This region has prompted many bullish reversals over the last two years and holds the potential to act as a platform for a similar reversal this time around.

Given that we likely have lots of orders resting below the lower level, it is not uncommon to see price pierce below the level before reversing higher. However, If the price sustains a break under the lower level, however, this could open the way for a move down to 20.0 then 19.0 next.