Soaring prices for agricultural commodities: should we fear social unrest?

The prices of wheat, soybeans, corn and other food commodities are exploding. Ten years after the Arab Spring, a similar scenario could repeat itself, but this time on a global scale.

Many of us certainly remember the Arab Spring. In 2011, a wave of unprecedented demonstrations shook the Maghreb and the Middle East. From Tunisia to Egypt, Libya or Bahrain, millions of people went down in the streets to challenge the established order. At the origin of these movements, an important socio-economic element: the rise in the price of raw materials, especially wheat. The region imports a large portion of its food, about 30% of the world's wheat. The 125% increase in the price of wheat in under a few months was a necessary – even if not sufficient – trigger for these very important social crises.

Ten years have passed and the surge in agricultural commodities is back: the year 2020 has seen the price of wheat (+20%), corn (+30%) and soybeans (+50%) explode. And the rise continues into 2021, to the point of pushing the Bloomberg Agriculture Spot Index to its highest level in a decade. 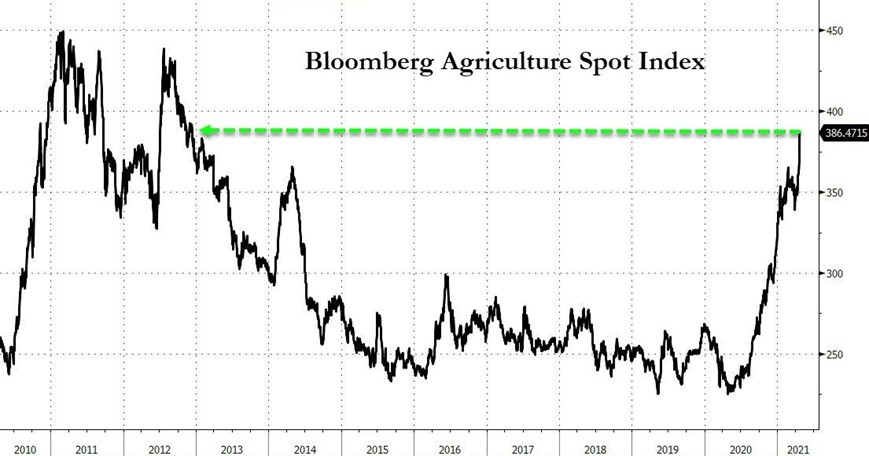 What are the reasons for this price surge?

On the demand side, China's appetite is part of the reason for this overheating. Indeed, the country is building up huge stocks of agricultural raw materials after poor harvests. The aim is to rebuild its herds, especially pork, which were decimated by swine fever. China has imported more than 100 million tons of soybeans and 11.3 million tons of corn, a rise of 57% in just one year. China is seeking to secure its food supply in the event of a resurgence of the epidemic, and to do so it is buying at high prices.

Another explanation for the increase in demand, which is linked to the COVID-19 pandemic, is a panic effect among certain importing countries that fear the pandemic will stall or protectionism by exporting countries. These countries are anticipating by overstocking, a behaviour similar to that of consumers who overbought during the first containment.

Persistent disruptions in the supply chains have an impact on supply. As is often the case, the rise in some commodities has repercussions on other commodities: the rise in oil prices and the shortage of available cargo ships are impacting transportation costs.

Within food commodities, there is also a knock-on effect: for example, the rise in the price of corn pushes up the prices of wheat and soybeans. The entire agri-food complex is therefore in turmoil.

Climatic aspects also have an impact on supply. Drought in Brazil and freezing temperatures in the United States have supported the price surge.

BAMWX meteorologist Kirk Hinz notes that drought in Brazil "continues to be a big concern going forward. Also in Latin America, reports that the Argentine government is considering increasing its export taxes on grains and oilseeds could further complicate the situation. Argentina plays a very important role in supplying world markets, particularly as the world's largest exporter of soybean oil.

In the United States, the cold snap that hit at the beginning of April will have an impact on spring planting development and therefore on supply. The cold snap will likely delay crops across the Corn Belt. It is still possible to plant corn in the winter, but cold soil can take much longer to germinate corn kernels, increasing the risk of plant perishing.

This combined effect of weather problems, possible export taxes in Argentina and increasing demand from China seems to be the reason for the price surge.

But for others, this situation is simply one of the perverse effects of the ultra-expansive monetary policy of central banks – the famous "quantitative easing".

For SocGen strategist Albert Edwards, the Fed's "QE2" was the main cause of the 2010-2011 food price bubble that contributed to the social unrest and subsequent revolutions in many Arab countries.

For him, a similar scenario is happening again. Too much liquidity has created many speculative bubbles. The agricultural commodities bubble is just one of many. But it has very unfortunate consequences on the daily life of many people.

The risk of a new "people's spring" and global social unrest

As mentioned in the introduction, this surge in food prices could trigger social unrest in many emerging countries.

For countries already struggling with the economic crisis, this record price increase is unbearable. Specialists note a drop in purchases by Algeria and Morocco, which are highly dependent on food. Egypt, the world's largest importer of soft wheat, is also affected. Lebanon, Iraq and Yemen – countries where food insecurity is high – cannot keep up. The United Nations Food and Agriculture Organization (FAO) says that 45 countries now need external food aid.

But even in developed countries, food insecurity has become a real problem during this pandemic as food prices are undeniably rising faster than inflation and incomes around the world.

In Europe, the impact is less visible because the area has developed agricultural policies to mitigate its dependence. On the other hand, the rise in agricultural commodities influences the prices of everyday consumer goods because many companies pass on the rise in commodity prices in their sales prices.

Rising inequality is one of the major risks to the global economy – soaring global food prices could be a trigger for major social unrest in the future – in all corners of the world.

The long-term impact of climate change

In the long term, tensions could be even more acute. Global warming is making extreme weather events such as droughts, heat waves, rain and cold waves more intense and frequent. These events have an impact on the crops. This is what happened in the United States this winter, where the polar cold led to deadly frosts on plants.

In 2017, a study published in the Proceedings of the American Academy of Sciences (PNAS) estimated that with a one-degree Celsius increase in global average temperature, corn yields could fall by 7.4%, wheat yields by 6% and rice yields by 3.2%. In January, the World Economic Forum called for the transformation of our current failing food systems in order to feed 10 billion people.

At the beginning of December 2020, we mentioned in these same columns the hypothesis of a new commodity super-cycle, sustained not only by a strong recovery in demand but also by numerous supply constraints. Portfolios allocated to commodities have been able to benefit from this asset class. But the case of investment in food commodities is more problematic because it raises the question of ethics: rising prices can enrich investors when they starve people. As a result, many asset managers and banks prohibit any allocation in this segment of commodities.

One indirect way to gain exposure to this theme is to invest in agriculture-related stocks such as Archer Daniels Midland (ADM) or Bunge (BG) - see chart below.

But at the level of an overall portfolio, the rise in agricultural commodity prices represents a risk for all risky assets. Rising social tensions in the wake of the pandemic could jeopardize the economic recovery and lead to political instability in many countries. The economic recovery remains fragile, and many assets are overvalued - so the slightest grain of salt can be very problematic. Central banks think they have the upper hand by pursuing ultra-expansive monetary policies. But as the saying goes, there is no such thing as a "free lunch".