Key points seen in this article:

ARK Invest is led by Ms. Catherine D. Wood, an innovation-centric investor. Her work has become very well known in the past year as her funds have performed very well. Her investment thesis is that disruptive technology has the ability to wiggle itself out of economic problems because technology is about solving problems. Such innovations are usually not well priced by traditional investment strategies because folks cannot see how big the ultimate opportunities become over time.

For example, rare were those who correctly forecasted social media's effect on our lives, think Arab Spring, Cambridge Analytica scandal and billions of users and advertisement dollars. Ms. Wood is bullish on cryptocurrencies and has said she believes in the Bitcoin price surging to $500,000. She became increasingly respected after her bullish Tesla investment thesis paid off. She has said in an interview that she personally believes the next technological revolution is going to happen in Genomics, with companies like Crispr developing a new era of human existence. Before jumping into her Space ETF, let's see what ARK Invest already has available:

ARK Invest has five actively managed ETFs that are self-explanatory.

The largest and most well-known ARK fund is the ARKK ETF with returns shown below. The portfolio's top ten companies represent 52% of the portfolio and Tesla tops the weight class at 11%. The next nine companies in order of weights are; Invitae, Square, Roku, Crispr Therapeutics, Proto Labs, Zillow, 2U, LendingTree, Teladoc Health.

Taken directly from the ARK Invest website, the ARKK price performance graph below looks like a true hockey stick. ARKK was launched in 2014 and began performing at the beginning of 2018. The top areas this ETF invests in are, Cloud Computing, E-commerce, Molecular Diagnostics, Gene Therapy, Big Data and Machine Learning, Digital Media, 3D Printing and Internet of Things. 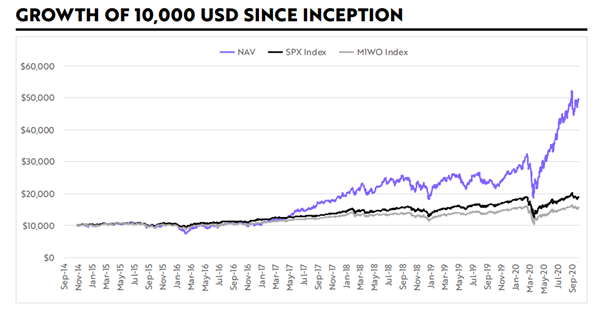 Comparing each ARK Invest ETF performance over the last year and three months, showcases the reason why ARK Invest has gained the reputation it has today. That's an average of 105.76% for the one year running return, and 25.20% in three months’ time. The 2020 performance is said to have brought investors roughly $11 billion in cash. Will this be the case for ARKX, the new ARK Invest ETF? 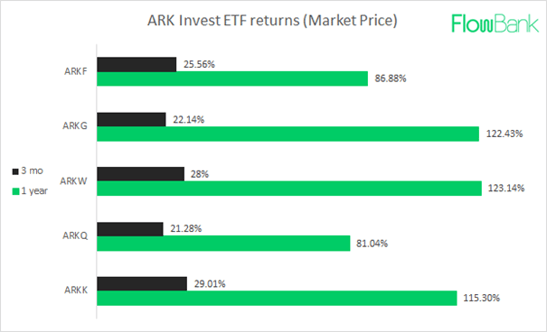 What Will The New ARKX ETF Be Made Of ?

As Barrons put it; ''Space is cold, but space investing is heating up''. Indeed, the world of Space Exploration is boiling. With Virgin Galactic's rocket reaching orbit for the first time some hours ago today, and the cost saving and launching successes of SpaceX and Blue Origin, there is a lot to look forward to in the 2020s including ARKX.

On January 13th, in a recent SEC filing, ARK Invest proposed the launch of a new Space Exploration Thematic ETF called ARKX. Wood groups Space Exploration in four categories and these are the paper trails we like to see;

The fund said it would add between 40 to 55 stocks including some ADRs and not invest more than 30% of its total assets in one single company. The fund highlights the importance of all four categories and relevant subcategories in achieving the overarching goal of successful space exploration and commercialization. They also specify that not all companies they will invest in will be profitable nor have the potential to be profitable.

Now that you know the breakdown of these investment categories, it is possible to backward induce some of the potential companies that may be involved in the fund. SpaceX is private for now so we can put that one on the backburner. However, Virgin Galactic (SPCE) and Stable Road Acquisition (SRAC) are two great space stocks that have rallied 20% and 26% this year. Virgin Galactic seeks hypersonic travel and Stable Road is a SPAC merging with Momentus, a space logistic company. SRAC plans to launch assets in orbit to facilitate the movement of cargo and enable satellites to reach further points in space.

MAXR or Maxar Technologies is a satellite-services company that saw its shares bump 20% Thursday upon the ARKX news. Lockheed Martin (LMT) and Northrop Grumman (NOC), both American defense and aerospace manufacturers, saw their stock prices move up slightly too as they both own space-launch businesses. Aerojet Rocketdyne (AJRD) makes rockets and is currently building NASA most powerful rocket yet, the Space Launch System. Nokia (NOK) wants to ''build and deploy the first ultra-compact, low-power, space-hardened, end-to-end LTE solution on the lunar surface in late 2022''. Other well-known space tickers are; Procure Space ETF (UFO), SPDR S&P Kensho Final Frontiers ETF (ROKT), and Iridium Communications (IRDM), a satellites and communications company.

It remains to be seen what firms Ms. Wood will pick. The size of the fund is still unknown but could go head-to-head with similar themed UFO, a $44 million ETF. ARK has not disclosed planned fees for the fund, but all of its ETFs cost 0.75% in expense ratio, or $75 per $10,000 invested.

Space investing is starting to grab the attention of investors around the world not just at ARK Invest; falling costs, the new Space Force (the US army branch), NASA's plans to go back to the moon in 2024 with the Artemis project as well as the Mars rover landing on Mars in exactly one month (save the date and watch the landing here 02.18.2021), all makes up for a lot of excitement.

The satellite industry association put the launch business at close to $6 billion a year and that was last year's report. Satellite manufacturing is even larger at $20 billion per annum. Launch and satellite manufacturing is done by players like the earlier mentioned Lockheed Martin but also Boeing and Airbus. Satellite operators and service providers is a $130 billion a year business with big players known as the aforementioned Iridium, but also Orbcomm (ORBC) and Globalstar (GSAT). Then you have some of the firms found in the fourth ARKX category, companies that benefit from space-based tech like DISH Networks, Trimble and AT&T. Then there's Space Tourism, an embryonic subcategory.

Morgan Stanley estimates that the global space industry could generate more than $1 trillion by 2040 up from the current $350 billion. They also believe that the most active sub sectors in the space industry, those that could offer short and medium term investment opportunities, may come from satellite broadband internet access. MS estimates that satellite broadband will weigh in at about 50% of the projected growth figures in the global space economy by 2040.

Launching satellites to grant broadband internet service will also play a role in driving down the cost of data. Demand for such bandwidth will also figure in complementary industries like autonomous cars, AI, IoT, and VR. Costs will go down significantly because of reusable rockets. Currently, launching a satellite costs $60 million, a big fall from its previous $200 million cost and estimates indicate this cost could fall to $5 million in the medium term. Satellite mass production could in the future drop this cost to half a million dollars.

The downside of the space industry is that it's a very capital-intensive industry, meaning that the need for engineers, manpower, heavy machinery, and infrastructure takes center stage. Investors can be looking at 50 year exits on some of their projects simply because the whole ecosystem is not in place yet. As of last summer, the big investment engine has concentrated around the launching companies. New providers are beginning to compete very seriously with government programs, and some of these firms are profitable considering the large demand for their goods and services. Low-cost satellite launches in orbit is in the spotlight because it is the foundation for space travel and projects. Their goal is to increase scale enough so to lower costs and enable more frequent space travel. But everything is interlinked; launch companies rely on satellite companies who rely on broadband companies who rely on governments. It's a big feedback loop and NASA, and Defense Departments remain the biggest clients and will be here for a long time until the ecosystem is fully formed.

Barrons, 5 stocks that could be selected in Wood's ARKX ETF