Supply chain bottlenecks: is the end in sight?

The good news is that the global economy is recovering. The bad news is that supply is not matching this demand. First, companies were not prepared for the speed and scale of the recovery. Second, with ongoing Covid risks disrupting production, supply chain bottlenecks continue. However, some initial indications are pointing to gradual improvements, though these could take time to materialise and lower prices again.

If you sat on the Port of Los Angeles on September 19 at the peak of the supply chain disruption, you would have witnessed an impressive sight. In this port that receives 40% of the US’s imports, the queue of ships waiting to be unloaded reached a record 73, stretching as far as the eye could see. That number has come down since then, albeit only gradually.

The World Bank estimated that 8.5% of global container ships are stalled in or around ports, which is twice as much as in January. To cope with these challenges, President Biden has even asked the Port of Los Angeles and the Port of Long Beach to start operating 24 hours a day, seven days a week, to improve the flow of goods into the country.

These issues are being felt worldwide. China was forced to close factories on and off over the past 20 months, and while the world’s export champion has picked up production again, the flow of goods is still chaotic. Germany has struggled to keep up with car production due to shortages of chips and metals and the UK is running out of fuel, due to a shortage of truck drivers.

Companies have also been lamenting these supply chain disruptions. Nike warns of inventory shortages, retailers like Walmart and Costco have had a hard time replenishing their toilet paper stocks. Salesforce estimates that logistics, labour, and manufacturing headaches combined are likely to add another $223bn to US retailers this season. In turn, this suggest that consumers will likely have to pay more for their Christmas gifts, if they can arrive at their destination. 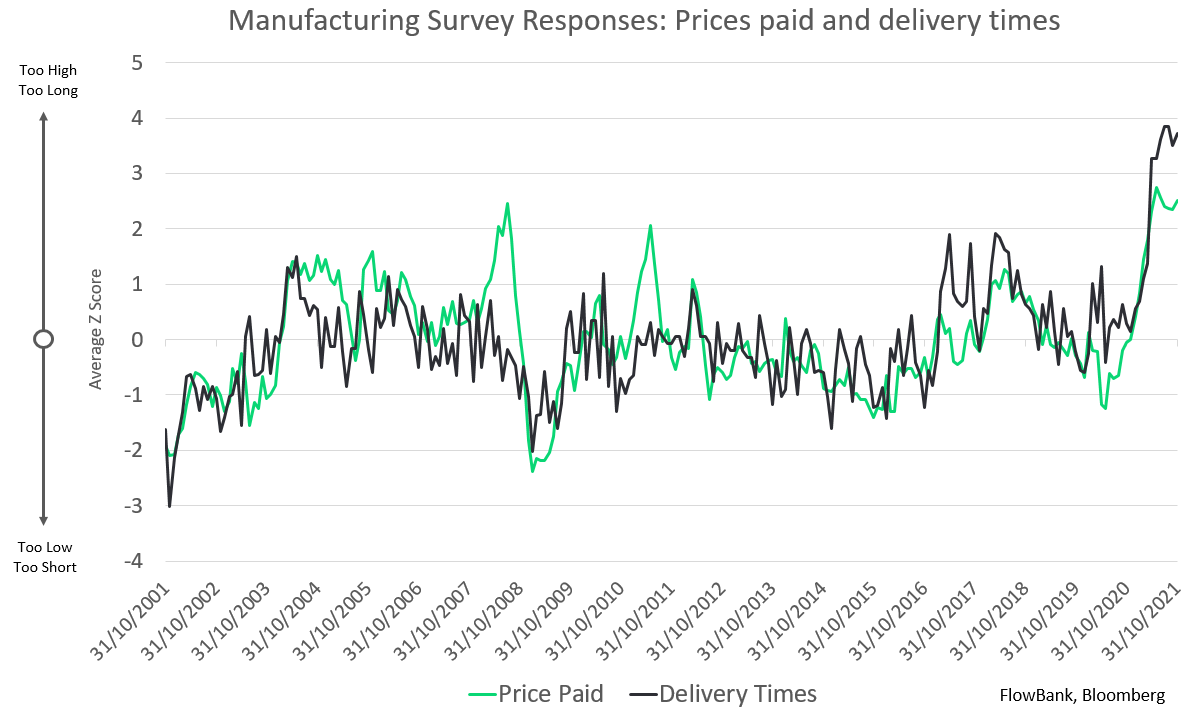 Prices paid tend to rise as delivery times get longer.

Worse before it gets better?

Experts disagree on the short to long term outcome of this supply chain crisis. The International Monetary Fund (IMF) cut its growth forecast for the year for developed countries as a result of these disruptions but expects improvements in 2022.

If we look at the loaded inbound containers to Long Beach in California, we can see that the peak took place in May with 444,736 containers, before dropping to 407,426 in August. As for the outbound containers, they dropped from 313,070 in May to 268,505 in August, indicating that the traffic is getting gradually quieter. Looking at other major ports, Singapore experienced its last peak in March while China’s was in August.

As you can see on this chart, we seem to have reached a peak in September before a certain ease in October.

Although these numbers may seem encouraging, we can but notice the high ship rates, a rise of ships sales – with old cargo boats being refurbished and thrown back onto the sea –, and ship operators that have contracts signed for years to come – the question being if they will be able to collect their payments in the long-term with such rates.

But a few businesses are also telling us the outlook is slowly improving. Apple is reportedly supposed to cut down its iPhone 13 production by 10 million units for the quarter to 80 million, but it did not come out as a shock as the Street’s estimate was of 82 million units. Chip companies like AMD or NVIDIA are also seeing their margins improve as chip costs rise. Although they will be able to sell less this quarter because of supply chain bottlenecks, these missed profits will likely simply – like that of Apple’s – transit into 2022, with a price remaining above the pre-pandemic era as companies will be ready to pay more. Samsung was able to report its highest profit in 3 years thanks to higher prices and record sales.

The main reason for investors’ worries around supply chains is inflation. If there is a shortage of goods, the ones available cost more. This has led to the highest inflation figures in the US in 12 years, though most policymakers, central bankers and the IMF expect inflation to prove transitory. The expectation is that production and delivery should return to pre-pandemic levels in 2022, though some lingering longer-term risks persist.

The economic rebound nourished high demand. This high demand emptied stocks that were already depleted. Suddenly, companies are rushing to replenish, but this has led to skyrocketing transportation costs. Most businesses expected a return to growth, but not this much, this fast. After long lockdowns and restrictions across most of the world, consumers were itching to spend. But production lines and shipping take longer to ramp up again. Moreover, zero-Covid policies across much of Asia exacerbated these disruptions, as they led to severe lockdown, production stoppages, and port and border closures.

With rarer goods and higher transporting costs, this was a double hit to prices. The global expected Consumer Price Inflation (CPI) is up 0.4% to 2.8% in 2021.

The CPI for major regions of the world is seeing a stark rise as a result of bottlenecks.

While there remain long-term risks and inflation could continue to surprise on the upside for longer, we remain firmly in the “transitory” camp. As vaccination accelerates, so should reopening, which will in turn ease supply constraints. As a result, we do not expect these disruptions to derail the global recovery, nor lead to spiraling long-term inflation. In the meantime, however, we expect a bumpy ride for investors caught between contradicting headlines, especially as the Q3 earnings season unfolds.