The Swedish Krona has been in the news lately. Our research into the country will offer you an overview of why Sweden caught our attention at FlowBank and why there is more than just the Krona going for it.

Read the whole report, or select your preferred topic:


The reason you might be reading this article is because of the Swedish Krona's (SEK) massive outperformance relative to the other currencies, and because you might be considering a trade of SEK. An image speaks a thousands words so look at the following graph, and continue reading:

The SEK relative to all major currencies, including a strong 2020 EUR has been above 3%. In fact, its average outperformance here is 8.6%. A graphic by the Financial Times showcases these numbers over a times series. What is interesting is not only the Krona being number one, but its hockey stick performance after the March crash. It took about three months for SEK to catch up and to take lead. Its position in the ranks right now begs the question: why? Why are you so strong SEK? 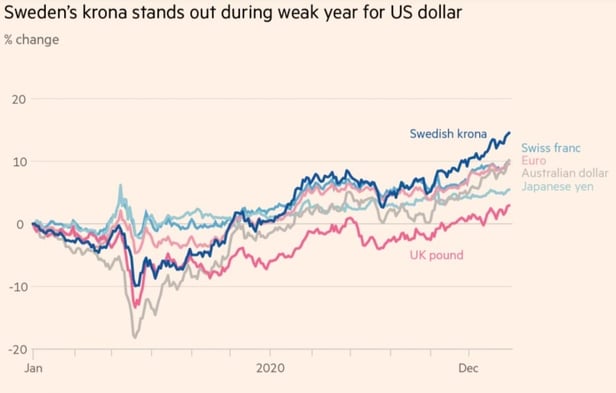 Sweden's Riksbank kept a firm grip in 2020 compared to the actions we saw in the United States and elsewhere. The central bank did however expand its balance sheet from SEK 900B to SEK 1.3T, but these figures are small relative to other central banks. See Sweden's repo rate exit negative numbers towards zero percent. It intends on staying at zero until 2022. 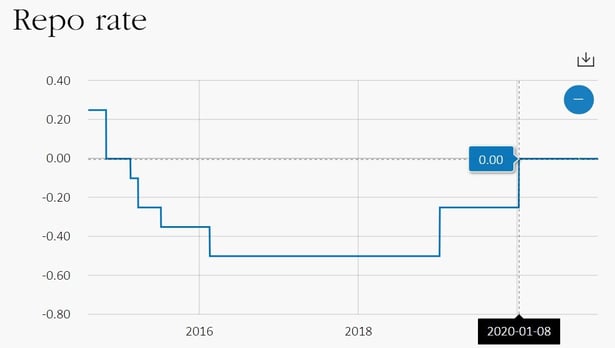 The next section speaks more to the management of Covid-19 so read along to learn about how the Swedish approach took place, and its results in the end. However, from a currency stand point here is more: economic activity was not stopped entirely like other countries so there were no lockdowns. There was social distancing, and stay at home incentives, but businesses stayed open. Labor markets and incomes actually improved (see this section). A strong labor market is the backbone of a strong economy and strong currency.

What is to come going into 2021 for traders on USD/SEK, you may ask ? What we are seeing today is a declining U.S. Dollar to Swedish Krona ratio. This means that as the numerator (USD) falls, and the denominator (SKE) goes up, the ratio declines. This is illustrated by the graph below: 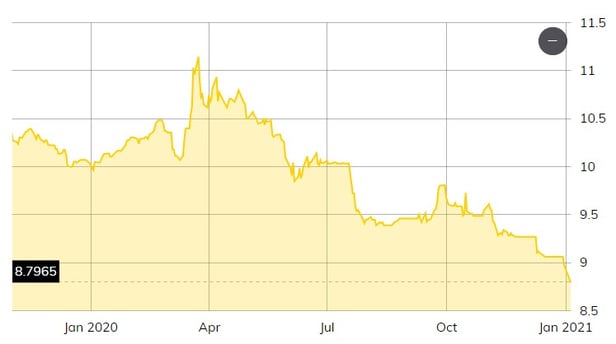 So far, there is a decent chance that this trend continues the way it has been thus far: downwards. The USD to SEK has not spent more than two days above its 100-day EMA since May so traders will tend to eagerly sell USD/SEK on any short-run rallies. In the long run, possible support levels to test could be seen from 2016, 2017 and 2018 levels in the 7.90 zone (right now the level is around 8.80), but considering the forecasts we've seen it is ambitious to assume below 8.00 levels.

Herd immunity was Sweden's approach. It did not work to prevent deaths, and this was clearly the case by the summer time. In April 2020, the Government Offices of Sweden shared a presentation regarding their response of the Covid-19 outbreak stating in the last slide ''No unique Swedish way of dealing with Covid-19''. What they mean is they are not different from the other groups in their intent to block deaths. However, they also have a slide regarding the strength of their universal welfare state which sounds a bit like a quid pro quo for their actual measures, which were conducive to calculated risk in hospitalizations. The following graph shows the strictness of social distancing measures in Sweden compared to other countries, where Sweden is the least strict of peers. This has changed though with recent critics from Sweden's king to tighten measures.

In conjunction, here are two graphs showing deaths rates. On top, the slowest and lowest rates of stringency regarding closures and the like, and on the bottom, a parabola of actual deaths from covid-19 compared with its peer group.

The original concept was to shield vulnerable folks, and accept a viral infection spread in the general public. The Swedish health authorities state that the risks they took on were through a culturally relevant prism meaning that their population was on board with the decision. The consideration was also an economic decision, and a hedge against overworked health professionals who might need to focus on other diseases not limited to the virus.

Swedes were allowed to go to work, to travel and keep their economic livelihoods (pay their mortgages and taxes etc.). Borders never officially closed in Sweden and grade schools and kindergartens were open, though the rest of schools were closed.

Depending on your take on this, Sweden was either a rock star at handling the virus (compared to the US or UK or France) or a flop (compared to Denmark). The graph below shows Sweden in black compared to peers. The graph shows daily covid-19 deaths per million inhabitants. In Europe, the Nordics have been the place to be for wind farm development, considering the government's continued backing of green investments. However, 2020 was less than perfect and the storm that it was brought down power prices, leaving some players squeezed. The price system was weighted down because of a limited export capacity to the rest of Europe and heavy snow increased hydro reserves in Northern Sweden which pushed prices under $10/MWh.

Sweden saw particularly lowered wholesale prices which could see corporate PPAs (Power Purchase Agreement) start to shiver as it becomes more difficult to sign agreements to finance future projects in the North of the country. Finding a deal that benefits both ends of the table has become hard. OX2 AB, a Swedish firm that develops, builds and finances renewable energy plants like wind projects sees stable PPA prices for its southern Swedish projects but they have had to change their prices through variable rates offerings on financing to succeed.

Prices are estimated to come back up in the middle of this decade especially on the backs of increasing fuel and carbon prices, rising electrification and demand growth, new interconnector capacity and a phaseout of nuclear generation. New PPA demand is now coming from companies with lower power needs, but high sustainability targets such as IKEA.

With Sweden pioneering renewables projects and investing heavily in this space, we see the lowered prices from this year's bad weather and bad demand as a potential preclude to gains in the coming years as prices grow and scales enable more exports to companies like the Google and Apple who have green goals in mind.

The first table below shows you some of the key statistics for the Scandavian block where Sweden represents the largest group in terms of population and Nominal GDP. While real GDP growth rates were negative during 2020, Sweden did comparatively well if we weigh in the size of the population. Considering low repo rates of zero percent, the consumer prices only grew slowly at 0.40% which protects for inflation going into 2021 as opposed to Norway and Iceland at 1.40% and 2.50% respectively.

Despite having maintained an open economy during the pandemic, Sweden saw a decline in private consumption growth from +1.27% in 2019 to -4.50% in 2020 which makes sense considering less disposable income as shown in our graph below. What is exciting is a 2021 forecast showing a private consumption growth above 2019 levels as well as disposable income growth from increased employment expectations. However, a 3.80% growth in consumption next year will not make up for a 4.50% decline in 2020, but the delta of -0.7% does not eradicate the growth from 2019 altogether. This tells us that a recovery is most likely to be complete in Sweden in a later period for example in 2022 when another 2.60% growth is added and the delta of -0.70% is erased. 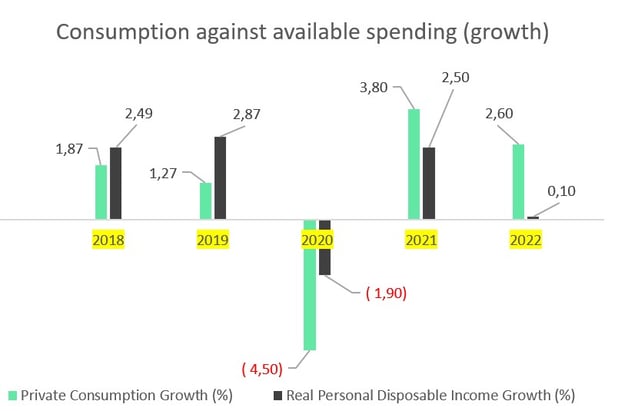 In terms of spending however, the Swedes have begun to swipe their credit cards at increasing rates according to Swedbank Pay and Research so the trend is going upwards on discretionary goods. 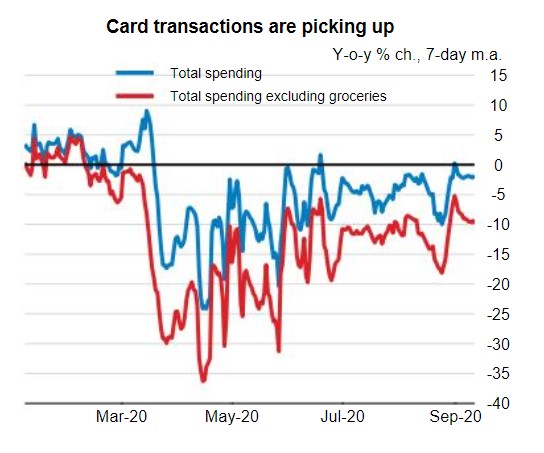 Employment was a priority for Swedes during covid-19 which is why they did not shutdown as many businesses, and the numbers show solid figures for both the business services side and the hardest hit industries namely retail, transport, food, and hotels. 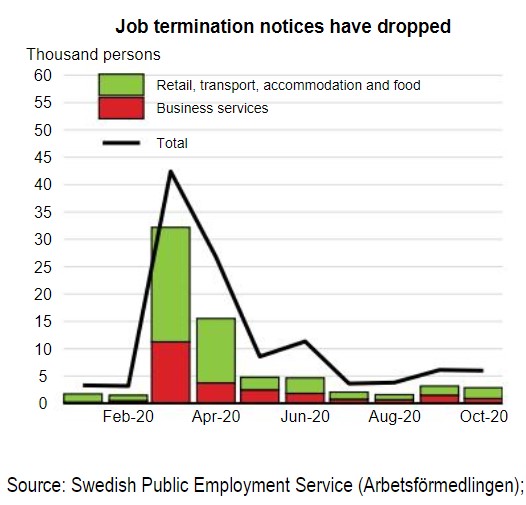 The Swedish government is planning to present a new 2021 budget bill close to SEK 105 billion or 2% of the GDP, reductions in employer social security contributions for businesses, lower income taxes, higher unemployment compensation. Municipalities will get additional grants to cover covid-19 related disasters and measures to invest more in the green economy will rise.

Unemployment rates did rise from 6.78% to 8.40% however the average monthly wages went up too from $4,400 to $4,600 (a trend that was already on the rise so this could be related to something other than unemployment benefits which is a great sign). Median annual household income went up $720 and banks show that gross personal income grew 1.23% during the pandemic.

Sweden did not shut down its borders during the pandemic and we suspect it was because of trade policy (to keep the machine humming). Sweden's trade balance has increased in 2020 from $18.55 Bn to $20.70 Bn meaning exports have been greater than imports during the recession.

However the whole picture is more mixed and according to Trading Economics there was a decline in overall trade over the last year (see next graph). August showed a negative trading position for Sweden of $-1.6 Bn followed by a spring upwards to end the year strong.

The falling figures are said to be a result from lowered trades into the EU. Top destinations for exports are Germany, Norway and Denmark in that order. They export refined petroleum, cars, packaged medicaments, fish, and wood.