The Swiss Franc has strengthened considerably versus the euro over recent months. Safe haven flows have lifted the currency and the Swiss National Bank appears more relaxed with a stronger Franc. But is a rate hike in Switzerland a realistic prospect for 2022?

The Swiss Franc a traditional safe haven, has been firmly in demand across the final quarter of 2021 and at the start of this year, as investors fretted, firstly over Omicron and its potential impact on the global economy, before Russia, Ukraine fears started to drive safe-haven flows.

Russia’s invasion into Ukraine saw EURCHF spike lower to 1.0280, a level that was last seen in 2015 when the SNB unpegged the Franc from the Euro. Switzerland, famed for its political neutrality has made the Franc one of the go-to safe havens as Russia heads towards Kyiv.

The rise of the Franc is interesting because the SNB has long used a -0.75% negative interest rate, in addition to currency intervention to limit strength in the Swiss Franc and protect Swiss exports.

A stronger Franc would push down the price of imports whilst hurting the Swiss economy by boosting the price of Swiss exports, potentially threatening price stability for the exporter nation. However, the fact that the Swiss Franc is trading at the highest level in years suggests that the SNB’s level of direct market intervention is slowing considerably.

That said, sight deposits held by the SNB increased in early January, which could be a sign that the central bank has resumed its currency purchases to restrain the Swiss franc. However, it could also be a return of cash to bank accounts following withdrawals ahead of Christmas. At the time, EUR/CHF traded at 1.0425 and the Swisse has continued to strengthen since. Sight deposits in February barely changed.

The broadly lower levels of intervention indicate that the SNB is more relaxed with the rise of the franc and is less inclined to rein in its value even as safe-haven flows boost CHF. 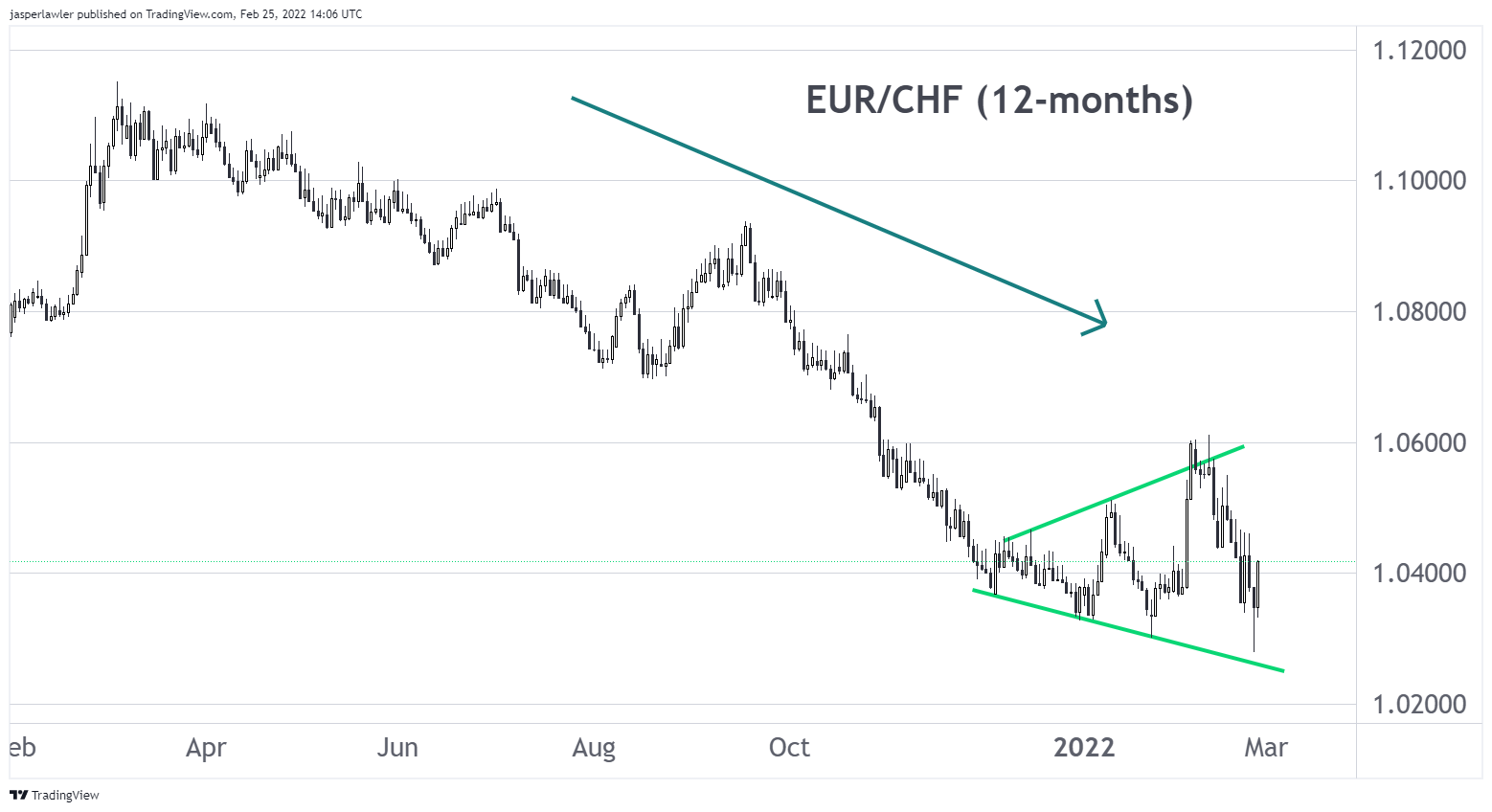 To understand why the SNB may have relaxed, it is useful to consider the economic backdrop in Switzerland and Europe and what other central banks, particularly the ECB and the Fed are up to.

Inflation in Switzerland, as measured by the consumer price index rose to 1.6% YoY in January, marking the highest level in over 23 years, and also taking the rate of inflation closer to the central bank’s 2% target level. Whilst the rise in inflation is notable, it is still within the central bank’s definition of price stability and is clearly not in the same league as the surge in inflation being experienced in the Eurozone.

The latest CPI data from the Eurozone revealed that inflation rose to a 3 decade high of 5.1% YoY in January and is even higher, at 25%, when producer prices are brought into the equation.

This high level of inflation in the Eurozone, compared to inflation in Switzerland reduces the negative impact of the stronger Swisse and lowers the euro franc fair value. Furthermore, central banks across the globe looking to tighten monetary policy takes the pressure of the SNB to act.

The ECB is not expected to raise interest rates until the final quarter of 2022, which suggests that the SNB could look ahead to 2023 for the first interest rate hike. The SNB are unlikely to act before the ECB, given that such a move would boost the franc, hurting the economy. Inflation in Switzerland is not high enough to create any form of panic at the central bank, which insists its dovish stance is still appropriate.

The next monetary policy assessment and rate decision from the SNB is expected on March 24th.

Where next for the EUR/CHF?

The SNB has allowed Swiss franc to strengthen below 1.04, which opened the door to the 1.03 level, which appears to be one of the last lines in the sand before parity. Some defence from the SNB at the level could be expected. However, Swiss franc-Euro parity might not be such a long way off and could be a reasonable target over the coming years.