Swiss Stocks: record high for the SMI could just be the beginning

A newfound interest in defensive growth stocks has contributed, among other things, to a soaring Swiss Market Index (SMI). The SMI is a quality stocks trade, with potential for a softer swiss franc to juice the gains assuming a full-fledged economic recovery.

The Swiss Market Index (SMI) has jumped to a new record high as Swiss stocks, and SMI futures are on an upward trend. Trading volume has been rising in previous days as investors begin to further assess the profit potential from the underlying defensive sectors of the SMI. The graphic below showcases the SMI over the past year, signaling a new record high in response to an improving Swiss economic landscape. 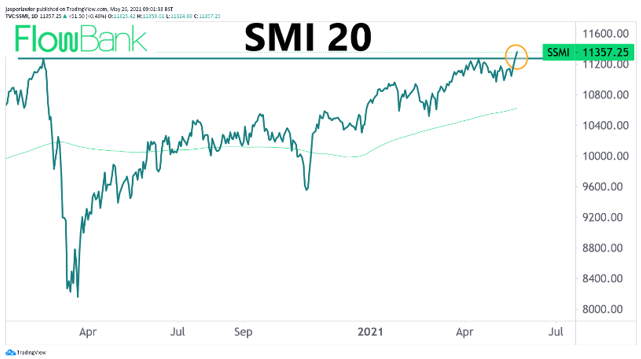 The swiss investor sentiment index run by Credit Suisse and the Swiss CFA society shows a 3.9 points growth over last month. Investors also say they anticipate further improvements, in things like the labor market as well as long-term interest rates set to rise (hence a good thing for a financials-heavy SMI).

The manufacturing PMI, meaning the metrics purchasing managers report, has also risen sharply to an all-time high last month. This signals a broad-based recovery in Swiss manufacturing that will likely remain in place for the foreseeable future as more orders pile up. Swiss output growth was the second-highest after July 2006 levels.

Furthermore, Switzerland has quickly ramped up vaccination efforts, with 49 doses administered per 100 people. This is less doses per 100 people compared to Seychelles, UAE and Israel, but the recent upswing from 30 doses per 100 earlier this month makes for a compelling break.

What is the SMI made up of?


Not to be confused with the more cyclical, industrial SPI, the SMI is a blue-chip index composed of 20 major Swiss firms. The index is offered on the SIX (Swiss exchange) and famous stocks like Novartis, Roche, UBS, Nestle and Swiss Re exist on the index. The last year has seen a 16.71% return, and 5.94% so far in 2021. As of this writing, the top five performers are SGS, Swatch, Richemont, Alcon and Givaudan. Top three holdings by weighting are Nestle (19.26%), Roche (17.18%) and Novartis (16.85%). 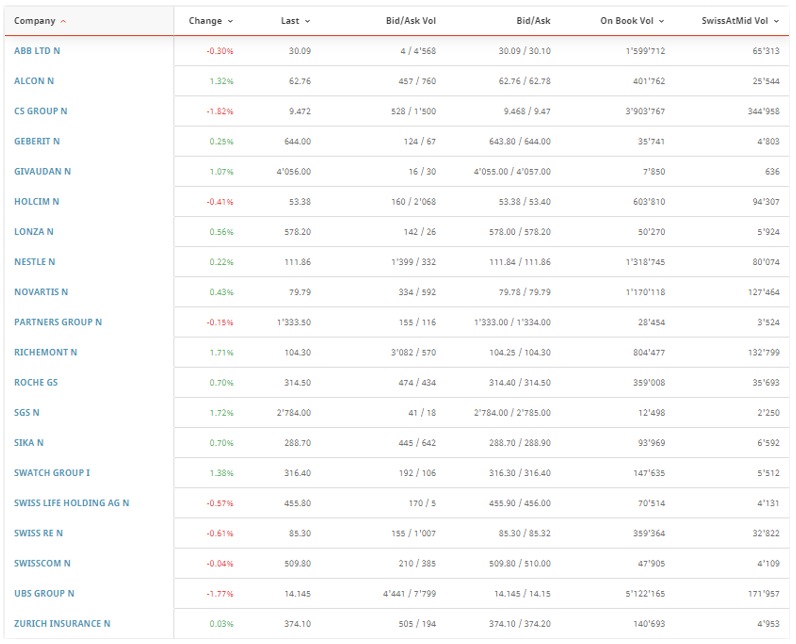 Which sectors does the SMI represent?


The Swiss culture is known for its quality and longevity. From diplomacy, banking and watches in Geneva, to the best skiing in Zermatt, all the way back to Basel where our medicines are made, and Zurich where the best (and most expensive) insurances are from, the swiss seldom disappoint.

The SMI reflects this reality in that firms like Roche and Novartis are some of the most steady dividends aristocrats out there, just read our research on Novartis to know more. The SMI heavily prioritizes the healthcare sector, something the graphics below only makes more clear.

This is because the Swiss have a comparative advantage in both pharmaceutical infrastructure and brain power for IP development. This control over medicine production means the Swiss do not lie when they promise security to their citizens, and thus investors can somewhat rest assured.

On the right below, is a graphic showing the weight by price the healthcare sector has on the SMI. On the right, we see pharma makes up 37.5% of the offering.

The investment rationale behind the SMI is two-fold: one, the real Swiss economy is picking up steam (employment up, CHF at three-month high, PMI at record high) and two, SMI holdings fit the ‘’job description’’ for a rotation trade. Think of these categories that are present in the SMI:

Growth in industrials, and banks has risen across the board since February, partly due to them benefiting from rising rates, and prices. Pharmaceuticals are also clear winners when it comes to the vaccination business, and related biotechnology and genomics TAM is around $1T according to Bank of America research, which could indicate more to come in Swiss medtech (despite the news seen below).

Something very important to take into account is the Swiss Franc—taking the currency into account when looking at the SMI makes for an even more compelling story. If you calculate total SMI return including CHF strength we’re looking at better returns for international investors than in local currency returns. With the world’s strongest currency by price parity measures, if we see a global economic recovery, the Swiss Franc is expected to weaken, which would help exporters. However, because of much better Swiss economic fundamentals compared to the EU and even US, this weakening Swiss Franc hypothesis is not set in stone.

Compared to the SPI which is more oriented towards cyclicals like industrial stocks, you should look at the SMI as a quality stocks trade.

Switzerland’s government decided today that it would drop a stalled treaty with the European Union amid domestic opposition to an agreement that would have simplified and improved ties. There remains substantial differences between the two parties on key points and while the EU-Swiss economic ties count over 100 bilateral agreements, this failure to strike a deal blocks any new Swiss access to the single market.

More significantly to the SMI, existing accords might erode going forward including an agreement on cross-border trade in medical technology products. The Swiss medtech sector is a huge economic force behind the Swiss economy and SMI, representing 1,400 companies, companies exporting more than $5.6 billion (CHF 5.0 billion) worth of products to the EU per year.