Tesla beat Wall Street estimates and reported better-than-expected results for the first quarter of 2022, defying production disruptions due to the Covid measures in China, the global supply chain crisis, and the crisis in commodity markets. Although the company has warned that supply chain issues could slow deliveries this year, Elon Musk expects deliveries to increase by 60% during 2022 and by 50% in the coming years. So far, he has kept his promise.

Investors were tense ahead of the results, as the closure of the Shanghai Gigafactory, rising raw material costs and global supply chain issues - which led Tesla to raise the price of its electric cars, could have weighed on the company's results. And they probably did, but Tesla came out of it with its head held high and exceeded analysts' expectations on both earnings and revenue.

The company reported a record first-quarter revenue of USD18.8 billion versus analysts' expectations of USD17.9 billion and earnings per share of USD3.22 versus USD2.27 projected. Profit was up 658% compared to the same period last year. Despite the slowdown due to the war and pandemic, the first quarter of 2022 was a solid quarter for Tesla.

However, the company cautioned investors: 'Supply chain challenges remain persistent, and our team has been working through them for over a year. In addition to chip shortages, recent outbreaks of COVID-19 have impacted our supply, and factory operations'.

The good news is that production at the Shanghai factory is starting slowly, even if it means employees have to sleep on site, and Tesla says it is able to catch up with the Austin factory and the brand new factory near Berlin.

ITesla has done better than its competitors in the difficult environment of chip shortages.

In fact, the company internalised software writing well before the pandemic, allowing it to adapt its code to the chips available on the market rather than waiting for those that are not available. As a result, the chip shortage is not slowing Tesla's deliveries as much as it is for other carmakers. While the company was criticised for insourcing software writing a few years ago, this decision has proved particularly effective in dealing with the global shortage of chips since the pandemic began.

The market for industrial metals has been tight for some years, and has become even tighter with the war in Ukraine. Geopolitical tensions with Russia, one of the world's largest exporters of industrial metals, have taken their toll on commodity prices.

Nickel prices jumped 250% in March on the London Metal Exchange, triggering massive margin calls, pushing investors out of their positions, and drying up market liquidity.

The prices of other metals needed for the construction of electric batteries, such as aluminium, palladium and lithium, have also risen sharply. 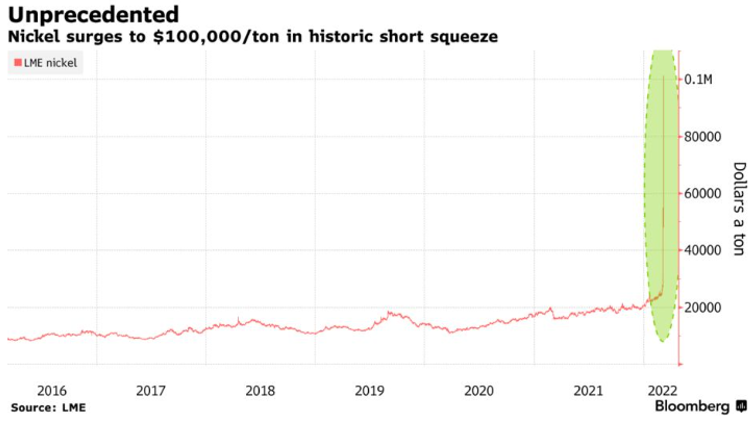 Nickel price increased by 250% in March.

However, Tesla was little affected, and for a reason. Recent reports suggested that the company had entered medium-term contracts with metal suppliers such as Canada's Vale, to ensure a fluid supply in the medium term as Elon Musk was worried about not having enough nickel for his batteries long before the Ukraine war began.

Passing on inflation to customers

More importantly, Tesla has been able to pass on higher production costs to its customers, as despite the higher price of its electric cars, the company delivered 310’048 cars in the first quarter, a record for the company.

However, Tesla's technological edge, its ability to maintain rapid growth despite a challenging market environment and its ability to pass on higher production costs to its customers could keep the share price rising in the coming quarters.

Tesla's Bitcoin holdings, which amounted to USD1.26 billion in the first quarter, are considered by Ark's pricing model, although these holdings are not considered a key element of the forecast.

However, other factors that could contribute to a better valuation of the company, such as its energy storage technology, artificial intelligence as a service and a humanoid robot are not considered by the valuation model.

18 out of 41 analysts in the CNN Money survey favor Tesla stock. The median price predictions from 41 analysts suggest that Tesla's share price will rise to USD1,103 over the next twelve months. The highest prediction reaches a price of USD1,580, while the most pessimistic estimate is USD67 per share, which seems unrealistic.