Tesla is much bigger than you might expect. Its recent entrance into the S&P 500 is both symbolic of a changing world, and a testimony to the success, and future of EV.

Tesla’s mission is to accelerate the world’s transition to sustainable energy. It produces a variety of cars and trucks, the Model S, X, 3, Y, a Semi truck to revolutionize the shipment industry and the Cybertruck. Tesla operates a large amount of factories, including its famous Fremont, Texas, Berlin and Shanghai factories and many more across the US and globe. Tesla goes full circle with its manufacturing of sustainable energy ecosystems; its Powerwall, Powerpack, and Solar Roof help homeowners partake in the future of residential energy use. Here are the geographic regions in which Tesla derived its revenue in 2019 according to the latest 10-Q. Scandinavia is a big fan of Tesla:

While Tesla is renowned for its software in self driving technology and energy storage R&D, it derives most of its cash from its automobile division. Its energy segment has grown a lot in the past couple of years, and could prove to continue on this trend. However, Tesla does not derive enough profits relative to its automotive segment to justify shifting focus more fully towards its energy division.

Tesla has a variety of costs to run its business including R&D, maintenance, production costs, and on goes the list. While its expenses have increased on average over the last year, Tesla has successfully managed to bolster its revenues and profits enough so that as a percentage of the revenue, costs have actually shrunk. This means that revenues and profits have grown at a faster rate than costs.

The following graphs will show you better than words the top ten players in the automobile space against which Tesla competes. They have unique characteristics, advantages and market exposures. The following graph compares the firms by market size (the stock price times the number of outstanding shares) where Tesla's market cap is equal to $616 billion representing the lion's share of the EV market today; 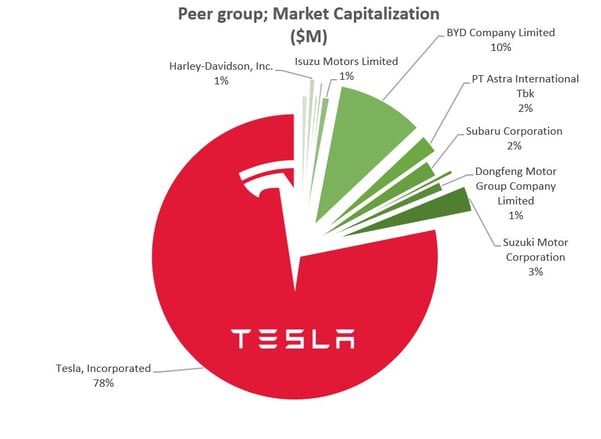 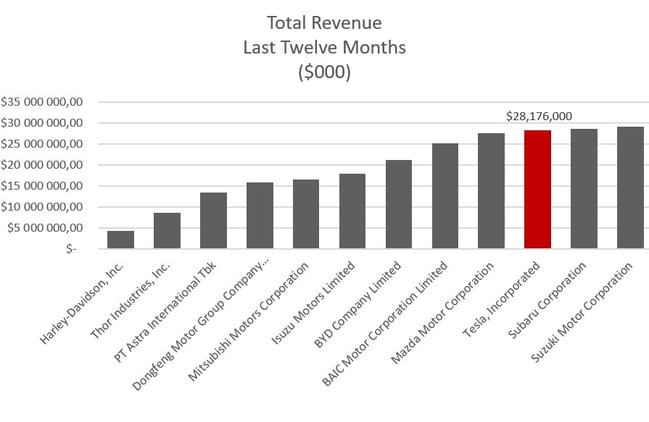 Net income performance shows that there are more companies with lots of resources to invest in new projects, or pay dividends than Tesla. However, Tesla is probably more exciting in terms of growth, considering that 2020 was a benchmark year for profitability. The firm had negative net income margin figures until 2020 so this is a turning point in the life of the EV giant.

Tesla competition within the EV space

Tesla faces strong adversity from a growing list of competitors especially in the entry-level premium sedan, and compact SUV markets. Competitors are BMW, Ford, Lexus, Mercedes, Volkswagen group, and Volvo. Beyond the automobile segment, Tesla's energy storage segment is under pressure from long-term exposure to utilities competitors decreasing costs, and prices in the long-run. This reality could increase residential customer defaults under Tesla’s current leases agreements.
According to McKinsey, Automakers plan to introduce around 450 additional EV models by 2022 with German producers potentially outproducing their Chinese counterparts (though not by Market Capitalization) as indicated above.

Tesla proved in 2019 that its brand was top of the line, ripping away from Chinese counter-part BYD and taking a decisive lead in the run up to 400,000 units per year produced. The Chinese are probably more of a threat to Tesla than the Germans in terms of market share competition, which is why Tesla will most likely attempt to improve its position in China in 2021. While Tesla excels as a stand alone EV player, the firm will eventually face an increasingly concentrated and saturated market as more players come in to grab profits. 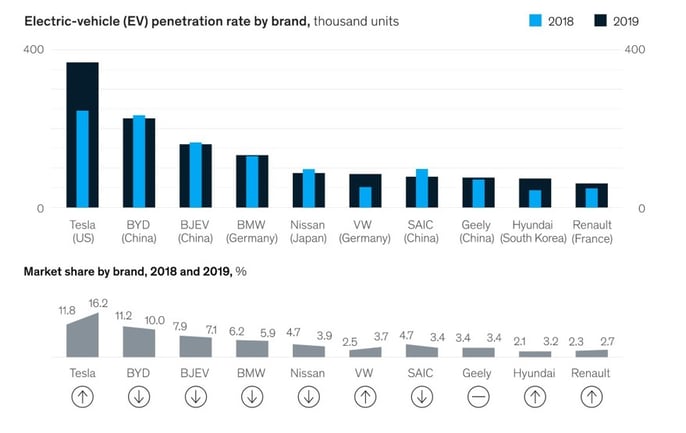 Tesla’s advantages can be identified as the following;

Cashflow from operations indicates the money made from running the business i.e. from selling the good or service. Tesla used to lose money in 2016 and 2017 compared to earning positive figures in the following years.

Tesla’s earnings per share ratio was positive for the first time this year, which indicates that the company is now profitable. Usually a positive number means that the company is in decent standing all things being equal. The price to earnings ratio, which indicates the price investors are willing to pay for a dollar of current earnings is 229.2 which compared to an industry average of 88.4 is outstanding. In terms of stock valuation this could either indicate an overvalued stock, or that investors are confident in the company.

Here is a graph of the Tesla stock market price performance relative to its industry and the S&P500. 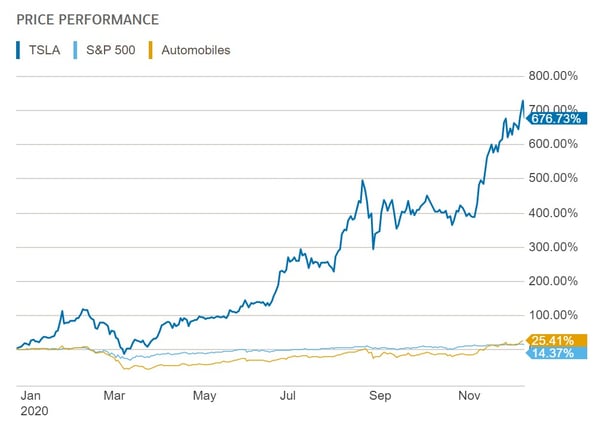 Foreign currency risk; Tesla recognized a net foreign currency loss of $144 million in September this year. This makes sense considering a weakening dollar and half of their business revenue coming from outside the US in Euros, Yuan, and Canadian dollars.

Legal proceedings at Tesla are;

2. In Germany, a fine of 12 million euro was issued for non-compliance with end of life battery obligations.

Macroeconomics related to covid-19; Operations were temporarily suspended at factories in Nevada, furloughs increased, DMVs closed (where you register vehicle in the US), spending was down, and car usage and purchases was down.