Tesla in China: romance or no chance?

Tesla leads the EV pack for now, but its entrance in China will not come unchallenged. In seeking out the world’s largest EV market, Tesla will face both the present and past.

Recently built in December of 2020, the Shanghai factory has already churned out impressive figures. In April, according to its latest 10-Q, Tesla fully repaid the $614 million in aggregate principal of its secured loan facility in connection with the construction of its Shanghai Gigafactory. The factory was also granted a 15% corporate tax rate, which is a 10% discount from the 25% statutory tax rate in China. Welcome to China, Tesla!

Because the Chinese government is keen on reducing fossil-fuel output by 2040, efforts have been made to heavily subsidize EV production throughout all of China. This is why Tesla has opened up multiple centers beyond large cities to China’s ‘’lower-tier’’ (smaller markets) cities like Weifang and Linyi in northeastern China. It looks like Tesla’s future will be deeply intertwined with China, at least according to Tesla who thinks shares of sales will disproportionately grow on their Eastern front.

In 2020, Tesla China Model 3 retail sales came in at 138,000 units, or 1/8 of all EVs sold nationwide according to China Passenger Car Association. This was the single best-selling premium EV model sold in China in 2020.

China Model 3 sedans have seen higher profit margins than in the US, and could make up more than 40% of sales by early next year (current make up is 29.29% of sales vs 42.58% in the US). According to their latest 10-Q, gross margins for China automotive sales are 26%.

The firm states improvements of Model Y and 3 gross margins are primarily related to lower material, manufacturing, freight, and duty costs from the localized procurement of their local Chinese operations. This has pushed down the Model Y average costs per unit drastically.

With the launch of the Model Y earlier this year, and as its first local-made SUV product, Tesla China’s addressable market and competitiveness will increase further in the medium term. In the first stage, Tesla China plans to originate NCM batteries from LG Chem, while CATL is most likely to be the battery supplier on the Model Y going forward. Rumors suggest the Model 3 and Model Y share certain auto parts and it is likely that the pricing could be lower as the volume increases on both models in China.

Tesla already sees the benefits of its plant investment, saving on currency exchange fees, import costs and materials. This is a significantly successfully move for Tesla and as the Model Y production ramps up. China will continue to grow as a major account for the EV firm.

Furthermore, over the past couple of years, there has been an increasing number of Tesla sales occurring outside the US, with China becoming an increasingly active market as shown below:

Revenues from Chinese Tesla sales are increasing over time 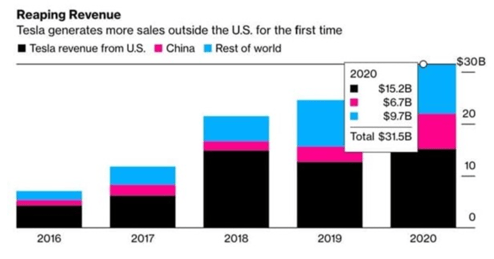 Local players Nio, Xpeng and Li Auto are increasingly grabbing market share. While altogether they only represent Tesla’s monthly total sales tally, they are starting to put pressure on the EV giant. Tesla’s most aggressive competitor Nio has steadily increased sales of SUVs in the region at a price undercutting Tesla’s Model 3 brand.

Tesla differentiates itself from Chinese counterpart Nio with a uniquely strong powertrain, autonomous driving technology, and a reputable brand offering across the globe. Nio offers good services with Nio House and Space, they have more solutions to reduce range issues like charging stations, charging trucks, and they are unique in their infamous battery swapping stations.

Tesla is working on building out charging stations in China to better compete, but this endeavor will be hard to roll-out and if it fails, could represent a major risk for the firm’s Chinese operations. The graphic below further sheds light on the competition Tesla faces in China from Chinese EV players. 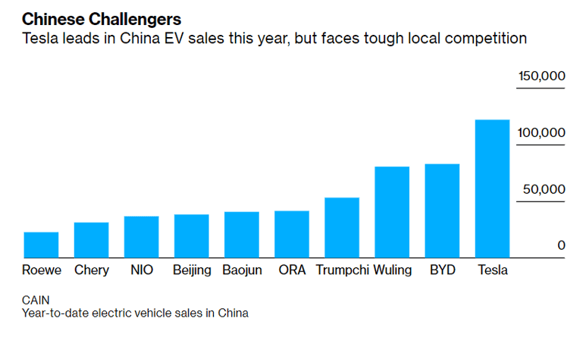 According to McKinsey, total EV sales reached about two million units in 2020. China and Europe are the two leading markets accounting for roughly 80% of total sale, with China taking the lion’s share of 50% of total sales. While the graphic below shows a doubling in sales of EVs in Europe during the pandemic, China has a resounding lead—which is even more interesting for Tesla.

In absolute numbers, China will probably not be surpassed by other markets in the future, considering population size and a growing middle class. In 2030, EV sales could reach about nine million units in China alone, equivalent to a CAGR of 24%. Drivers behind this kind of growth include the extension of state sponsored subsidies until at least 2022, and a continued push for EV adoption among Chinese citizens and ride-hailing businesses. The following graphic shows last year’s already promising Chinese buyer climate for EVs.

Threats from the past

While Tesla leads the EV space by market share, conventional players have unarguable advantages in vast dealerships, service provision, supply-chain networks and of course, mountains of cash and the ability to issue corporate bonds to quickly raise funds to leverage on market entry tactics such as marketing and PP&E expenses.

The Chinese government is attempting to lure consumers into its zero fossil-fuel policy objective. Their target is to have EVs account for 20% of the entire vehicle market by 2025, up from about 5% seen today. Tesla will continue to be faced with a swamp of competitors. After showing the way, it will have to fend off its customers with cars more suited to local demand.

One such demand consideration regards design. As the Chinese government lifted the maximum two child policy to three, working adults will be looking for family specific vehicles that are more spacious and suitable for kids.

While Tesla continues day in day out to showcase the most highly rated car by safety standards, it will be wise to tend to families with added space—something Li Auto is more in tuned with according to Lu Bin a fund manager at HSBC Bank.

Tesla has since April been subject to two controversies in China. The first regards cameras usage as a surveillance security issue for the Communist Party, and the second regards a Tesla catching on fire in a parking lot. Alongside cut throat competition coming from the past and from Chinese counterparts Tesla now has to tidy up its reputation before consequences begin to pile up too high.

In fact, the consequences are already quite clear. Sales plummeted after a March high to a low not seen since last summer. This is not exactly a seasonable trend... As China continues to see figures rising from Chinese revenues, it ought to make sure to maintain a solid grip on the market and solve such issues. Some critiques of the auto industry have pointed to this sort of mistake by the EV giant as a typical leader's dilemma. Tesla, leading the way, makes the mistakes other EVs can learn from. It said that in the history of cars, the last one standing usually is not the founding company. 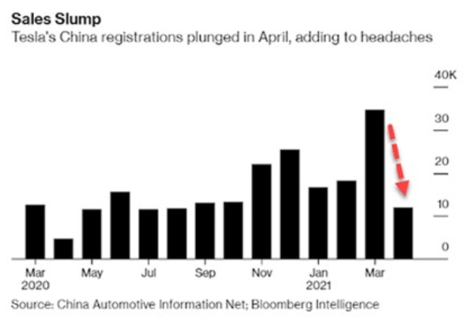