The case for Dow 40k

The Dow Jones Industrial Average hit 30,000 for the first time this week. We outline 7 reasons the Dow could hit 40,000 and 5 risks that stand in its way. 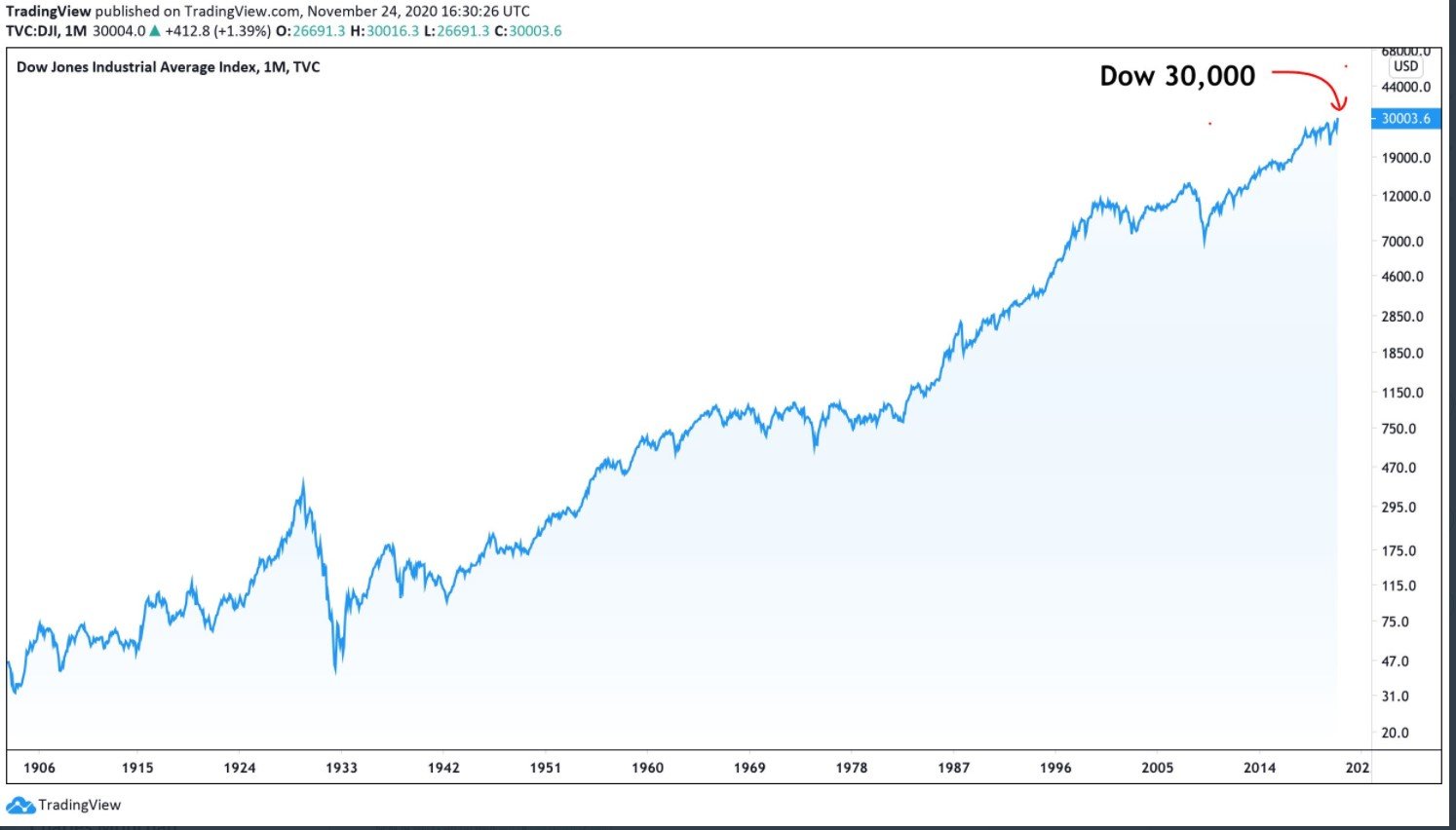 Using a logarithmic scale, it can be seen that the sharp fall this year barely scratches the surface of the century-old bull market.

The specific trigger for the Dow to finally push through the big 30k figure appeared to be the Trump administration allowing the formal proceedings for the Biden transition process to begin. Trump had been delaying the transfer of power while filing lawsuits in several states over alleged election fraud. That came on the back of news that Joe Biden had nominated former Fed Chair Janet Yellen as Treasury Secretary. Yellen kept monetary policy very easy at the Federal Reserve and it is thought she might lean towards big spending at the Treasury, while working closely with her former colleagues at the Fed.

The removal of the uncertainty around the US presidential election and the advancement of covid-19 vaccines is reviving economic optimism for next year. The demand from investors has been strongest for economically-sensitive cyclical stocks like industrials found in the Dow.

A rise from 30,000 to 40,000 is of course a rise of 1/3rd in the value of the index. The Dow lost nearly 40% in its March slump so such moves can and do happen – but typically much more quickly to the downside than upside.

If there is to be a bull market in 2021 and beyond, there are some reasons to think that the Dow could be one of the biggest beneficiaries because of its makeup. The Dow is composed of mostly ‘old economy’ value and cyclical stocks with the notable exception of Apple (AAPL). If the economic cycle is turning more positive, these stocks have room to catch up with growth stocks that have performed best under lacklustre economic growth.

Corporations heavily slashed dividends in 2020 to offset likely big drops in revenue from when economies were locked down. Assuming the economic recovery continues with the aid of stimulus and vaccines, dividends will expanded again - especially among Dow components, most of whom pay out a dividend.

There have been net outflows from mutual funds this year, corresponding to rise in cash being held in money market funds. ETFs have been the main vehicle for investment likely thanks to the greater liquidity. If this money is redeployed into the market once there is some more certainty about the pandemic, that would further lift markets.

The Fed plans to hold interest rates near zero until 2024. So for the next three years at least, it will not be possible to make a return in money markets and the yield available in bond markets will continue to very low by historical standards. That means the stock market continues to be ‘the only game in town’ notwithstanding commodities and cryptocurrencies, which also stand to do well.

The argument that it has been the absence of government spending since the financial crisis that has led central banks to intervene so heavily in the economy is starting be heard in Washington DC as well as other parts of the world including Brussels. Government investment in infrastructure should naturally benefit industrial stocks.

Assuming a Republican Senate at least until the 2022 mid-term elections, means that Donald Trump’s corporate tax cuts are here to stay. But the destabilising trade war with China is expected to dial down with sanctions likely to be removed in Biden’s first year in office.

This last point is perhaps the most disagreed upon, but the rise in the price of commodities, as well as cryptocurrencies would suggest markets are pricing in some inflation and/or a devaluation of the US dollar in the coming 12-18 months. When the price of money is rising, stock prices tend to rise too in order to hold their value.

There is near-term and long term risks to the Dow Jones reaching 40,000. 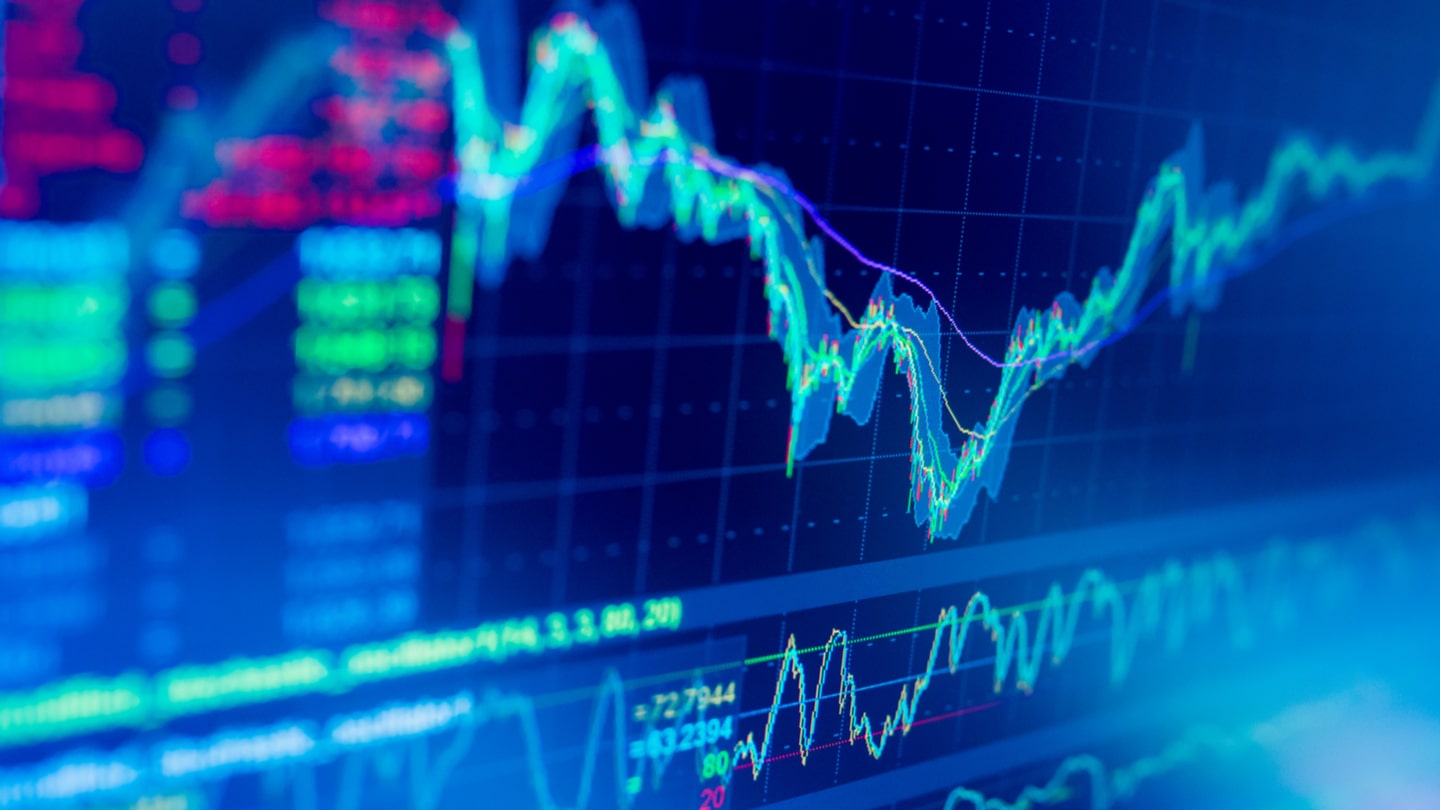 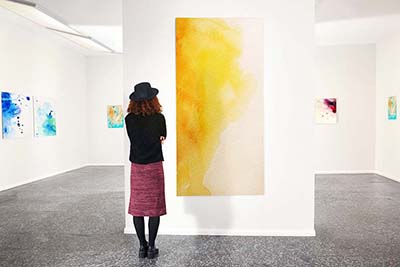 The effects of Covid-19 on the art market