The ETF industry continues to reinvent itself

There is only one step from traditional funds to ETFs. This is what the American fund manager Dimensional Fund Advisors has just demonstrated.

The Exchange Traded Funds (ETF) industry is booming, with record inflows year after year. A trend that shows no sign of slowing down, as over the past 15 months, ETFs have raised $900 billion in the U.S., while mutual funds have experienced redemptions of nearly the same amount.

Dave Nadig of ETF trends is one of the industry's pioneers. According to his forecasts, ETF assets under management are expected to exceed those of traditional funds by 2027 (see chart below).

Will ETF assets under management ever surpass those of traditional investment funds? 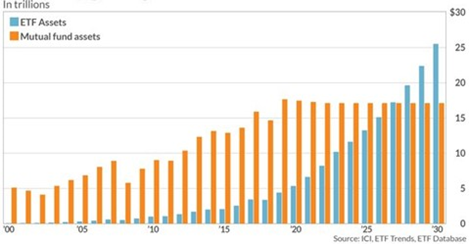 When the very first trackers were launched in the 1990's (remember the SPDR S&P 500 in 1993), ETFs were primarily seen as tools to replicate major stock or bond indices. However, ETF asset managers are constantly reinventing themselves. New indices are constantly being created; there are now more indices than listed stocks. Smart beta ETFs have attracted a more sophisticated customer base, while thematic ETFs are attracting an ever-wider investor base. Whereas ETFs were once purely passive management products, many ETFs are now actively managed. They allow managers to offer investors the best of both worlds: a simple, liquid, low-cost tool whose performance relative to the index can be improved through an active management process.

The structure of non-transparent active ETFs is very appealing to many managers from the traditional fund management industry.

A new step in innovation was taken in 2020 with the arrival of active non-transparent ETFs (sometimes called "semi-transparent"). The aim is to offer a dedicated ETF structure to active managers who do not wish to reveal their entire management process or the composition of their portfolios. This structure helps attract the skills of sophisticated managers to ETFs - a move seen by some as a new step in the democratization of finance.

This new type of structure - whether in a semi-transparent or transparent form - is very appealing to many managers coming from traditional fund management (and therefore from so-called active management). One of the biggest success stories of 2020 is to be credited to one of the most transparent managers in the financial markets, Cathie Wood of Ark Invest. Her huge commercial success has not left competitors indifferent and has helped to create a new phenomenon - the transformation of traditional investment funds into ETFs.

Last month, the American fund manager Dimensional Fund Advisors (640 billion in assets) converted four of its mutual funds into ETFs. These are active management strategies on US equities but also emerging equities. Two other funds are expected to undergo the same fate in a few months.

This is not the first time that such a transfer has taken place. The managers Adaptive Investments and Guinness Atkinson had taken the same path for some of their funds earlier this year. But the amounts under management this time are much larger. While the managers mentioned above had only transferred a few hundred million, the four DFA funds hold nearly 30 billion in assets. As an immediate consequence of this conversion, DFA has moved from 50th to 13th place in the ranking of ETF managers by assets under management (see table below). 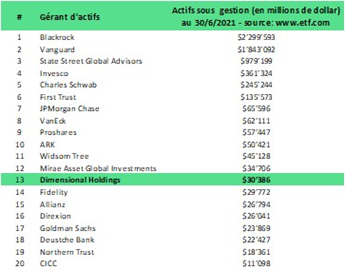 Size is of course a very important criteria to become profitable in the ETF industry. These instruments are differentiated by very low management fees and managers can only amortize fixed costs by reaching sizes per ETF that often exceed $1 billion in assets under management - or even much more in the most competitive segments.

Only a few giants are profitable today - these include early entrants such as Vanguard, Blackrock (iShares) and State Street. Others have been much less successful in this business. For example, Franklin Templeton launched its first ETF in 2013, but still hasn't broken the $10 billion mark (even when combining the assets under management of the ETFs acquired following the merger with Legg Mason).

Today, only two or three decent-sized players are not yet owned by large groups.

The leaders therefore have very high barriers to entry. And for asset managers looking to break into this industry, there are not many options.

One option is to buy an established brand and grow it. This is the strategy that Invesco followed at the time by buying PowerShares or Mirae via the acquisition of Global X.

But the supply of potential targets is very limited. Today, only two or three decent-sized players are not yet owned by large groups.

Another possible strategy for established asset managers is to launch a dedicated brand. This is the tactic that Northern Trust has implemented with some success with the launch of FlexShares. In this case, a large part of the assets come from the parent company's existing clients. This is a sine qua non for ETFs to ever have a chance of reaching critical mass.

Apart from these two options, the conversion of traditional investment funds into ETFs is therefore the only remaining possibility - and potentially the one with the best chance of success.

The strategic turn taken by DFA could therefore be emulated.

Among the asset managers likely to consider a similar strategy: those who already have ETFs in their ranges but do not yet have the critical size. According to the website www.etf.com, Franklin Templeton, T. Rowe Price and Columbia could be tempted by such an operation - at least for some of their funds.

The idea is for these managers to adapt to the preferences of the new generation. Indeed, demographics show that investors under the age of 40 are much more attracted to ETFs than to traditional mutual funds. For some analysts, "pure" traditional mutual fund managers may even disappear in the next ten years. It is therefore necessary to adapt one's product range to this new paradigm.