The European technology ecosystem smashed records across the board in 2021, with valuations following suit. Is this surge in European unicorns sustainable?

There was a surprisingly high number of unicorns (startups worth USD1 billion or more) spurring up all over the old continent in 2021, a rather new phenomenon. Europe is now home to 321 billion-dollar “unicorn” companies, 98 of which were minted in 2021. There are also 26 so-called “decacorns” worth $10 billion or more, including Klarna, Revolut and Checkout.com. European unicorns thrived during the pandemic, pushing for aggressive growth strategies, going on hiring sprees and opening operations to the world. The question is whether this growth can be sustained.

Dealmaking was on a frenzied path because of large scale FOMO from investors who have been competing to get in on some of the best deals, and because firms have been burning through cash at a faster pace than usual due to pandemic-led growth. A large amount of new funds was created to chase the DeFi spring up, often started by foreign asset managers seeking outlier returns in the VC world.

Other factors, including regional expertise, helped unicorns emerge across the continent —think Berlin, London, Paris. People are migrating to such regions to find well-funded startups that can pay good salaries, offer promising equity pools, and hard and meaningful projects.

Europe could be the next Sand Hill Road. Europe’s macro moat is believed to be in its different cultures, skillsets, languages, and this has attracted the attention of many investors. This gravity comes from the recent surge in big unicorns, from Sweden for example, a place better known for Ikea, H&M and Volvos, and not so much for VC. Today, Sweden’s Klarna is one of Europe’s biggest startups, and battery developer Northvolt raised one of the largest rounds (USD2.75 billion). But Europe has seen other giants come into the spotlight with the likes of Lithuania’s Vinted, Estonia’s Bolt and Netherlands’ Mollie. Other notable deals include British fintech firm Wise’s blockbuster direct listing and Finnish food delivery company Wolt’s $8.1 billion sale to American rival DoorDash.

Europe also saw massive rounds being raised in Q3 with Gorillas taking the lead. The following group of startups have seen the wildest run up in 2021, contributing the most to Europe’s boiling startup scene.

These are levels comparable to American rivals, which are famous for high valuations due to easier access to venture capital. But the opaque nature of private markets has also raised questions around large valuation step-ups. Unicorns’ financial statements are not subject to the scrutiny publicly-traded companies face, a recurring reason for such high valuations—some even call them inflationary ‘’inaccuracies’’.

As mentioned above, the demand for early-stage tickets has surged as more investors seek returns in this inflated environment. As the US VC environment has blossomed, opportunities abroad have become relatively greener, which has led US investors to European markets, increasingly building out European branches to go after cheaper assets.

Despite Brexit, the UK and Ireland remain one of Europe’s best spots for VCs to invest in high growth technology companies. A liquidity-fueled market has bolstered, but what we think is happening here is just the start of a new normal. The UK may benefit from its proximity to the US and the shared language because the median pre-money valuation for late-stage startups soared to €15.8 million euros. What matters for this region however is the growing trend from 2013 lows.

The DACH region also stands out, but it has seen a less tumultuous political environment then the UK, with Switzerland offering the lowest country risk next to Luxembourg. Perhaps because of this, DACH’s valuations have enjoyed a greater later-stage median of EUR17.5M. Austria was a standout, when Vienna-based cryptocurrency trading platform Bitpanda announced a $263M series C, propelling its valuation to $4.1B, and after GoStudent raised $244M for a $1.7B valuation.

The exit landscape in Europe was evidently strong in 2021. The overall exit value in Europe reached EUR115 billion blowing past the previous best of 2018 which then saw EUR42 billion. The pandemic forced consumers and businesses to survive by going online, which saw VC backed technology startups’ customer bases, CAGRs, and ARRs explode, as seen with Sportradar, Wise, Cazoo, and Lilium. 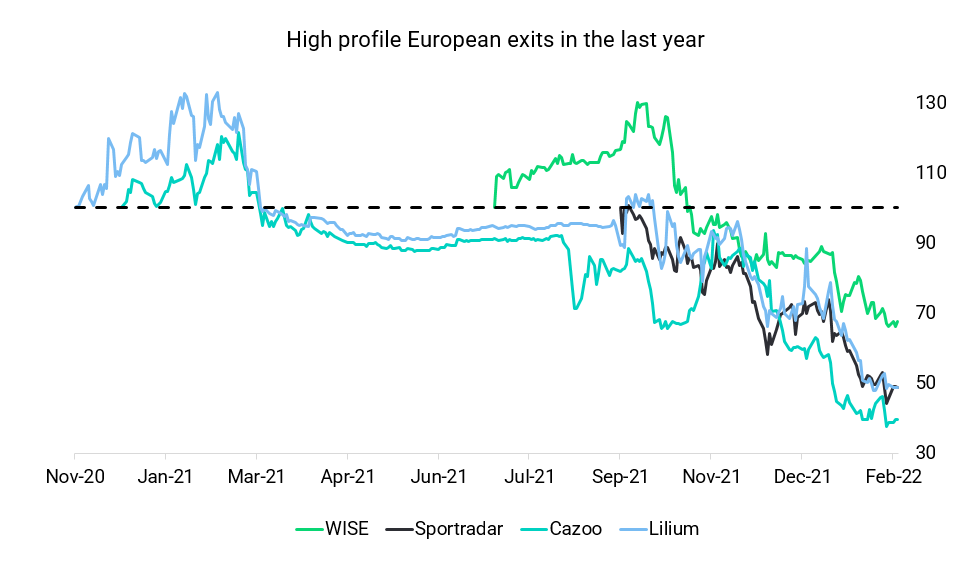 Some of these companies have benefited immensely from lockdowns and work from home measures. As such, the threat could be the reopening. Still, such momentum may not slow quickly, and any change brings along a window of opportunity for thriving the tech sector.