Chinese tech stocks are experiencing a sell-off as concerns around regulatory crackdowns continue. To understand what caused investors to doubt their tech holdings, let’s have a look at the Chinese tech industry itinerary that led the country to a market crash!

The turbulence began following the interruption of Ant Group’s IPO, which was scheduled for November 5, 2020. The Chinese tech group formerly known as Ant Financial was created by Alibaba’s founder, Jack Ma, and offers services such as online payments, financing, or insurances services. However, the introduction of new lending rules threw the company’s listing into disarray which made financial authorities halt the offer and brought along concerns about tightening regulations that tech firms particularly fear. The company willingly pulled its listing in Hong Kong two days before the scheduled date, a never-before seen event which announced the beginning of the journey to the crackdown.

The regulatory landscape of tech in China continued to change after Beijing’s cyber watchdog had fined and warned several of China’s biggest technology groups about anti-competitive practices aiming to stop monopolistic behaviors. Companies such as Tencent, ByteDance, Meituan and Alibaba were given an amnesty to conduct self-audit of their operations and rectify any problems. Here are some examples of the issues that had to be solved:

Behind these accusations stands the Regulators’ will to ensure an open ecosystem where sharing is allowed, and customers do not have to choose between two. Thus, eliminating the eventual duopoly that was getting formed with the main players, Alibaba and Tencent.

Firms have been considering overseas listings as a way to raise money, however China’s cybersecurity watchdog had other plans for them, delaying their arrival in the U.S. stock exchange. One of the latest examples that shook up all tech companies was the delay of Didi’s overseas listing. Indeed, the Cyberspace Administration of China (CAC) raised questions about the security of Didi’s network, expressed concerns about the sensitivity of information displayed on its mapping function, and cautioned the company to delay its listing until it could conduct a thorough internal security review. One day before trading opened in New York the CAC announced the investigation into Didi and instructed all Chinese app stores to remove Didi's app, making its share price drop drastically. Needless to say, the event did not help to sooth the already tense atmosphere. The cloud of uncertainty is far from letting the sun shine as the prospects of foreign IPOs do not seem to be promising with regulators blocking overseas listings. But that is not it! Let’s see what happened with the education sector. 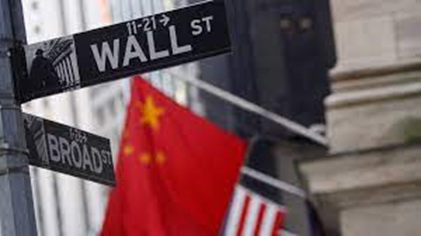 The government was not done with disrupting tech companies as it still hadn’t played its hand. New restrictions for the private education business have been established by the latter. The rules include requiring tutoring and education services companies to become nonprofits, prohibiting core-curriculum tutoring (aimed at passing exams) on weekends and vacations, and prohibiting foreign curricula or hiring foreigners to teach remotely from outside of China. These measures reflect China’s goal to ease disparities between the lower/middle class and the upper one. In China, to get into college, students must pass an examination that they prepare by attending costly private after-school classes. This issue has created corruption as even some public teachers make their student pay to have access to the entire program. This final regulatory change rang the bell for China’s tech companies and translated in the following way:

These events slowly but surely brought chaos into the Chinese market. The regulatory moves have hammered stock prices in the $120 billion education sector. New Oriental, a firm that dominates English-language learning, plunged from a high of $19.68 on the New York Stock Exchange in February to a low of $2.18 last Friday. The new rules make EdTech companies have little choice but a desperate pivot from their original business plan. All 10 industry groups in the MSCI China Index posted declines as the gauge sank 5.6%, the most since March 2020. Stakeholders are selling their holdings inn companies such as Tencent Holdings Ltd and Meituan, making their shares drop to record lows. In total, the three tech giants — Tencent, Meituan and Alibaba — lost more than $237 billion over 2 days (25-26 July). And the list could go on. 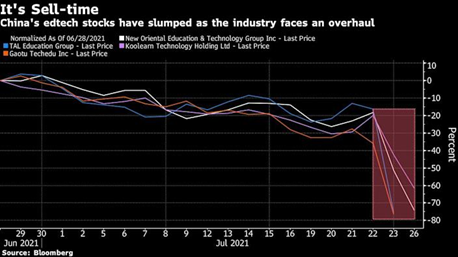 What does it mean for the global economy?

With large private tech companies becoming less powerful, the government is investing heavily in their state-run enterprises. They just announced a $33 billion subsidy program to support the development of their local chip manufacturing industry. With foreign capital markets becoming less hospitable to Chinese listings, becoming self-sufficient in important industries has become a strategic objective. It is likely to see state-run semiconductor companies receive significantly increased funding over the next few years. State-owned or state-funded enterprises will make up a greater share of economic output going forward. The latter enjoy explicit or implicit monopolies as long as the government continues funding them and they can survive indefinitely without making any profits. Concerning the giants, some might think that it is the right time to invest as prices are low, however time will tell if they will recover from this crackdown.