The story behind the yen's weakness

The selloff in the Japanese yen is getting ugly, experiencing outstanding volatility with the USDJPY exchange rate briefly testing 125. But will the 2015 Kuroda line serve as support this time around?

To many people’s surprise, despite rising geopolitical tensions, the safe-haven currency is among the worst performers this year. Yields and central banks' tightening plans dominate G-10 forex drivers this year, leaving the yen exposed, especially against the US dollar and commodity currencies like the Australian dollar and Canadian dollar.

At the beginning of the year, sources familiar with the Bank of Japan’s thinking had grown concerned over the government’s possible reaction if USDJPY hit 120. Last Monday, while the pair was trading around 122, the BoJ offered, for the first time, to buy an unlimited amount of 10-year government bonds to enforce the 0.25% yield cap. This surprising move further eroded the currency’s appeal and sent the pair to test the historic 125 Kuroda line – a level considered by market participants to provide support to the yen based on interpretations of comments made by the BoJ chief back in 2015.

US 2- and 10-year yields have gone parabolic in the last few months. The dollar got a boost from Fed Chair Jerome Powell’s 21 March remarks as he said that the US economy is in a very strong position and the Fed will do what it takes to bring inflation under control. That view was further supported by other Fed officials who pointed to the likelihood of a 50 basis points hike if inflation continues to accelerate.

In the meantime, BoJ Governor Haruhiko Kuroda announced his commitment to maintaining stimulus, particularly now, to support consumers as they are impacted by sky-high energy prices. This pushed the spread between the US and Japanese benchmark yields to the widest since 2019, now trading near 220 bps vs. about 90 bps at the start of 2021. Naturally, as USDJPY tracks the spread, the yen is down more than 6% so far this year.

A weaker yen is vital to ending deflation and achieving economic recovery according to Japanese central bank officials. Therefore, higher interest rates remain off the agenda for now. Consequently, the multitude of hikes announced and those that are expected to be announced by the Federal Reserve in the face of current accelerating inflation implies the bullish dollar-yen case is likely here to stay.

Besides the yield differential, the rise in energy prices is also making it hard for the yen to withstand the selling pressure. The safe-haven currency is down more than 10% against CAD and AUD so far this year.

The surge in oil prices is a clear negative for an economy like Japan’s that imports 90% of its energy. Historically, the yen tends to weaken when oil rises, while the Australian dollar, a commodity-rich currency, tends to strengthen.

Japan’s current account surplus (seasonally adjusted) in January was the narrowest since April 2020. The balance is likely to swing into deficit in the coming months, as higher oil inflates the import bill. Deterioration in the current account balance means another underlying source of support for the yen is crumbling. 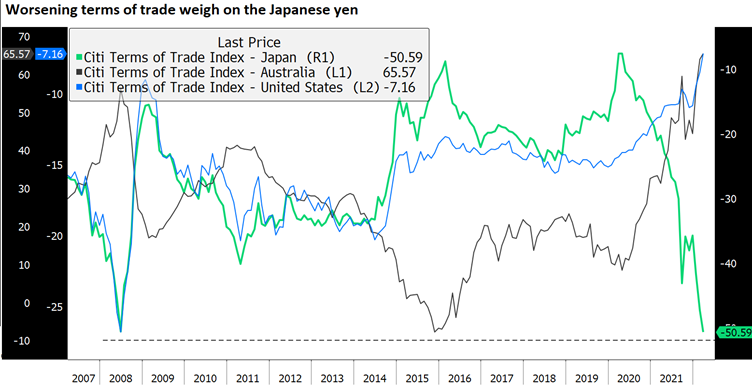 While medium- and long-term drivers such as a healthy current-account position and cheap valuation remain supportive, they alone are unlikely to change the take in the near term.

Upside catalysts to the yen

If inflation jitters evolve into worries about stagflation and/or the Russia/Ukraine situation escalates further, the bull case for USDJPY may be reconsidered. Rocketing oil and/or a risk-off situation would hit global growth and potentially slow the Fed rate hikes, providing a positive backdrop for a safe-haven currency like the yen.

Finance ministry vs Bank of Japan

Chief Cabinet Secretary lately said the government is paying close attention to trends in foreign exchange markets. For now, it seems that BoJ’s Governor Haruhiko Kuroda has convinced prime minister Fumio Kishida that any pain inflicted on households and businesses by Japan’s nascent inflation is best ameliorated by fiscal measures than by monetary tightening, adding that currency issues are in the domain of the Finance Ministry and not the BoJ. In that regard, comments made last month by the vice-minister responsible for the yen’s exchange rate suggest the ministry’s enthusiasm for a soft currency is waning.

Buy the rumor, sell the fact?

Historically, the first Fed hike supported the “buy the rumor, sell the fact” theory. During the past three hiking cycles, the US dollar lost momentum and weakened against the yen following the first Fed hike. If history is any guide, this could reverse the current trend.

Central banks' monetary tightening plans and the associated yield differentials are steering the G-10 FX market in early 2022. Japan's past yield-driven underperformance is expected to occur again in 2022, particularly as the BoJ is nowhere near considering rate increases. This implies that the yen remains vulnerable. However, it is important to keep in mind that the yen’s real effective exchange rate is at its most undervalued in nearly half a century, and open interest data from the currency futures market suggest the short yen trade is getting increasingly crowded, meaning the risk to further downside potential is limited.