We have all heard of SpaceX, and the recent commercial space flight events, but the space world is not limited to rockets! Swiss-based Astrocast just went public in Oslo. They lower the cost of managing remote assets using an IoT network of low orbit nano satellites. It's very cool stuff. 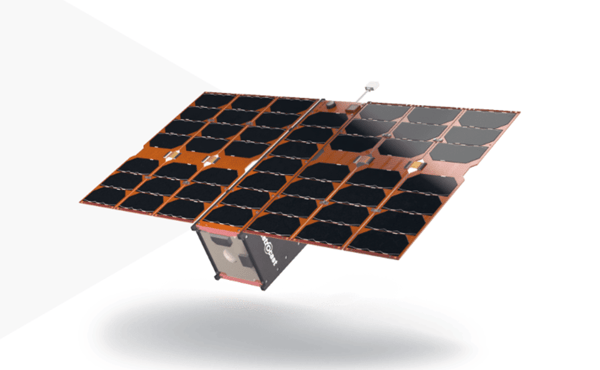 Image of the Astrocast nano satellite

Did you know that Sputnik means satellite in Russian? Anyway, enough about covid and vaccines... let's talk about space!

From the team that brought you the SwissCube out of EPFL (the Swiss MIT) comes Astrocast, a company of 71 employees building tiny satellites. They make low orbiting nano satellites sold as an asset management and surveillance tool for businesses’ remote assets. In essence, Astrocast is a telecom company enabling fast messaging between remote devices.

The value added is clear for those businesses operating assets in remote places; think desserts, islands, oceans, mountains, and large plains. A large agricultural company based in Ohio, with sheep in Ireland for example, could more easily assess its livestock from a distance and give and receive orders about the asset without going through an expensive satellite. Customers will be buying the hardware (modules and chips) and pay recurring revenue in monthly subscription plans to Astrocast at a price point between $0.5 and $3.0 per device.

This telecom operator only focuses on IoT, i.e., short messages (it is not a broad band operator), its censor data and infrastructure is based on a network of nanosatellites. These are produced and also operated by Astrocast, in-house. Founded in 2014, Astrocast was the first to think about addressing the IoT market in remote areas using nano satellites, but today there are between 15 and 20 competitors. In reality though, there are five main rivals in Myriota, Kinesis, Swarm, Hiber, and Iridium, but Astrocast CEO Fabien Jordan is confident in his company’s incumbent position and go-to-market plan. 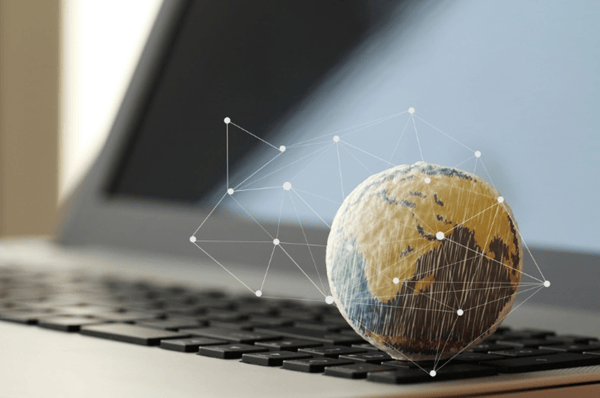 Not exactly. It’s more that only about 10% of the planet is covered by a cellular network i.e., 10% is covered by terrestrial networks. 90% of the planet cannot truly connect an asset and relay data or messages using the current ground infrastructure and their databases. So everywhere else (90% of places), businesses rely on satellite connectivity—which actually exists everywhere, but is not cost efficient at all. So, Astrocast is here to solve this cost problem.

Astrocast has recently partnered with Airbus to co-develop a data protocol that manages traffic generated by devices on the ground, which means they have access to some of the best spectrums to transmit data between machines and Astrocast satellites. When the full constellation is operational, Astrocast expects a maximum latency response time of 15 minutes between devices.

Where does all the transmitted data go? Astrocast hosts it. The large database system upon which customers of the tiny satellites IoT network can safely store and access their data is built in-house in the Mission Control Center using an API called REST. Not exactly the decentralized fairy tale of the crypto world, but this technology works.

A high growth company in a fun ‘’space’’ 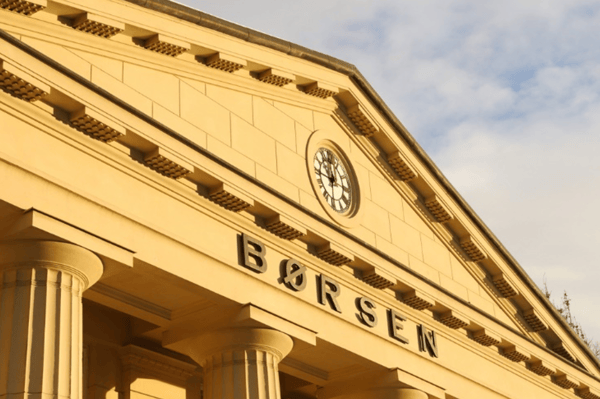 Yesterday, August 25th, was the official day Astrocast’s shares began being sold on the Euronext Growth, a market in Oslo specifically designed for smaller growth firms. These firms are at a younger point in their business’ lifecycle and thus suffer less extensive rules than at other exchanges. This also implies that investing in these companies presents investors with higher risk since the rules for market entry skip some of the most rigorous steps. CEO Fabien Jordan picked Oslo because this market is in a part of the world where these types of ventures are in high demand, and also he says many clients are located in Scandinavia. Now that it’s on the market, here’s what you want to know:

The go-to-market strategy for the nano satellite company relies on tackling a broad number of channels, but as the network continues to ramp up its scale (i.e., the network is just not fully operational yet) it will have to focus on customers that require once-a-day only connectivity. Initial industries will therefore be those in tank monitoring, environmental applications, agriculture, livestock, and wildlife tracking (you see why Oslo makes more sense now?).

Because Astrocast has so many actionable use cases for expansion however, it will be interesting to monitor just how much it positions itself alongside Palantir as a sort of government data supplier. Maybe it will also decide to enter other industries like mortgage insurance and do rooftop monitoring for property auditing. Actually, Astrocast is working with Palantir already to feed data via Palantir’s Foundry software so its getting recognized quickly.

The next graphic shows you a proxy for their TAM, looking at the growth in the number of cellular IoT connections. The IoT market is showing a lot of promise, and Astrocast will be looking to position itself as a central provider of nano satellite technologies. By the way, nano satellites only weigh between 1 and 10 kg! 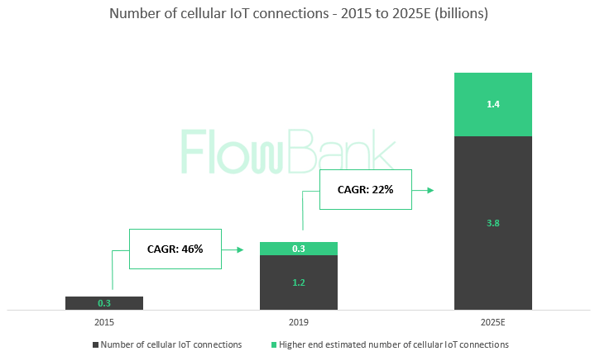 Assuming a market share of 25%, the firm estimates revenues to reach CHF 150 million by 2025. As the entire constellation of satellites (its network) is launched into space, costs should continue falling from scaling, and customers should increasingly be joining the club. Breakeven EBITDA is planned for 2024 and with Astrocast’s total financing need currently sitting around CHF 120 million, a budget needed to deploy the full constellation, the IPO comes in at an appropriate moment. So far, revenues have been negligible at half a million CHF, down from one million the year prior, not to talk about multi-million dollar R&D expensive, but that goes without saying that for an early stage firm it's completely normal.

Space debris risk. But how much is there? 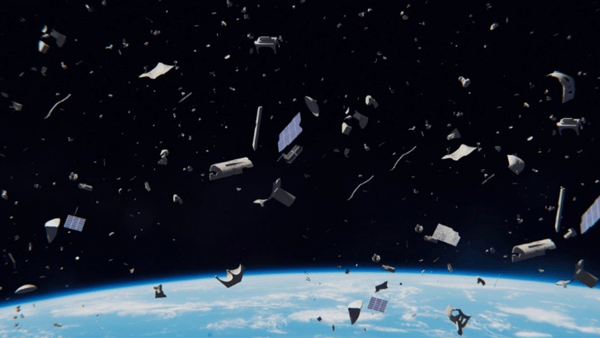 It is exciting to study space companies just because the risk section on filing reports is a change of air. I mean, where else do you read about space debris other than science fiction novels and movies? However, while space debris is a cool risk to list, it’s also a serious problem for miniature satellites.

Astrocast has planned for his of course being engineers and all, equipping the tiny satellites with collision avoidance propulsion maneuverability. However, when these little satellites are launched into space it can both become a threat to other moving objects and be threatened by space debris. Any damages done to other objects in space will of course be paid for here on earth. To address this, the company has entered into a third-party liability insurance policy for all its assets, and it’s quite expensive (four million CHF liability!).

According to NASA, there are more than 27,000 pieces of orbital debris tracked by the Space Surveillance Network sensors. Debris and spacecraft travel at extremely high speeds of about 15,700 mph in low Earth orbit so contact between debris and assets could lead to a lot of damage, if not complete destruction. From a long-term standpoint, this is not great. In 1996 for example a French satellite was hit by debris from a French rocket that had blown up 10 years prior. With more debris accumulating each year, the risk of collisions grows by the day. 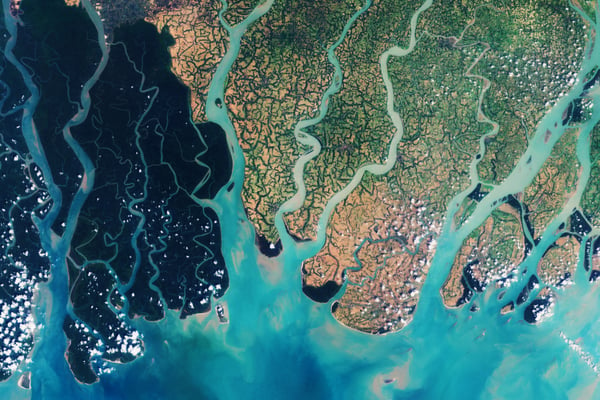 Cool view from space of the Sundarbans