Apple stock has fallen after a “boring” September product launch event that saw the release of the Apple iPhone 13. After a massive run up, have AAPL shares topped?

The Apple product launch was on September 14 and AAPL shares fell before and after the event. The stock is on course to fall for a second week.

Trying to call the top of a stock is normally a quick way to the poorhouse - BUT the technicals have started to fade for Apple.

The stock has continued to track higher in 2021 - hitting a new record high in the run up to the launch event. Against a backdrop of a ‘rotation into cyclical stocks’ Apple has held up relatively well. Nonetheless, the shares have barely made progress beyond psychological resistance at $150 since the summer of 2020.

What’s so bad about the iPhone 13?

Apple’s new iPhone 13 is better, but not by much

For what it’s worth - this was the title of the post-mortem article by the New York Times.

iPhone 13 is here, and Apple upgraded the battery, storage

Looks like we are taking the other side to Fortune Magazine

In the age of TikTok, the BBC might be right to focus on this new camera feature.

As a reminder, the iPhone is still at the core of Apple, providing about 50% of its profit. 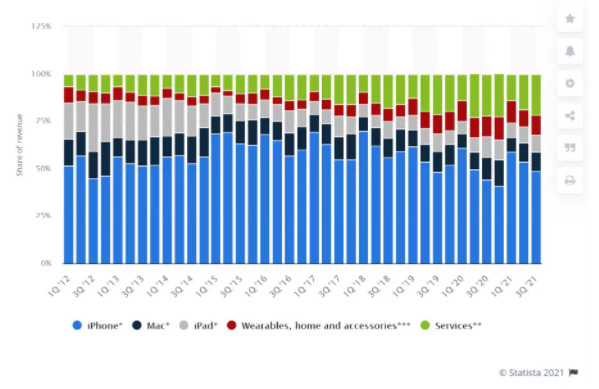 We can summarise the upgrades as better battery life and a new swanky camera. All four models support a new Cinematic mode which brings Hollywood-style rack focus to the videos you shoot.

Away from the iPhone

Given that the 13 is in essence just a minor upgrade from the 12, which was the first 5G model - it particularly important to look at other area for optimism or concern around the stock.

The general takeaway from analysts is that the court’s ruling was that it was a big win for Apple, though that has not been the response from investors who have sold down the stock since. The only sticking point is that Apps will be able to include links to third party payment methods. For Epic Games and others, this has been rendered useless however because Apple is still entitled to collect whatever percentage it wants from the app developers - either through the App store or by invoicing them for a cut of whatever was earned though these third party payment links.

People tend to hold onto their phones for a few years so Apple doesn’t need to sell the 13 to owners of the 12. Owners of older models who didn’t buy the iPhone 12 may well choose to buy the iPhone 13 anyway as the newer model, even if the upgrades are limited. The reason a whole swathe of iPhone users might choose to upgrade now is to get 5G and the extra capabilities that brings with it.

Apple launched a new Apple Watch featuring a slightly larger screen, which will cost from $399, with availability set for the autumn. A new iPad Mini was also debuted with 5G technology and a USB-C port with the display improving over the previous model with edge-to-edge display. The iPad mini will start at $499.

It’s not really cleat yet why you’d need a 5G connection - there aren’t a whole lot of commonly known use cases. Messaging, social media and most mobile games work just fine on 4G. Presumably this will change over time, especially with VR and AI but predictions of a massive super cycle happening in 2022 might be overblown.

The Delta variant is creating some uncertainty about how Apple supply chains might be adversely affected.

"We believe growth in iPhone revenue in calendar fourth quarter will be challenging for Apple but we continue to flag a low level of confidence in our ability to predict demand given the complex interplay of issues like the Delta variant, supply shortages, the end of stimulus and high consumer savings," said Goldman Sachs analyst Rod Hall.

This brings us full circle to our 3-year price chart. The Apple share price may well have already priced in a 5G super cycle and there are no major new catalysts on the horizon.